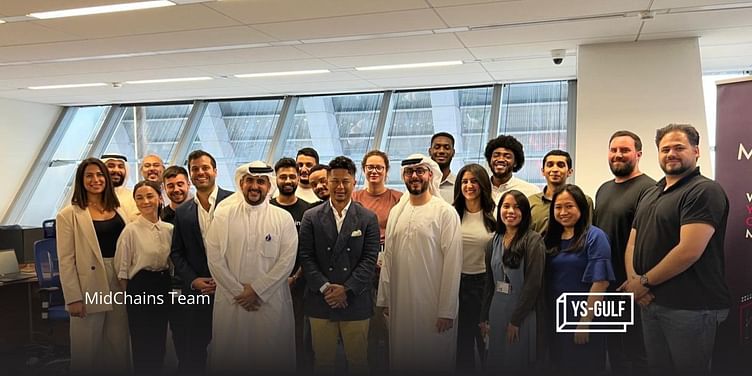 Abu Dhabi-based MidChains is the first entity in the region to be regulated by a regulatory arm of the Abu Dhabi Global Market and is backed by Mubadala Investment Company. It is now working on a retail-friendly app.

The year was 2017. Basil Al Askari, who worked in the financial services industry, began to take a keen interest in the world of crypto. One thing he immediately noticed was a lack of options for investors to deposit capital, make investments, and smoothly exit the banking system.

Basil, who was part of the corporate funding at ﻿Mubadala﻿, also noticed that there weren’t many service providers in the blockchain and cryptocurrency space who could meet counterparty risks and compliance requirements.

"There were hardly any players that could work directly with banks or large sovereign and hedge funds who have stricter compliance requirements. It was restricted to those trading a few $100 a day," Basil tells YourStory Gulf Edition.

Taking note of these gaps, the duo decided to quit their jobs, put their decades worth of experience to work and set up MidChains—a virtual asset trading exchange. Through this exchange users can hold digital assets directly, with the same fees applicable for all levels of trade positions.

MidChains is the first entity in the region to be regulated by a regulatory arm of the Abu Dhabi Global Market and is backed by Mubadala Investment Company—a state-owned holding company that is like a sovereign wealth fund.

The first order of business was to understand jurisdictions which could become regulated. In 2018, the Abu Dhabi Global Markets (ADGM) had an amenable conversation about building a fully regulated exchange and custody business based out of Abu Dhabi.

"The guidance for regulations have been in the works since February 2018, and while we didn't think our recommendations would be considered since we were a crypto exchange, the opposite happened," says Basil.

MidChains applied for the license and built the infrastructure for the exchange, tailored to the regulatory requirements. It spent three years on the licensing process until it was ready for launch. Even today, there are several misconceptions associated with what it takes to license a crypto firm, adds Basil. Many of these are associated with the asset class itself.

The firm underwent a rigorous, detailed assessment process while building the exchange. This has helped it become a key player in the crypto space, adds Basil.

“We've been more focused on the institutional market, mainly because our compliance requirements are a bit stricter than what the average kind of individual crypto trader is used to,” says Basil.

Things changed dramatically for the crypto landscape after the ﻿FTX﻿ meltdown. The level of scrutiny into the space both from investors and retail investors began to grow. However, Basil says MidChains remained unaffected by the episode.

“Our business models are different. From a regulatory capacity, we operate completely as an exchange. Here you're directly matching buyers and sellers, rather than taking a principal position in the middle, where the brokerage model, on the other hand, does take, oftentimes, principal positions in between trades,” says Basil.

Binance, one of the world's largest crypto exchanges by trading volume, also received its cryptocurrency license in May last year and counts Central Bank of Bahrain (CBB) and the Economic Development Board as backers.

“I think on the one hand, you will have the longtime kind of crypto investors that have been in this that have been individually involved in the space for a long time, moving more towards DeFi markets and towards self-custody…not relying on institutions in development,” says Basil.

Equally, on the institutional end, there will be a flight towards more regulated institutions with individuals looking to take counterparty risk assessments more seriously, he adds.

MidChains is also looking to be more retail-friendly, besides adding on to its institutional offerings.

Disclaimer: This story has been updated to correct the name of a source mentioned in the story and update some information.