A fintech founder in a Dali mask, geekdom, and War & Peas in the Return of Comic Con 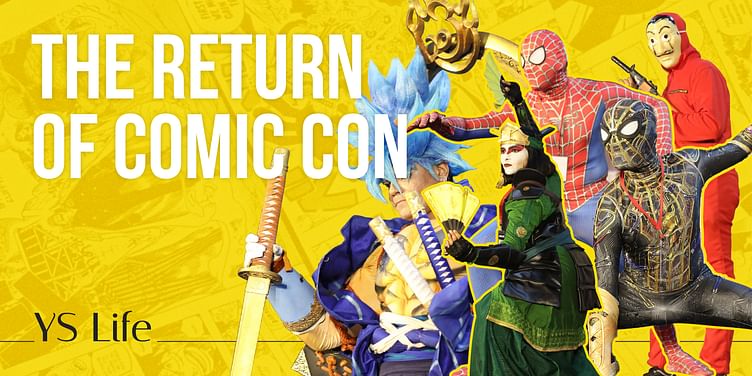 After a hiatus of two years, the greatest celebration of pop culture returned to India with cosplay in full flavour and an array of international and domestic artists.

On most days, Sanjil Jain is busy building his fintech startup in Bengaluru. This past Saturday, though, he walked into the KTPO Trade Centre at Whitefield in a red jumpsuit, a Salvador Dali mask and an AK-47, fake, of course. His friend Deeksha Sharma, a post-doctoral research fellow at Cornell University, was similarly costumed.

“The energy here is crazy!” said Sanjil in his Money Heist costume, waiting to participate in the Cosplay competition at Bengaluru Comic Con. “Bengaluru is up top when it comes to love for pop culture, and you can see it here at Comic Con.”

The mega pop culture festival’s return to India transported participants in the sold-out Bengaluru edition to a universe of fandom and make-believe, allowing an escape for some, and a connection for others.

“It is surreal that we have completed a decade and are able to continue celebrating our fandom at this enormous scale,” said Jatin Varma, Founder of Comic Con India.

For Sanjil and Deeksha, who have participated in the New York Comic Con previously, the Bengaluru edition was a fresh entry into geekdom. “We were just in this queue when a kid started singing Bella Ciao looking at us. There are children here who are barely two or three years old, as well as adults who are 45 or older,” she said. “It’s a crazy celebration!”

Female pleasure and storytelling: Seema Anand is breaking sex myths, one reel at a time

Jam-packed with comics, merchandise, artists, cosplayers, musicians and a whole lot of fun performances, the convention brought together people who live and breathe pop culture.

It had a roster of new and old, national and international illustrators, artists and cartoonists. From DC and Marvel artist Raymund Bermudez to Raj Comics founder Sanjay Gupta, and from Jonathan Kunz of War and Peas to Derek Domnic D’Souza—fans thronged the booths to click a selfie with or get an autographed illustration from their favourite artists.

“For artists, ComicCon gives a good exposure and a good idea about the scale of interest in the industry. In a place like India where art is usually seen as a hobby, you come to these events and then see the real interest,” he said. “It really builds up a lot of hope and shows you that there’s so much opportunity.”

Sanjay, too, was at his first Comic Con, catching a glimpse of new and upcoming talent of illustrators, who, he says, should prioritise creating for the country.

“Judging by the level of appreciation for comic books in India, cartoonists and artists should really focus on creating Indian characters that Indians can relate to and appreciate,” he said. “We must also focus on improving sales of these comic books in the country first before trying to compete with the West.”

A highlight of the Bengaluru edition was the standup routine by comedian and writer Sapan Verma, somewhat of a Comic Con India veteran.

“It’s amazing how Comic Con India has completed 10 years. I myself have been associated with it for four years,” he said. “This was my second year at Bengaluru Comic Con and the crowd was fantastic. It's one of my favourite cities to perform at and amazing to see people of all ages enjoying my 40-minute set here. I had a great time," he said.

The next conventions of Comic Con India will be in Delhi on 9-11 December, and in Mumbai on 11-12 February.