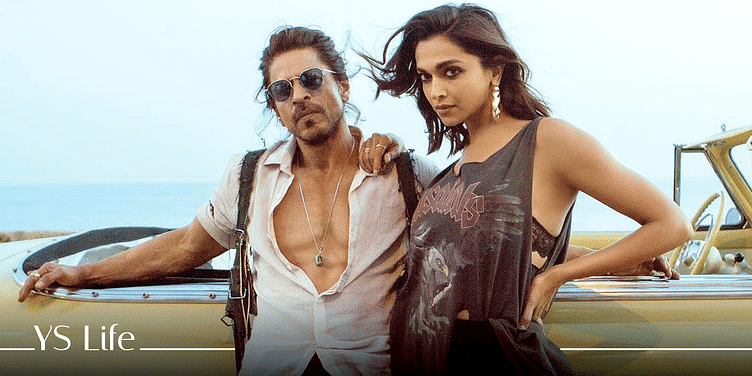 Over four years after his last leading role in Zero, King Khan's latest outing Pathaan is a slick action flick. Does it live up to the hype?

King Khan, the Badshah of Bollywood, India’s most romantic hero—these are a few fitting monikers Shah Rukh Khan goes by. The superstar’s charismatic screen presence is enough to make us mere mortals go weak in the knees.

Now, after four long years and a series of debacles, SRK is back on screen with Pathaan, donning the role of an action hero. And let’s just say he packs a punch!

A ripped body with washboard abs, long grizzly locks, and suave moves—SRK has clearly gone above and beyond to ensure he does justice to his part. Making his audience swoon is a bonus.

Ever since the first rushes of Pathaan were out, fan frenzy has been at its peak. The film also found itself at the centre of controversy, with a section of people condemning the colour of his co-star Deepika Padukone’s saffron bikini in the popular song Besharam Rang.

But SRK’s fans remain undeterred. Even amid a growing call for #BoycottPathaan on Twitter, the film sold over 5.6 lakh tickets for Day 1, surpassing K.G.F: Chapter 2. This is despite it being a non-holiday!

YS Life reviews Pathaan to tell you if it's worth the hype or not.

Directed by Siddharth Anand of War and Bang Bang! fame, Pathaan has all the ingredients needed for a blockbuster—stunning locations, high-octane action sequences, a plot high on patriotism, and of course, a stellar cast. By now, it's pretty obvious that Pathaan is an out-and-out SRK film, but ably supported by Deepika Padukone, John Abraham, and Dimple Kapadia, who shine in their respective roles.

In Pathaan, SRK plays the role of an ex-armyman who has been tasked to save Kashmir from the hands of a rogue RAW agent—a very chiselled Abraham aka Jim. There are tons of chase sequences on trains, in the air, and even on ice, so be prepared to hoot your heart out!

Being the antagonist is not easy and it's quite visible that Abraham has put his heart and soul into the role. Unfortunately, his dialogues don’t pack as much heat as his punches.

Padukone, playing the role of an ISI agent Rubai Mohsin, is India's answer to Lara Croft. Not only does she scorch the screen with her presence but also stands her ground in action sequences.

It's always a joy to see Kapadia—she’s still as graceful and emotes like no other. Rana’s role may not be very big but he's a pleasant addition.

On to the surprise package…spoilers ahead! Salman Khan makes a much-rumoured cameo. The moment ‘Tiger’ and ‘Pathaan’ appeared in the same frame, whistles and claps rang through the theatre, proving their immense star power.

SRK’s dialogue, ”Apni kursi ki peti bandh le, mausam bigadne wala hai,”, pretty much sums up the experience because Pathaan keeps you on the edge of your seat—mostly.

Of course, there are some loopholes.

While the action sequences are well-choreographed, they sometimes feel a bit stretched. The VFX isn’t as impressive either! For me, the 146-minute runtime seemed a little too long. The editing could have been sharper, particularly in the second half, when you are dying to see the climax.

There were also some dialogues unnecessarily loaded with sexual innuendos. The filmmakers obviously added them for some comic relief but they weren't funny. Also, an SRK film just deserves better, I'd say.

The storyline seems a wee bit illogical at times, but let's face it…we are here to honour the man of the moment. No one promised us an intelligent film, right?

Bollywood has been having a rough ride for a long time  but SRK’s star power may just help give the industry the boost it needed.

This Republic Day (or later—we leave it up to you), go watch SRK save Bharat Maa in his slick comeback Pathaan, a film laced with patriotism and some delicious action. A pure treat for cinemagoers!

(The story was updated to fix typos)