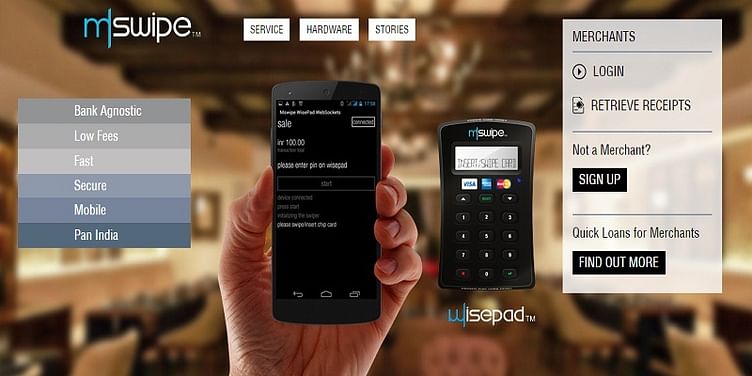 Mswipe is a Mumbai-based merchant acquirer and mobile POS solutions provider. The company has announced that it has closed its Series C funding of US $25 million. The Series C round included participation from new investors Falcon Edge Capital, Ola Cabs and Meru Capital as well as existing investors Matrix Partners India, Axis Bank, and DSG Consumer Partners. Mswipe will use the funds to further accelerate its aggressive growth and customer success.

Mswipe launched the first mobile POS solution in India in 2012 with a card reader which could be attached to any mobile phone’s audio (headset) jack. Building on, the company launched an EMV Chip and Pin compliant mobile POS solution, WisepadTM, in December 2013 and SmartPOS, an Android phone which can be used for card payments – WiseposTM in June 2015. Mswipe works with smaller banks such as Corporation Bank, Ratnakar Bank, SVC Bank and also large banks like Axis Bank. Mswipe is also present in the Middle East, US and SE Asia through partnerships.

“We believe in serving the smallest of merchants. India currently has 12-15 million SMEs and mobile POS is the only channel which can efficiently link these SMEs to mainstream financial services. Today less than 500,000 SMEs have any type of POS. We invite all stakeholders in the financial services and technology ecosystem to partner with us to offer best in class financial services to small merchants” said Manish Patel, Founder and Managing Director, Mswipe. The company aims to provide mobile POS solutions to 1 million merchants across 400 Indian cities and towns and create India’s largest financial services platform for SMEs.

"Mswipe has demonstrated exceptional growth and is well poised to be the category defining mobile only, financial services platform for SMEs. The company has a highly innovative business model based on its product innovation edge, cost effective mobile solutions and a significant nationwide sales capability,” said Rishi Navani, Managing Director, Matrix India.

Mswipe currently employs over 400 people and has a pan-India direct sales agent network to provide after sales support to its customers. The entire mobile POS solution comprising of mobile application on multiple mobile platforms, payment gateway and encrypted card reader, has been developed in-house by Mswipe’s development team. Mswipe’s proprietary WisepadTM and WiseposTM are EMV, PCI-PTS and NFC compliant mobile POS and the solution is already in use with more than 25,000 merchants across India.

The payments space has picked up full steam with technology startups doing some solid on the ground work to bring in efficiency. Ezetap is another growing startup which raised $8 million ion 2014 and has a range of solutions. The likes of PayU and other players in the space have also pulled up their socks to build a strong payments foundation which will enable a lot more commerce online.