The Delyver story: trials & triumphs of being a first mover in hyperlocal commerce and foodtech 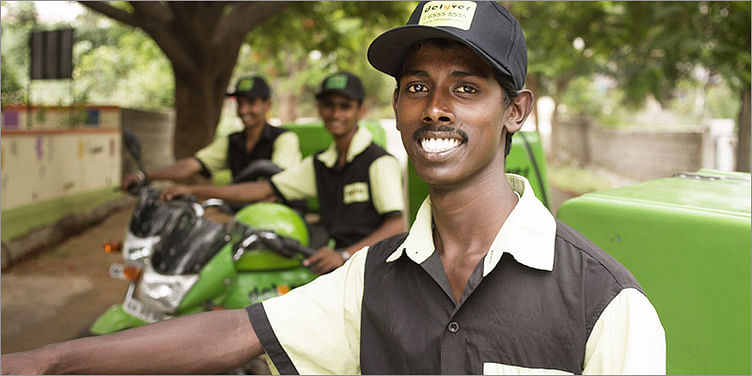 The head office of Delyver, a five-year-old Bengaluru-based hyperlocal delivery company (recently acquired by BigBasket), is surprisingly sparse and basic. The only decoration across the two floors of office space is a series of simple A-4 size posters highlighting market innovations and business models pioneered by Delyver in India: “First hyper local commerce platform in India for on-demand home delivery,” “First aggregator of home cooked meals under the Home Chef(s) program,” “First to introduce ‘no minimum order value’ in home delivery in India,” and so on.

The posters tell a story that the unassuming founders of Delyver – Afsal Salu, Praful Thachery, and Reebu Varghese – are reluctant to volunteer in person. The company was indeed a first mover in many of today’s hottest segments several years before these segments even had names – hyperlocal commerce, food tech, on-demand food delivery, and the inventory-free, marketplace model.

“In fact, we believe that we may have been the first to actually use the term ‘hyperlocal’ in the context of delivering food and produce from local restaurants and shops to residents of the locality,” says Praful only half-jokingly. “We were struggling to describe to potential investors what Delyver did and found this word in a study by some US university and used it. We later found that the term had become the buzzword to describe this type of business.”

(Disclaimer: Praful is not claiming that he invented the term or its usage. He’s merely talking about his team’s experience of having serendipitously stumbled upon the term when its usage was not as widespread in a commercial context; the term was earlier associated mostly with content.)

The guys at Delyver came up with many more such innovations that eventually went on to become part of the ecosystem for foodtech startups.

Since we had no precedent before us, we had to figure out things as we went along. For instance, in 2011 there were no suitable options available in the market for the packaging of home chefs’ food and for delivery bags that kept food warm. Therefore, the three of us sat together and designed food containers and delivery bags from scratch and commissioned a manufacturer to make them. That manufacturer today uses the same design to provide containers to many of our competitors,

says Afsal with a mixture of pride and resignation.

Delyver was founded in 2010 by three friends who studied together in IIM Lucknow. The initial funds were taken from the founders’ personal savings from six years of corporate work. The team first started its restaurant delivery services in Whitefield, Bengaluru, and soon moved into a few other neighbourhoods.

“We built our early relationships with restaurants by making cold calls to ask if they were interested in letting us handle home delivery for them. As there was no listing fee and payment was commission-based and not lead-based (that is, we got paid only for the orders that we delivered), most restaurant owners saw it as a no-risk proposition and signed up with us,” says Afsal.

Convincing customers to order through Delyver was a different ballgame. Many customers were not used to the concept of home delivery and Delyver needed to win their trust by proving to them that its service was reliable.

Delyver’s early marketing efforts were mainly through below-the-line (BTL) advertising options like fliers and, later, the Delyver ‘book’ which listed all the businesses they deliver for (including restaurants, florists, bakeries, grocery shops, and meat and fish stores) and other services like Home Chefs. Says Praful,

But our best advertising was the word-of-mouth reputation we built for executing orders well.

The fledgling team struggled to get its information technology right, though their engineering backgrounds did help. “Luckily, Android happened,” grins Praful. Even so, Delyver was slow to get on the customer-facing app/website bandwagon. “Initially, we were focussed on getting the back-end technology right,” explains Reebu. Delyver developed apps and other software to enable restaurants and stores to receive and even print out orders in real time. It also developed an app and GPRS printer technology to help its delivery boys track orders. “Today, 60–70% of our business happens through our mobile app,” adds Reebu.

Delyver’s employee focus has paid off in the long run. “Our original team is, by and large, still together,” says Praful.

Many of our early employees have grown with the company. Our first call centre employee, for instance, is now a city operations head,

he says. The company started with the three founders and is now 300 plus strong (including delivery boys). Delyver recently adopted the entrepreneur model for delivery boys, which empowers them to be their own bosses and set their own financial goals.

Delyver started with funds of about Rs 30 lakh from the founders’ personal savings. Two years later, in 2012, the team raised about Rs 1.4 crore from fellow entrepreneurs Meena and Krishnan Ganesh. “Back then we were naïve enough to think that the money would be sufficient for us to scale across Bengaluru. We actually managed to cover only four neighbourhoods with that round,” says Afsal with a wry smile. In 2014, the company finally managed to raise $1 million from Agnes Capital and private investors. This influx allowed the company to expand across Bengaluru and to build the necessary technology, including a good website and app.

In June this year, online grocery store BigBasket bought Delyver in a cash and stock deal. The acquisition was reportedly part of BigBasket’s strategy to develop its last-mile delivery capabilities. According to news reports, BigBasket is planning to leverage Delyver’s experience in hyperlocal delivery and its trained fleet of delivery personnel to offer a one-hour delivery promise. “The acquisition gives BigBasket the ability to straddle both e-commerce and hyperlocal segments,” says Afsal. BigBasket and Delyver are currently in the process of expanding operations to eight cities across India.

So, with the benefit of hindsight, what would the founders have done differently? Says Afsal.

We don’t have any regrets as such because the experience of starting up Delyver was a huge learning experience for all of us. But if it was at all possible, we would have timed our entry into this field differently. We were ahead of the curve and could not scale the business for the first four years or so. I believe that fast growth and a good team are essential for success in this space, and both require large amounts of funds.

Praful adds, “That said, we’re happy that in these five years we took care of all our stakeholders – employees, investors, and customers.”

Future of hyperlocal commerce in India

“This space has recently seen the entry of several new players, both big and small, and, clearly, the market is ripe for consolidation. When that happens, we believe that teams which can execute the work well will remain, regardless of the hype and the funding generated by the competition.” Though Praful leaves it unsaid, the twinkle in his eye and the unflagging enthusiasm of the team even after five years of struggle suggest that the trio believes that the model pioneered by Delyver is likely to prevail.

So while the brand’s future post-acquisition is not yet clear, it looks like the ubiquitous two-wheelers with Delyver printed on their carriers will continue to zip through our roads for the foreseeable future.