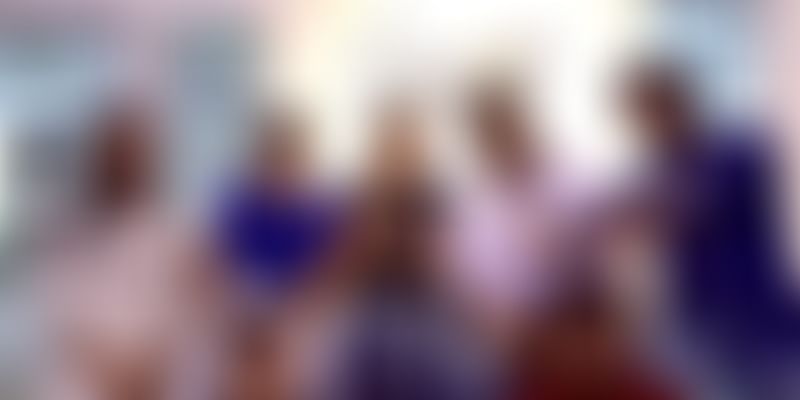 Over 295 billion gigabytes (or 295 exabytes). That’s the amount of data we have stored since 1986. The number is simply mind-boggling. Fortunately, we have several compression servers in place that help reduce the number of bits needed to represent data. This in turn can not only help save storage capacity but increase the speed of file transfers and also reduce the cost of storage of the hardware and network bandwidth.

This is exactly what Skcript’s SHRINK does. It is a compression server that uses several compression algorithms, where each file is analysed, and a machine-learning technique is used to compress the data. “We train computers to arrive at the best possible lossless compression for the customer’s unstructured data,” says 27-year-old Karthik K, Founder and CEO, Skcript.

SHRINK is a server (hardware), which runs with what Karthik calls their 'own flavour of Linux,' with their algorithms and proprietary software.

When they started out, the team thought building a software product would be enough for the enterprise customers. “But we were wrong. We then expanded our requirement to building our own server, which runs SHRINK. It’s more like how iOS and iPhone work beautifully with each other,” explains Karthik.

He says that the initial working prototype was created in under 60 days. However, the amount of effort that went in to manually decide the best compression methods for every file type was tedious.

Working on the product

The team nevertheless began by iterating the prototypes that they needed to build in order to automate the process. That’s when they decided to use machine learning. Explaining this Karthik says that the more you use the system, the more the machine learns about your data and it tweaks itself to handle your data better.

“SHRINK comes with pre-defined training data, which makes it robust and stable. In simple terms, the production version of SHRINK works like it has a brain of its own,” adds Karthik.

Once the data reaches SHRINK, the machine learning and computer vision algorithms analyse the file and compare it against over 1,000 data points. After analysing the file, they start compressing each file carefully.

SHRINK has over 16 different algorithms to support over 6,000 file types overall. So any file can be compressed at this point. Once the compression is done, it generates a report, and the file is then sent to the desired storage location that the admin set up initially.

On retrieval, the file is fetched from the storage location, decompressed to the original state, and is sent back to the end-user for his own use. Karthik adds that as of today, the system has been tested with over 1.5 petabyte of data, and the team is constantly testing the system with automation tools 24x7.

“The beauty of this technology is the speed at which these things operate. The compression and decompression speeds are the best we’ve ever seen, and we are working to improvise on this every day,” says Karthik.

Started by friends Karthik and Swaathi Kakarla, most of the core team at Skcript was built with the help of the community Google Developers Group, Chennai. The duo got together during a fest and bonded over their mutual passion for development and coding.

Companies buy SHRINK from the team. The users have an interactive UI, which helps them access their files easily. “The end users have access to files which were archived and were not accessible for years together. This has also been a major selling point for us,” adds Karthik.

SHRINK acts as the middleware between the end user and the storage arrays. User uploads his/her data using the web portal or desktop sync application, the data is passed through SHRINK, and SHRINK handles the data and passes it on to appropriate storage array.

Starting with the idea

Karthik says that the idea of building a platform that can compress data had been in their minds for a while, but they never really got to work on it seriously. However, one of the organisations that was a part of the community Google Developers Group, Chennai was unable to handle the data explosion in their organisation. The growth at which their users consumed data was humongous and it never ceased to stop.

“We saw a real potential over there, and we thought it would be challenging to work on an age-old problem that has not yet been solved. And from then on, we have been working towards building and iterating our servers to handle data compression very efficiently,” says Karthik.

However, being bootstrapped, the duo found it very difficult to build the product and work efficiently. Karthik adds that at one point they went completely broke. He adds that it was sheer perseverance that got them through.

Having created a failed startup in his college days, Karthik knew he had to do the best to ensure that a great product is built with the backing of great culture and expertise. “I wanted to learn the art of creating the best from companies. I went on to work with companies like Apple, Pearson Education, Wipro and a variety of different companies from different fields,” he adds.

SHRINK has over 10 large customers from Fortune 500 companies and claims to have a revenue of a six figure-dollar value. Karthik adds that they will be double their revenue and customer base this year.

The IT Admin from GNE Dubai, one of the oil piping manufacturing setups in Dubai, says that initially they were sceptical if such a technology would help them. However, the team decided to take a leap of faith and try SHRINK out. He says that today there are close to 350 users of SHRINK in their organisation and they’ve cut down costs to more than 40 per cent.