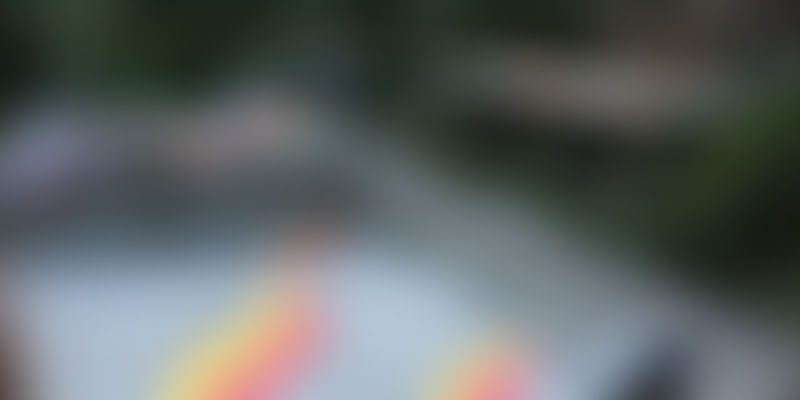 Try googling Gunehar in Himachal Pradesh, and all you get is a small map and a few postal details. In two weeks, however, this is almost certain to change.

This small, sleepy village -- located in Kangra Valley -- is playing host to ShopArt ArtShop, a unique art festival, which will have the whole village turning into a vibrant canvas. Over the course of last one month, several artists have stepped out of their comfort zone, stayed and worked with village craftsmen and artisans to create art installations, textile-based products, and paintings that will finally be all up from June 7 to June 14 for visitors.

Delhi-based Puneet Kaushik, known for his large-scale installations and cutting-edge mixed media work, is one of these 10 artists. Kaushik has co-curated this festival with Frank Schlichtmann and Ketna Patel while also working on three art projects for the festival.

View from the top

“The idea is to bring contemporary, folk, and tribal art together, to make it more usable in today’s context. This is needed to sustain folk art in India,”

says the 44-year-old, as he puts the final touches on the Kangra miniature paintings he is creating in collaboration with the village’s artisans.

These 10-odd artisans are the only ones working in this style now. “I have always worked towards reviving the dying art forms of India,” says Kaushik, who in his capacity as one of the directors of Dastkar, did a project in Bidar to revive the Bidari craft of silver inlay in metal alloy. Another element he has used in his paintings often is bead work, derived from the almost extinct embroidery style of Tibet and Burma.

For yet another project at the Gunehar festival, Kaushik wants to create an aerial impact. Gunehar is a village with a voting population of only 2600 people but is known as Asia’s most significant paragliding venue. Kaushik has used waterproof paint to create leaf-like drawings on the houses’ rooftops, so that when you glide down from the parachute, you see a colourful, flowing river of leaves.

His third project – in his signature style of creating large-scale installations is titled People Who Live in Glass Houses. Using recycled yarn and boulders from the local area, he will convert the four bedrooms of a deserted house into a living, breathing space.

Design has always been Kaushik’s strength. He began his artistic journey in Class XI when he was studying at General Raj’s School in Delhi. He had already begun to design furniture for embassies, private residences, studios and offices followed by a career as an illustrator for magazines at Media Transasia.

While in college at Jamia Millia University in 1992, where he was studying a four-year-course in fine arts, he designed for the Handicraft and Handloom Corporation of India and Central Cottage Industries Corporation of India. In 1998, he went to Berkeley College in California where he studied mixed media art. It was this eclectic educational background that honed Kaushik’s ability to express in varied mediums. He says,

"I had been exposed to the western culture, but nostalgia and a strong pull by my Indian roots saw me packing my bags as soon as I finished my course at Berkeley."

As a child, his earliest creative pursuit was making New Year and Diwali cards. "I was also exposed to my grandmother’s crochet work that covered our furniture and was used as tapestry and table cloths. This must have unconsciously inspired me to create works with fabric and woven material from an early age. The tradition was continued by my mother who does tatting and knitting and now my wife who is a textile designer. Born and brought up in Delhi, I was surrounded by old-world charm and nostalgia. So much so, that I wanted to give these memories a more permanent manifestation mostly in the form of installations," he adds.

Kaushik’s first solo show was held in 1997 in San Francisco titled Markings on the Wall. The show, consisting of drawings and installations, reflected his experience of being from Rajasthan and having spent almost all his summer vacations in the desert state. The show was replete with a sense of graffiti that one experiences while walking through the Shekhawati district.

Juxtaposing elements of pop art with traditional miniature art, the show was a hit. Kaushik recalls that the initial struggle was one of trying to find a language that smoothly combined the ethos of his Indian roots with that of a western education. Search for identity, issues of immigration and migration have always been subjects that concern him.

In 2014, at Delhi’s Vis-à-vis gallery, he had exhibited a 40-feet-long crochet-based work in steel wire titled Dislocated Roots that narrated a similar story.

He was also one of the first artists among his contemporaries to experiment with mediums when most others were happy focusing on oil and acrylics. “Balancing high art and indigenous craft-techniques, my work is a depiction of the aesthetic and material cracks underlying the visible reality of urban life. They are abstract, neo-expressionist, collages of kaleidoscopic materials and techniques -- wire mesh, paint, sewing, embroidery, tufting, line drawings and organic dyes that bring to the surface histories of tension that exist just beneath the ordinariness of everyday lived humanity. Through my work, I want to capture the spirit of human fragility and the ability to transcend it.”

For instance, in a recent show in Delhi titled Fibre Fables, Kaushik had showcased a mixed media installation titled Roots made out of metal wires woven with wool on the kilim loom. Created in collaboration with weavers from Panipat, the work symbolises our eternal quest to know where we come from and where we stand today. More recently, he has just completed an 80-meter-long wall with recycled waste from the construction site of a real estate company in Alloha, Gujarat. The work may soon find its way as the worlds’ longest recycled installation in Limca Book of Records.

An avid art collector of art and antiquities, Kaushik also doubles up as a textile designer in partnership with his wife Rema Kumar and has been successfully running ‘Add Ons’, a lifestyle and design store in Shahpur Jat, New Delhi.

The store houses saris (“we have been restoring silk fabrics specially Banarasi fabrics”), traditional jewellery, stoles, folk and tribal art. “My wife, a textile designer, and I felt the need to make these more accessible to people, rather than let the folk and tribal arts die a natural death. We have been working with weavers and craftsmen across India, some of them National Awardees, for the last 15 years, creating new products by giving their work a more contemporary, design input. We want Indians to value and respect our traditional crafts instead of spending their money on multinational brands,” he says.

As an artist, Kaushik believes steadfastly in creating awareness about our rich ethnic tradition. “Money is important, but art has to be pursued for the passion one has for creating and changing lifestyles and thought processes,” he says. No wonder then, after he comes back from Gunehar in mid-June, there is no holiday break for him. He is then going to be working on a project called Britindia, a celebration of 70 years of India's freedom from Britain that would involve fashion, theatre, performance, and visual art.