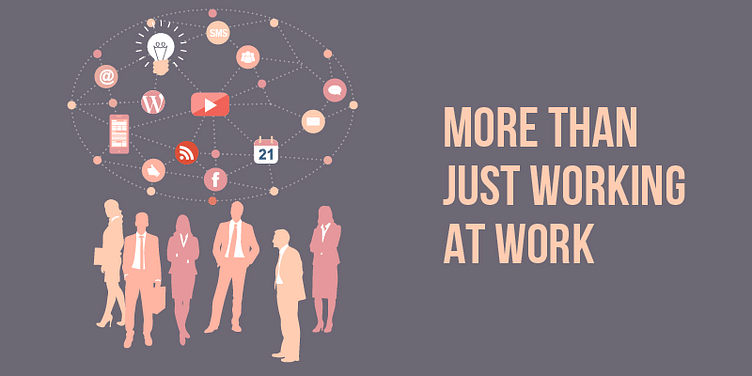 For the most part, the working world prides itself on how hard its work happens to be. Hard work is a beautiful thing. Sometimes even compensates for the lack of talent, cultivates respect and credibility, and creates more space in a day. But if hard work is all that went into success, more than a few of the world’s billionaires would still be stressing over next month’s loan installments. Because while hard work can take you places, a lot of times it’s not even half the battle.

You need to have work relationships

A good performance review is great for you. What potentially carries more weight is the invitation to lunch right afterward from a group of coworkers. When camaraderie is developed, it elevates a multitude of factors, one of which is a best friend at work. As much as the idea of a “best friend” might drip with associations of grade school, it’s been proven that such a dynamic at work is able to amplify productivity by a magnitude of 7 fold.

Having friends at work has the same effect as having friends anywhere else - an increased willingness and eagerness to show up and partake in whatever is going on. More often than not, your typical job role will necessitate teamwork for things to get done. The more hands you’ve shaken and conversations you’ve stricken up, the less you’ll think “Ugh, I have to work with them now?” People are people - multidimensional, flawed, quirky and what not - why wouldn’t you get to know them?

Who would you want?

The allure of a promotion is what gets many an employee out of bed in the morning. How exactly do promotions happen? Yes, having a track record of solid work is a crucial factor in climbing the ladder. That being said, the work alone isn’t what makes you a worthy candidate for that shiny new title or that corner office with the view. What factors in just as much (and often times even more) are the words of your peers, and the general perception you've created for yourself around the company. Think about it - if you were in charge of giving a promotion, which would you choose: The shy guy with impeccable skills who’s glued to his cubicle with nobody to vouch for him, or the social butterfly doing decent work who generates nothing but glowing praise from everyone he comes into contact with?

The difference doesn't even need to be so drastic. If the manager simply hears one more compliment about you than the other guy, that can be the tipping point. Just like the job itself, each of the relationships in and around it only benefit you if they’re continually being improved. It’s easy to make assumptions about the effects of certain actions. However, what might seem trivial can be the impetus for something substantial. Every word counts for something. So even though you don’t talk to Varun that much, tell him to grab a drink with you. Let Apoorva know that you notice the strengths of her presentations when nobody else will. Stop fearing the managing director and congratulate him on his daughter’s wedding.

You will never be able to climb up the professional ladder by yourself. You are always going to need people - then why not build those relationships right from the start?