Bollywood to Boston: How BollyX is making America more fit and confident, one rockstar at a time 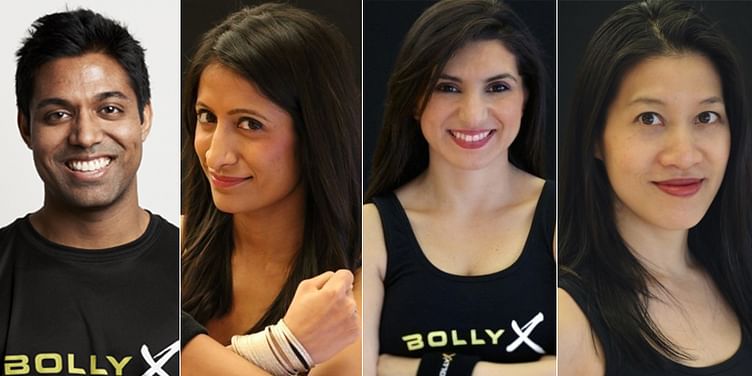 Two days ago, I took my soft, scholarly Chinese roommate to a dance studio near our house in Boston for her first-ever Bollywood experience- a dance fitness class called BollyX® that claims to burn 500-800 calories in an intense 50-minute workout, while empowering you to “unleash your inner rockstar”.

When we emerged 50 minutes later, sweat pouring, hearts thumping, and arms aching, my roommate loudly declared with uncharacteristic spontaneity- “I want watermelon.” I watched as she pranced to a grocery store without inhibition to fulfill her watermelon desires, breaking out into the moves we learned to “Dilliwaali Girlfriend” and “Sheila Ki Jawani”. If her inner rockstar secretly craved watermelon and dangerous dancing across Boston’s busiest street, BollyX fulfilled its promise to unleash it.

In three short years, BollyX has trained more than 1,500 instructors across 30 states in the US and runs regular classes in over 400 locations, with more than 150,000people having experienced one of its classes.

BollyX has recently launched in Canada, and will soon be expanding to Europe, the Asia Pacific region, and South America. The rapid rise of BollyX, which won the Harvard Business School award for the “Most Innovative” new venture of 2015, makes a strong case for courageous entrepreneurs to awaken India’s dormant dance fitness market.

The Rise of BollyX

BollyX was founded in Boston in the summer of 2013 by Shahil Patel, who was pursuing his MBA at MIT Sloan, and Minal Mehta, who had recently graduated from Harvard Business School. The two co-founders met as undergrads at UC Berkeley, where they were both involved with the Bollywood dance team. Shahil ultimately took his own Bollywood dance company, Ishaara, to the semifinals of America’s Got Talent.

When Shahil approached Minal about starting a Bollywood fitness company, Minal says, “It was perfect. It jived with my interests in Bollywood dance and music, as well as sports and fitness.” She left her marketing job in New York, moved to Boston, and spent the summer incubating the idea with Shahil.

They taught wherever they were given an opportunity, and as Minal recalls, “We quickly learned there was a huge appetite for BollyX, and we quickly iterated on our product”. Shahil and Minal met Fen Tung, a Taiwanese-American fitness professional, that summer, and she eventually joined the team as Product Director.

The challenge was to make the BollyX choreography and format easy enough to be accessible to non-dancers, but not so easy that dancers get bored.

Dancers and non-dancers, Indians and non-Indians alike, BollyX has managed to endear itself to thousands of ardent fans, like my roommate, in three ways:

Instead of stopping to teach new movements, instructors signal upcoming moves that you can quickly pick up. The resulting product is 50 minutes of non-stop cardio with high-intensity interval training and muscle-targeted movements.

The majority of the instructors and participants are non-Indian because the BollyX team is intent on making their product appeal to a diverse market. For example, Bollywood choreography is sometimes paired with Western tunes to help non-Indian participants connect the musically unfamiliar to the familiar.

Minal says that their biggest challenge in the early days of BollyX was building awareness around Bollywood in America. “People weren’t sure what Bollywood was. Is it belly dancing? Is it Middle Eastern? Or if it’s Indian- what is it exactly?”

She feels that despite the foreignness of Bollywood, BollyX has gained wide appeal because the underlying brand message to “unleash your inner rockstar” resonates across all boundaries.

A person from any background can still appreciate digging deep within yourself and letting go of your inhibitions to express your inner self. It’s a very powerful message that people can share with their communities.

The branding around “unleashing your inner rockstar” is incredibly consistent and strong- from how the instructors encourage students to pose at the end of songs, to the bold choreography and the structure of the class. The class ends with the high-energy instructors teaching a short performance segment, splitting the class in half, and having half the class perform while the other half roots them on and claps.

Dalia Debs, a Lebanese-American and one of the most popular BollyX instructors in Boston, says that it was this emphasis on releasing yourself from social inhibition that drew her to BollyX. She always loved to dance, yet for a long time was plagued by debilitating stage fright. She says,

I could only dance if other people were dancing, if no one was looking at me, or if I was absolutely drunk.

Today, when Dalia teaches, she spreads her infectious warmth and energy to her class, encouraging each person to dance freely, without fear of judgement. “It humbles me,” Dalia says, “because I remember how underconfident I once was.”

Minal affirms that confidence-building is one of BollyX’s main benefits to participants. “If you are looking to make a real impact on people’s lives, you have to strike beyond appearances and insecurities,” Minal says. “We can have you burn a certain number of calories, but a programme is much more powerful if we can do something even better for you- grow your inner self-confidence.”

Her advice to dance fitness startups looking to build a brand on a small budget is to create an inspiring, skilled team. “If you build a strong sense of community, if people believe in the community, then they will want to preserve the community and the underlying brand. They will become spokespersons for the brand themselves.” For BollyX, that community is built through Regional Trainers, like Dalia and Fen, who train new instructors and carefully disseminate BollyX’s core message around releasing inhibitions, and being bold.

Even as a Co-Founder and President of BollyX, Minal continues to engage in the community by teaching classes twice a week in New York.

Continuing to teach has taught me that when you are immersed with the product, able to experience the joy of the community, and connect with other instructors- that’s where innovation can really happen.

"BollyX's business model revolves around empowering instructors with the training and resources they need to teach the best BollyX classes they can,” Minal says. BollyX, which is privately angel funded, derives revenue from three sources:

BollyX differentiates itself from other dance fitness programmes such as Zumba with its focus on Bollywood, the standardisation of quality by requiring instructors to use BollyX choreography, and the focus on cueing dance moves to ensure students can enjoy a smooth class. Competitors in the Bollywood dance fitness space include Bombay Jam and Doonya, but both are still heavily concentrated in their respective geographies, California and New York, while BollyX has expanded to 30 states in the US, and recently to Canada.

The Indian fitness industry is projected to grow 20 percent year on year, and as the third most obese country in the world, India has a lot of calorie burning to do. India’s rich traditions in dance and music, paired with its huge dance-loving population, make dance fitness a strategic way for startups to take a big bite out of India’s rapidly expanding fitness pie.

While the prevalence of Zumba, kickboxing, Pilates, and other group exercise classes has grown with India’s fitness craze, no homegrown group fitness brand has successfully targeted the unique tastes of Indian consumers. Women are a particularly underserved market in India’s fitness industry. BollyX’s mission to boost self-confidence through a fun, quick workout, and non-judgmental community, resonates with the changing needs of the modern Indian woman.

Minal says BollyX hopes to expand to India soon, “It would be an honour to bring our programme, inspired by the Bollywood film industry, to the land of Bollywood, and to our motherland.” Until then, BollyX’s story allows us to imagine a future where India’s diverse dance heritage meets the rigours of modern fitness, and creative entrepreneurs.