Inspired by Sonam Wangchuk, this Australian college dropout is changing lives in the Himalayas 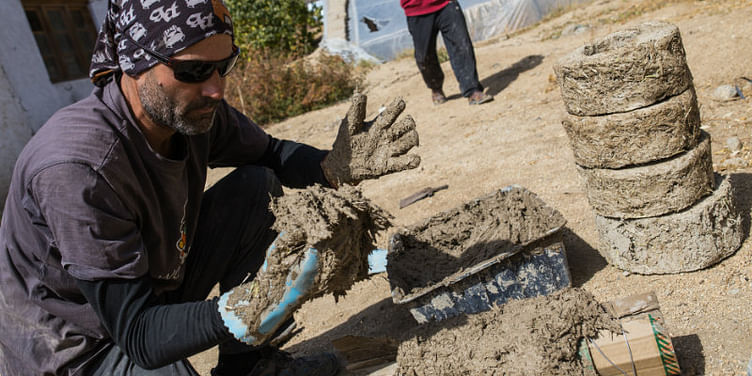 Russell Collins first heard about the rocket stove when he met Sonam Wangchuk, an engineer widely known for bringing education reform in Ladakh. The concept of rocket stove pushed Russell to do some digging in his spare time.

The interest later became an obsession and Russell ended up building a prototype of rocket stove in Manali two years ago. Although it did not work, he did not back down on the dream of building a working design while in Australia and tasted success in early 2016, when he built a working prototype, naming it Himalayan Rocket Stove.

“I then proceeded to think about how to bring it to India and the Himalayas, as that has always been my inspiration for this stove, having witnessed the massive demand on forests that was (and is) unsustainable,”

says Russell, who dropped out of college at the age of 19 to join an eco-rock musical theatre production and ended up travelling around Australia.

The Himalayan Rocket Stove currently has two versions- the smaller ’Standard Rocket Stove' and the slightly larger 'Water Box Rocket Stove'. Every stove offers room heating and cooking surface, while the ‘Water Box” version integrates a hot water system. Phone charging and lighting is a new feature that will be incorporated soon as an optional add on. The stove maximises the energy efficiency rate up to 85–90 percent as opposed to a typical wood-burning box, which would clock 20-25 percent on the efficiency front.

How he landed in India

But what lured Russell, an Australian, to spend so many years in the Himalayas?

Russell, 46 now, first travelled to India to visit Kinnaur and Spiti Valley when he was but 22. His experience with the village community compelled him to return to these regions multiple times, eventually becoming involved in various non-profit programmes in Tabo, a small town in the Lahaul and Spiti district on the banks of the Spiti river in Himachal Pradesh.

He then self-funded an eco-house development programme in the village and simultaneously started organising sponsorship for Serkong School in 2003 to provide quality education to the children of Spiti.

In 2003 Russell travelled to Ladakh with a French architect on a study tour. He got to visit SECMOL (Students' Educational and Cultural Movement of Ladakh) and Druk Pema Karpo. What intrigued Russell was the fact that both schools are focussed on ecological development. Since then he has been organising eco-educational tours every year at the Serkong School in Tabo with the participation of teachers, staff, and children.

“A few years ago I crowdfunded a solar water pump for the school and had it installed. This has also been successful project, as water is a significant issue for the whole region,” explains Russell, who worked in the community mental health field for a decade before making India his second home.

The regular tours in the Himalayas led him to establish a travel company Yak Trak in 2003 and guiding tours in Himachal Pradesh and Ladakh.

While he self-funded the early stage of prototyping his rocket stove, money came in from someone he had met in Kinnaur Valley in 2003 whilst being stuck in a landslide. They had stayed in touch long after.

The person's family had a charitable trust in the US which supports projects for social causes and Russell got funding for his rocket stove project. He utilised the money to set up a small production unit in Ladakh and Chandigarh for deep testing and design development.

On how he gathered knowledge to build the rocket stoves, Russell states, “I watched a lot of YouTube videos and read up on rocket stoves, as there are a lot of passionate people around the world who are working with this technology. It’s an open source movement sharing their experiments and research with each other. I benefited enormously from the pioneers who freely shared their ideas.”

He was on a continuous search to find out how to miniaturise the concept to fit it into a metal box that resembled somewhat the size and shape of a typical Himachali tandoor (or bukhari). It took many prototypes to find a way to bring the height down using innovative designs and air flow tweaks.

The next step was to make a stove that serves multiple purposes — heating a room, providing a suitable cooking surface, and temperatures, heating water and charging a phone from a USB port powered by current generated by the tech built into the stove.

After setting up the production facility in Ladakh, getting the perlite was a challenge leading Russell to develop insulating clay tubes using local alternatives. Meanwhile, he still had enough funds from the seed grant to partner with a manufacturing unit in Chandigarh.

In Ladakh, where people use both wood and animal dung as fuel, there are many willow trees with thin stick-like branches that fall each year. This wood proved to be perfect for the rocket stove.

The Himalayan Rocket Stove is currently in the pilot phase and given to disadvantaged families, poor nunneries, small village schools and old people’s homes at this stage. The feedback will help to improve the design.

Russell is in the process of setting up a private limited company in Chandigarh with initial production to start from a factory based in Baddi, an industrial town just across the border, in Himachal Pradesh. Russell and his production manager are the only permanent employees, while the manufacturing partners have approximately 100 employees.

The stove will be sold at around Rs 15,000 for the smaller unit and Rs 20,000 for the unit equipped with the hot water box. The large space heater they are working on will be priced around Rs 30,000. According to Russell, the product will be ready for sale this September.