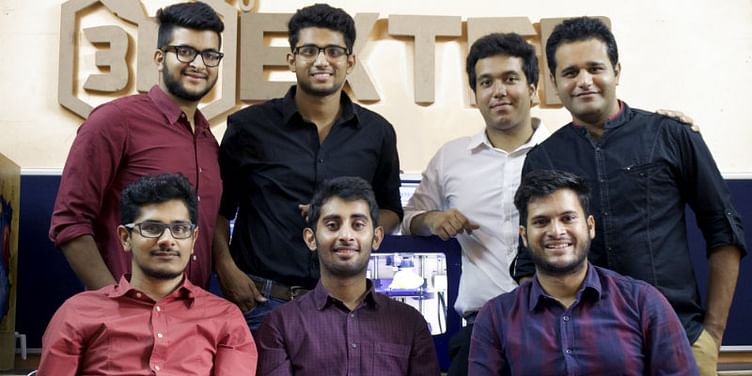 The 14th episode of the American sitcom's sixth season - The Cooper/Kripke Inversion - featured some interesting machines, one of them a 3D printer, and that left a lasting imprint on the minds of the group.

The idea of starting a business together was already in their minds, and the episode prompted them to research the 3D printing market. They observed that demand for 3D printing was increasing in the country.

At first, they tried to introduce 3D printing technology in the fashion and automobile sectors. But they found that there were players that were already serving the two sectors.

They then turned their attention towards the education sector and observed that it was hamstrung by the lack of proper systems to provide experiential learning in schools.

The seven friends tried fitting their idea into the still untouched space and studied where this technology could be pushed.

A new way of learning

In June 2015, the team of seven launched 3Dexter, an edutech startup that provides experiential learning processes to students between the third and eighth grades through 3D printing technology. It has designed a 3D printing curriculum for schools in sync with the CBSE, IB and ICSE boards.

3Dexter imparts 3D printing and designing skills with proper classroom integration of the various subjects being taught to students.

“The use of 3D printing technology in schools creates an environment of experiential learning, much more effective than earlier learning methods when diagrams were made on paper. With 3D printing technology, instead of learning the function of human organs through pictures described on paper, students can create replicas of those pictures. This helps them understand subjects in a better way. Our vision is to cater to innovation at its core and start mini factories in schools, where students visualise, design and create,” says Raunak Singhi, Co-founder of 3Dexter.

He adds that they offer an annual package to the schools, which consists of 3D printers, 3D pens, material, trainers/teachers and the curriculum.

From launch to execution

According to Raunak, it’s been more than one and a half years since the launch, and it wasn’t an easy journey.

“We faced a challenge in spreading awareness about the need for such technology in schools. We aimed to offer an end-to-end solution to schools, unlike others. For that, we built curricula in accordance with various boards. It took us six months before we launched the pilot project in a school in Dwarka,” says Raunak.

Also Read: How Fliplearn plans to flip the way students study in India

The pilot project ran for three months and catered to around 500 kids. Since April 2016, 3Dexter has been running full-fledged operations.

Raunak says the project is currently operational in 14 schools in the Delhi-NCR region, Gujarat and Bihar. The startup charges schools an annual fee of Rs 10 lakh, and in return, offers them three printers, two trainers, 3D pens and 50 kg of raw material for the printer, which includes polylactic acid.

For better efficiency, the startup provides an online portal for students, where they can access video lectures, research objectives and other curriculum-related information. Its aim is to take this technology across all schools in India and make it easier for students to learn.

Last year, the Niti Aayog announced the launch of the Atal Tinkering Labs (ATL) programme. The programme will offer a workspace where young minds can give shape to their ideas through a hands-on, do-it-yourself method, and learn innovation skills. The programme would contain educational and learning "do it yourself" kits and equipment on science, electronics, robotics, open source microcontroller boards, sensors and 3D printers and computers.

Under this programme, a total of 500 ATLs would be set up across the country in schools, with a minimum of 25 percent of the laboratories set up in schools managed by the government.

It will also provide grant-in-aid that includes a one-time establishment cost of Rs 10 lakh and operational expenses of Rs 10 lakh for a maximum period of five years to each tinkering lab.

“The government programme of setting up tinkering labs in schools has given a boost to our business. Riding on the growing opportunity, our target is to achieve 100 schools by the end of this academic year,” says Raunak.

A report released by RedSeer Consulting in 2016 stated that the market size of the online supplemental education opportunity in India was expected to touch $2.5 billion by the year-end, and was poised to grow at 15 percent over the next three years.

In this market, a large number of players are catering to the considerable demand for online education.

Byju’s, Topper Learning, Simplilearn, and Prepathon are some of the dominant names in the edutech space, and each of these players has raised large sums in funding over the past few years.

In 2016, investors’ interest in the edutech segment was considerable. Last year, around 58 education startups collectively raised investments of over $210 million. The top five among them were Byju’s ($125 million), EduPristine ($10 million), Avanti Learning ($5 million), CueMath ($40 million), and Simplilearn ($30 million).

According to experts, the edutech segment is evolving and will be a driving force in bringing about a change in India's education system.