Where does your car finally end up? 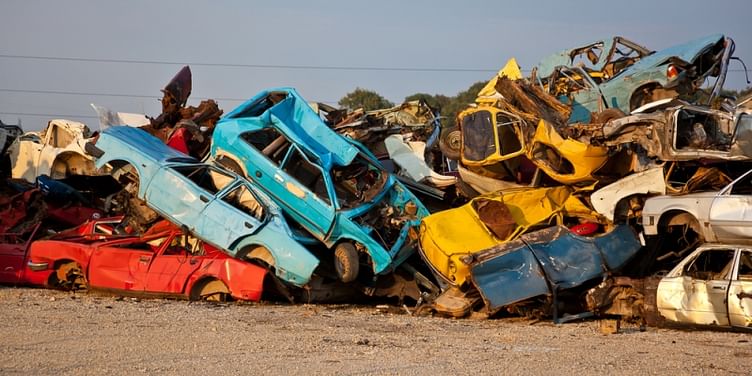 A big pile of vehicles gathering dust and rust is rising, but India is yet to come up with non-polluting ways to deal with them.

Underneath rattling metro pillars and fast engulfing urban fabrics, there are large places in Delhi that specialise in breaking down metal and steel rather than building it up. Mayapuri in West Delhi is one such area. It is one of the biggest centres of the unorganised end-of-life vehicle (ELV) industry in the country. Amongst vehicle carcasses, piles of rubble, leaking exhaust pipes and spare parts, men work all year round dismantling vehicles that are no longer in use- either because they are no longer fit to operate or because they have become too expensive to operate. Children run barefoot rolling over-worn tyres. The air, concentrated with noxious fumes, is putrid and overpowering.

Around seven kilometres from Mayapuri, A.V. Ramesh, an ENT specialist, sold his 13-year-old Maruti Omni in 2009 to a mechanic. Ask him if he had ever heard of ELV, and he simply says, “The van had been used for so many years that after a point, we weren’t sure if it would start. A nearby mechanic offered to fix it and use it as a school bus, so we sold it. I recently saw it lying in a garage nearby. We no longer care what he does with it.”

In the Indian context, the automobile industry is only 25 years old. But post the entry of foreign direct investment and liberalisation in 1991, the market for vehicles of all types has seen a colossal growth. With the annual domestic sales of 17.7 million, 18.4 million and 19.9 million cars in the three consecutive years 2012-2015, the overall amount of registered vehicles adds up to over 200 million in 2015.

Around 2.2 crore vehicles are estimated to reach their end of life by year 2025 against 87 lakh at present. Around 80 percent of those vehicles are expected to be two-wheelers. In India, ELVs are almost entirely processed in the informal sector, with little to no inputs from the formal sector. Most businesses are family owned and knowledge is passed down the generations. Despite being known for one of the highest rates of recycling in the world, jobs in the informal sector are normally precarious and insecure; they thrive in hazardous or unhealthy environments, and they cannot rely on formal health assistance or safety nets.

This makes informal sector workers systematically more vulnerable to environmental and health challenges. In a study conducted by the Central Pollution Control Board, 62 percent of respondents reported that the cuts and bruises happen on daily basis. Around 24 percent agreed that they suffer from skin diseases because they are in constant touch with chemical substances. A quarter of the respondents suffered from skin diseases and 10 percent reported breathing difficulties linked to inhaling chemical fumes.

Apart from the vulnerability of workers to health issues and diseases, each ELV is dismantled into thousands, even tens of thousands of different individual parts, each with its own distinctive market and environmental burden. Toxic liquid wastes like engine oil and battery water are dispersed in the environment. Draining of battery acid and release of AC-gas results in soil and water contamination over time. Solid wastes like air filters contain foams made up of polyurethene which releases potentially hazardous dioxins when burned.

With specific focus on policies regarding vehicular pollution in India, the Ministry of Environment, Forests and Climate Change recently released guidelines for environmentally sound management of the ELVs. Recommendations include constitution of a multi-stakeholder advisory group that informs policy processes in the sector, quantification of ELVs on a regional as well as national basis, infrastructure development by the private sector or through a public-private partnership mode, capacity building ventures among stakeholders and inter-ministry collaboration to achieve the aim of 100-percent takeback of ELVs. It suggests capitalising on the strengths of the industry like employment creation in the sector and adding value to secondary materials through recycling and reuse.

A strong lobby also exists for the draft policy on ELVs by the Ministry of Road transport and highways this year. Speculations are rife that the draft policy may offer rebates and cuts on excise duty on a new car for those de-registering an old one. These proposals come close on heels of government announcing a decision to implement stricter emission norms for vehicles from April 2020 despite the auto industry calling it an "extremely challenging" task to move up to BS-VI fuel specifications, skipping BS-V norms altogether.

In a fine example of public-private partnership, the automobile industry and Ministry of Heavy Industry have set up an automobile dismantling demonstration centre at the Global Auto Research Centre in Oragadum near Chennai. The centre can dismantle automobiles in a hygienic fashion with minimum impact on the environment. It will also develop systems for dismantling two-wheelers and try to use manual labour to the maximum extent. The centre will also attempt to train existing operators, and motivate them to upgrade their units.

“End of life vehicles need regulation, not only to curb environmentally unsound recycling practices, but to also ensure that resources are brought back to use. Though EPR will be an ideal tool to manage this, it is important that the lessons learnt from e-waste rules implementation are applied,” says Priti Mahesh, Chief Programme Coordinator at Toxics Link, a group working for removal of toxics from the environment.

The draft policy and promised budget allocations on ELV policy has shown a new light to the underbelly of the automotive industry. A definitive, comprehensive draft taking into considerations the subjectivity of Indian conditions of growth and development is the way forward.

Disclaimer: This article, authored by Shruti Appalla, was first published in GOI Monitor.