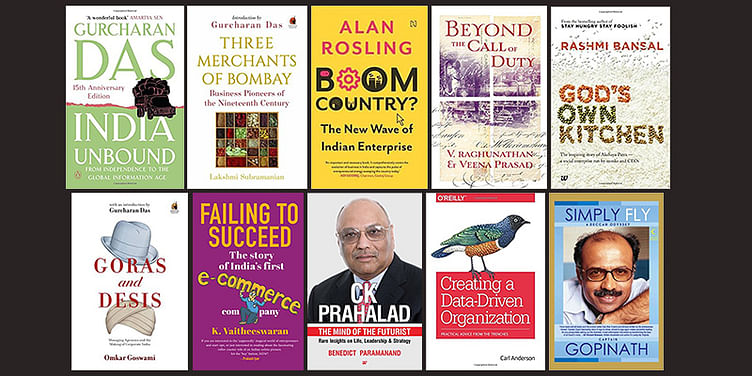 The third annual Bangalore Business Literature Festival (BBLF) will be held at Century Club in Bengaluru on September 9, and features a range of insights on business biographies, founder narratives, entrepreneurship and organisational development.

“Biographies and autobiographies have always been the number one source of insights and learning for entrepreneurs and executives. The number of books — both print and digital — sold in recent years is testimony to this,” says festival curator Benedict Paramanand, publisher of the magazines ManagementNext and SustainabilityNext, and author of CK Prahalad – Mind of the Futurist.

The BBLF theme this year is ‘Biographies and Business History.’ The basic purpose of the festival is to facilitate engaging and stimulating conversations between authors and readers, and to bring the eco-system of publishing to a single platform, according to Benedict. See my write-ups on the earlier editions of the festival in 2016 (grassroots entrepreneurship, startup ecosystems) and 2015 (business models, startup boom, and storytelling).

Despite a lot of noise and hype about startups in the media, increasing coverage is a good sign. “The media are in business themselves so for them, very often, a good story matters more than a deep discussion of issues. So I think the media will be noisy and often sensational,” observes Alan Rosling, author of Boom Country: The New Wave of Indian Enterprise.

“The way startup stories are presented in the media, it is as if one has just to start a new venture before one can start attracting investors ready to invest their millions,” cautions V. Raghunathan, Director, Schulich School of Business (India Campus) and CEO, GMR Varalakshmi Foundation.

. “Stories of blood and sweat, the inherent risks, the stories of failures, data and statistics on the success probability or failure ratios, sensible guidance for young entrepreneurs — such serious issues are conspicuous by their absence. Optimism is fine, but it should hardly be at the cost of realism,” he explains.

When it comes to book publishing, India's business writers seem to be meeting the needs of the business community more accurately these days. “The quality and relevance of Indian writers in the last five years has improved by leaps. This is because more successful professionals, not just consultants or professors, have taken to writing seriously,” observes Benedict.

He cites as examples Subroto Bagchi, Gurcharan Das, R Gopalakrishnan, Devdutt Pattnaik, and Jagdish Sheth. “These writers are exemplary leaders who not only write very well — they are able to relate and capture the Indian context with sensitivity. They help Indian executives and entrepreneurs to not get bogged down by Indian constraints but to embrace them and override them,” Benedict explains.

Many of these speakers are featured in the BBLF series of events. “The time has come where business leaders and entrepreneurs don't have to only depend on Western books for knowledge, inspiration and insights. A good array of Indian writers today form at least 40% of their bookshelves,” observes Benedict.

Businesses in India face more constraints than in other countries in terms of poor infrastructure, expensive real estate, and complex and uncertain regulation. “The biggest difference between the Indian entrepreneurial ecosystem and those in other startup hotspots across the world are the poorly developed linkages between research-intensive universities and the business scene,” says Alan.

“In general, Indian startups — like much of Indian business — are less focused on innovation than one might expect, and one of the reasons for this is that the science base is typically not yet fully part of the ecosystem,” observes Alan. In comparison, China is ahead of India in the funding of tech startups and in China there is far more scientific insight spinning out of the universities into the world of small business.

Demonetisation and GST have caused other major shifts in India. “Any fundamental reforms brings with it a phase of uncertainty. Adapting to demonetisation and GST are major challenges today. It will take at least one year to adjust to the new environment. There could be slow growth and noticeable revenue loss for many businesses,” cautions Benedict of ManagementNext magazine.

Despite the current startup boom, access to funding and credit is a major problem for small companies since banks have become more risk-averse. “The VCs and angel investors in India still have herd mentality. Many Indian companies are therefore going abroad to raise funds,” observes Benedict.

Peer-to-peer lending should take off in a big way for the eco-system to flourish. “Micro-lending is key to spur small businesses, but stiff and over-zealous regulations are a damper,” says Benedict. The outlook varies across sectors as well.

“Education and health have massive growth potential — but again over-zealousness to regulate fees, hospital rates and medicines have the potential to derail these sectors. They only need superior regulatory environment, not excessive control. This bring back memories of socialist India of the 1970s,” Benedict regrets to observe.

“Agriculture is in a shambles. Without bold reforms and focus on nurturing farm-entrepreneurs, India will lag behind in productivity and joblessness,” he adds. A key concern in India today is jobless growth. Rapid skills development is only one of the solutions, cautions Benedict.

A good feature of business literature festivals and panels is the wealth of insights they offer for aspiring entrepreneurs. See for example my pick of highlights from the earlier Bangalore LitFest (‘If you make good samosas, your stall will do well’) and Times LitFest (‘Technology democratises entrepreneurship’, ‘From Infosys to Snapdeal: 25 years of startup wisdom’).

“I think aspiring entrepreneurs know when the time is right for them to try a business of their own. Young people in particular can now venture for themselves in the confidence that, if things don't work out well for them, there will be many future opportunities in India's growing economy,” observes Alan.

“So I would advise aspiring entrepreneurs to gain experience working for others, form a strong team with compatible people who complement each other, think through their business ideas in detail, but ultimately to take the plunge once they feel the moment has come,” sums up Alan.

More insights will be discussed at BBLF 2017 on September 9 in Century Club by speakers such as Gurcharan Das, Rashmi Bansal, Vaitheeswaran K, Lakshmi Subramanian, Ramya Ranganathan, and Joydeep Sen Sharma.