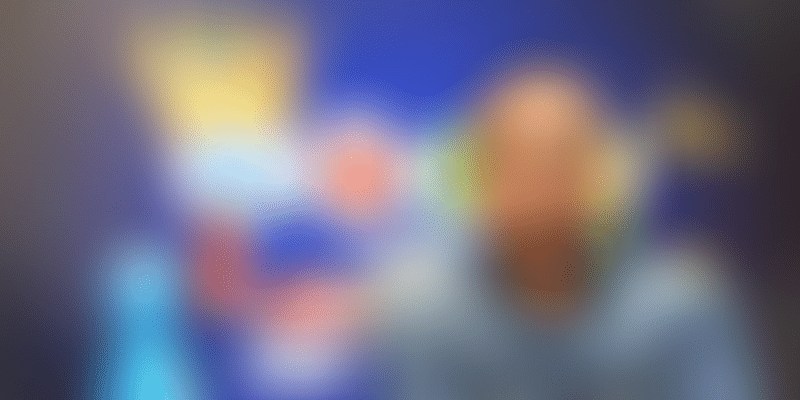 A Mario game fan as a child, Vikash Jaiswal, Founder of Mumbai-based Gametion is the brains behind the sleeper hit board game app, Ludo King - the top ranked free game on Google Play Store with over 10 million installs.

When Vikash Jaiswal was a little boy growing up in Patna in the 1980s he used to constantly play the popular Nintendo Mario games. Little did he know then that just a few decades later, a game that he created would be a chart topper. But that is what happened when he developed Ludo King and released it in December 2016 on the Google Play Store. It is today the top ranked free game with over 10 million installs on the Play Store in India and has been on top for months.

Vikash’s small Mumbai-based game development venture, Gametion, founded in 2008 is the developer of the game. Gametion is the publisher of the game on the Apple App Store, but the company got into a licence agreement with Gamotronix to release Ludo King on Google Play Store.

The roles that serendipity and luck play in a startup’s journey is clearly visible in Vikash’s and Gametion’s story. Vikash, who lost his father when he was just two, did his schooling in Patna and then his BE from MIT Bulandshahr.

I was interested in video games as a child, and crazy about Mario games. I even did a graphic designing course. But I felt there was no scope in graphic design, so I did my bachelors in computer science engineering,” says Vikash, a soft-spoken father of two.

However, he could not let go of his love for video games and in 2004, upon graduating, Vikash moved to Mumbai to join Indiagames, where he worked as tech lead.

But the call of entrepreneurship was too strong to resist and in 2008 Vikash set up Gametion to develop desktop or browser games. He launched a few puzzle, racing and action games. The site peaked in 2013 when almost 20 million users visited it on a monthly basis.

However, the numbers started dropping. By then it was clear that mobile was the future of gaming with Angry Birds and Candy Crush becoming super hits thanks to the smartphone.

So in 2013-14 Gametion started making mobile versions of its more successful browser games, like Baby’s Big Adventure, in which a baby has to be guided through a maze to reach his milk bottle. “We started mobile gaming quite late. We should have started at least two years before we actually went forward with it,” says Vikash.

He was quite content to muddle along, developing, and launching over 10 games that he thought would be interesting for users but nothing really clicked. In October 2015 he came across a Snakes and Ladders game app. He found it interesting, especially the fact that you could see the token in the game jump. He thought of Ludo, a board game he had played occasionally in his childhood. He found a few Ludo game apps, but found none interesting. “I pitched the idea to my designer and programmer, but they were not interested. I tried to convince them saying it would become one of the Top Five games in the board games category. But I never thought it would reach number one,” says Vikash, who celebrated his 40th birthday earlier this month.

The team, which was then under 10 people, started working on another game. A few months later Vikash revived the Ludo idea.

While his lean and mean team of two - a programmer and a designer - were now ready to give this idea a shot, there was a challenge. The programmer, Santosh Patil, had never played Ludo. So the trio began researching the game on Google. They found that there were different versions of the game, with very different rules. Some rules, they realised would not translate well as a mobile game. For instance in Ludo if a player rolls a six, he can throw the dice again and multiple sixes mean various other rules kick in place. This would slow down the game and make the user bored. Hence they scrapped such rules and decided on a simpler version of the game in the hope that users would stay more engaged.

Finally, over a year after the idea first struck Vikash the game was released in December 2016. He never expected the game to be a hit. It was about two months after the game’s release that Vikash saw something odd happening. He realised that the statistics on the Google Play Store dashboard and on Google Analytics did not match.

Google Analytics was showing a few lakh more users than on the Play Store analytics. That’s when we realised that players were transferring the game from mobile to mobile through file sharing applications. Then we started getting messages and calls from people asking for cheat codes, some complained that instead of studying their children were playing Ludo King. That’s when we realised that the game was a hit,” says Vikash.

Just take a look at the numbers:

The reach is impressive when we consider the fact that Temple Run 2’s reach in India was about 4.38 percent in July compared to Ludo King's 7.51 percent, according to market and competitive intelligence firm KalaGato. Reach is the percentage of smartphones on which the app is installed.

Thousands of games are released on the Google Play Store and App Store in any given month. Few of these games go on to become successful; even fewer stay on top for months.

This Time magazine article of 2013, published a year after Candy Crush’s launch and insane success, lists a few reasons why the game was loved by many millions of users world over.

Most important is the game’s ability to make players wait and come back for more.

One of the points highlighted is the social aspect – games that allow gamers to play with friends online are successful.

Earlier this month, a day after Vikash’s 40th birthday, Gametion simplified the Facebook link. The fourth mode now facilitates play with Facebook friends, and up to six players can play a game.

Another reason for its success, says Vikash, is the low visibility of ads in the game. While most of the revenue for the company is ad-driven, along with in-app purchases, the ads are not shown during a game, but only after a game is over. “We don’t want users to get frustrated because of ads. They get a clean experience,” says Vikash, who declined to share revenue details of the company. However, a few users are upset with the video ads that are now part of the game after a recent update, if user reviews on the Play Store are to be believed. This is something the company will have to fix soon.

The offline modes have helped increase its reach. The game has been installed even in locations like Lakshadweep and many parts of Northeast India, and in countries like Indonesia and Afghanistan. In fact, the Play Store in Afghanistan did not showcase Ludo King as in-app purchases are not supported in that country. But numerous requests led Vikash to release a version on the website that users in Afghanistan could download.

Ludo King’s success has seen Gametion’s team size double from 10. Ludo King was released without any tester on the team; now the game has three testers. The company was also run as a sole proprietorship and is being converted to a private limited company.

Vikash, who claims to have done no marketing for the game, says he intends to launch an Android TV version of the game and release it on Windows Store and Samsung App Store. More games are also in the pipeline.

India ranks fifth in the world in terms of mobile game downloads on iOS App Store and Google Play Store according to mobile apps analytics firm App Annie. Revenues from mobile gaming in India was at around $265 million in 2016 according to a CII-TechSci Research report and is forecast to cross $280 million this year. The market for Ludo King and for Gametion is clearly large.

However, the challenge is to cling on to this success. Repeating success has been a challenge for most gaming companies. Zynga has never been able to match the success of its fiercely popular Farmville game. Similarly King, the Stockholm-based company behind Candy Crush, has not been able to create another blockbuster.

“One should have good knowledge of gaming, and be a gamer at heart. But even then there is no formula for success. I will only say this - idea is money,” says Vikash. He is hoping that he comes up with more money spinners soon.