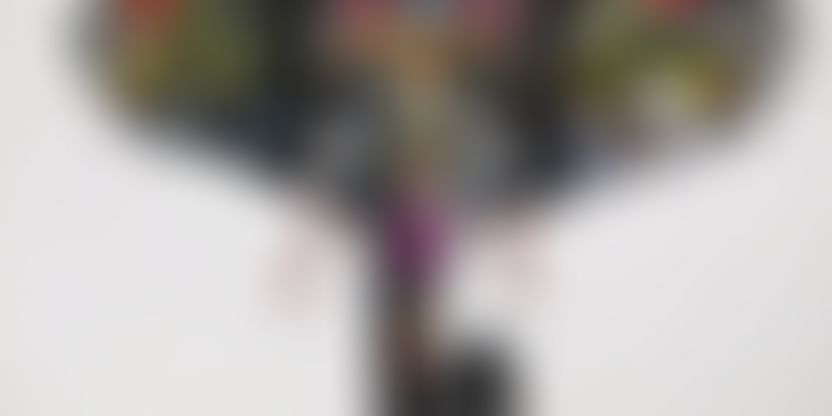 PhotoSparks is a weekly feature from YourStory, with photographs that celebrate the spirit of creativity and innovation. In this pictorial essay, we feature some of the diverse works of artist Christina Banerjee on display at Sublime Galleria in UB City, Bengaluru.

Christina Banerjee is an American artist currently based in Delhi. Married to a Bengali doctor, she grew up in Alabama in a family steeped in art – her father is a wood-worker and her mother is an artist. In her early years, she had studied the works of Indian artists like Anish Kapoor.

Christina moved to India four years ago, and started work on art in 2015 after immersing herself in her Indian surroundings for a couple of years. She does about three or four paintings and two to three sculptures a month, she said in a chat with YourStory.

Her current exhibition is titled ‘Adaptation’ and focuses on animals adapting to life in Indian cities. Domestication comes along with challenges of crowded habitats and pollution, and the co-existence is coming under strain with population pressure.

Her work extends beyond depiction of animals; she also has developed her own unique personal style with a mix of east and west. “I use elements from Frida Kahlo’s style but have added my own touch in terms of themes, combinations and materials. These are instinctively mine, and represent more than just paintings of animals,” she explains.

Her technique involves guache (an opaque watercolour) as well as clay and wax. “I also use recycled materials such as old locks, keys, and bolts from construction sites,” she explains. Christina used to teach when she first moved to India, but now focuses only on creating art. Her next exhibition will be titled ‘Evolution,’ and features new themes though connected and related to the current works.

“Art is my whole life, I am consumed by it. I am inspired by India’s cities, colours and cultures,” Christina says. There are so many different artistic styles in India. “India is a great hub for fusion between its styles and with Western art. Fusion is happening in food also,” she observes.

Her message to the audience is to appreciate and help animals as well as reduce environmental waste. “Don’t dump into landfills. Create beauty from trash,” she sums up.

Now what have you done to creatively reflect on your relationship with nature around you?