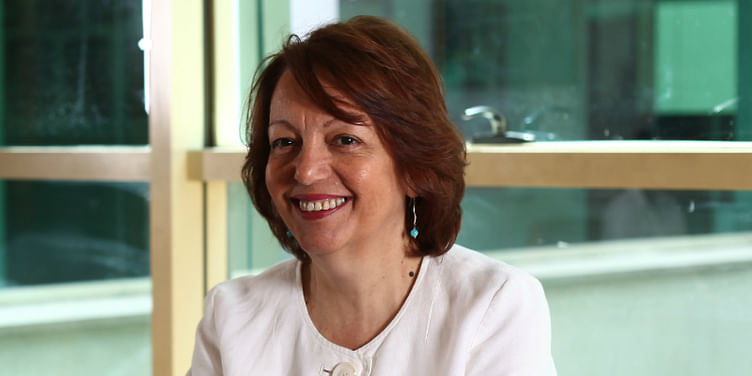 Prema Sagar looks back upon the moment over 25 years ago, sitting across from Priya Paul, the Chairperson of Apeejay Surrendra Park Hotels, at the Park Hotel at New Delhi's Connaught Place, when she stumbled upon the power and reach of Public Relations.

Marrying mere visibility to mainstream publicity, she discovered the formula that would increase The Park Hotel’s occupancy from just three percent to 75 percent – thereby proving the strength of public relations as a modern tool of advertising and communication.

Straight talk from Prema Sagar, the founder of Genesis and the Vice Chairman of Genesis Burson-Marsteller, on “doing PR for the PR industry,” getting acquired by one of the world’s leading PR companies, and everything (that happened) in between.

The Air Force officer’s daughter, now 56, has been feisty and spirited since childhood. “I was always fiercely independent and would have frequent run-ins with my father because of how I’d cycle around, beat boys at hockey, or just listen to my brother strum the guitar,” recounts Prema.

She cracked the merit list at Delhi University’s Shri Ram College of Commerce (SRCC) — one of nine women in the college to have done so - but within a year, she sensed that she was not cut out for college, and dropped out to join a secretarial course at YMCA. Soon after, she joined the law firm Sagar & Co as a receptionist - a stint that introduced her to her would-be husband, Jyoti Sagar. After a series of secretarial jobs, she took a break when her son was born.

For the first time in her career, her mind - which had been governed by fervent impulses until then - was allowed to take a step back, breathe, and plot a meticulous move towards her perpetual goal of being an outlier. This next step - a product of two years of planning - was starting a printing press.

Her brother joined her in the venture. “Our father was furious — we were from a services background, and no one in our family had ever run a business. In spite of that, he loaned us some money to buy the printing press, and in 1981, we set up Genesis Printers,” she recounts.

They also started a City Guide magazine for Delhi (followed by one for Jaipur and another for Agra), for which Prema was the writer, editor, and delivery person, all rolled into one.

The genesis of Genesis

While running the press, one of their clients was The Park Hotels. Priya Paul, the chairperson of the Apeejay Surrendra Park Hotels, happened to mention that they were striving to increase the occupancy of the hotel, but being weary of traditional advertising, they were looking for more inventive ways to do so.

“I was on holiday at Kasauli, reading Mark McCormack's Public Speaking, when I came up with the idea of ‘Going Public at the Park’. The idea was to invite prominent people to speak at the hotel (thus garnering possible media attention) and the people who would come to listen to the speaker would also experience the hotel and its hospitality,” she recalls.

This, in essence, was a textbook public relations and marketing tactic — subliminal, unpaid advertising of your product in a way that it sneaks up on the target consumer. But at the time, this concept was undefined and the term was found only in textbooks as world war case studies, as far as India was concerned.

They executed this idea and it was a sweep. Sensing that she was on to something big, she decided to probe the subject and pursue a specialised course in public relations from the Frank Jefkins Institute of Public Relations in London.

During the programme itself, her course of action became clear - starting her own public relations firm. And so, on November 1, 1992, Genesis PR came into existence.

Fortunately, the growth story of Genesis coincided with the wave of globalisation in the Indian economy, that brought in a slew of international businesses, that were not uninitiated about the potential of public relations.

How she did it

Day one at the office saw three people, and three clients —The Park Hotels, Travel House, and Thai Airways. They subsequently added the India Habitat Centre (IHC) and the launch of the Indo-British Partnership Initiative (IBPI) project to their kitty.

Prema soon realised that their success would not only be the effect but also the causal factor, in the PR wave gaining momentum in India. “It wasn’t enough for us to grow our own business. For sustainable growth, we had to help the industry grow and so we drove the formation of the Public Relations Consultants Association of India (PRCAI) and the Public Affairs Forum of India (PAFI),” she says.

Its offices in Bengaluru, Mumbai, and Kolkata were set up between 1995 and 1997. Around the early 2000s, it had started to become evident that this grand experiment was now going to be a full-fledged industry. In celebration, Genesis started instating more structures and building processes, gearing up for the big time.

In 2002, she installed an advisory board with industry captains, and instituted some iconic initiatives that continue till today - like the annual awards to award achievements within the team, called the “Gabbys,” in existence since April 2003.

In 2004, Genesis launched a management training programme called the Associate Learning Programme (ALP), designed to train an individual in all facets of public relations within a working environment.

“We created proprietary tools for reputation management and a service quality index that helped measure our client servicing capabilities. We became the first PR firm to have computers for every employee and the first to have an intranet,” she states.

Genesis has many incredible achievements to its credit. The launch of Daewoo’s Cielo was an interesting project. It was the first international automobile launch in India, and Daewoo was entering the mid-size car segment in India — at a time when only the Maruti 800, Ambassador, or the Premier Padmini were seen on the roads. “We got eight cars from Korea for the launch and built up the excitement. The launch was a huge success - the target was 60,000 cars, but Daewoo was delighted to find that 123,000 cars had been booked in advance,” she recalls.

Genesis also got its first taste of crisis management when Tapan Mitra of Indalco asked the agency to handle image management during a hostile takeover bid.

“Working with their lawyers and extended teams, we went from editor to editor to make sure the client’s message was received and understood,” she says.

Interesting television shows like Jassi Jaisi Koi Nahin (JJKN), Indian Idol, Bigg Boss, Jhalak Dikhla Jaa also roped in Genesis for their launches. “With JJKN, the idea was to build anticipation about a mystery character. We used interesting tactics, like launching a first day cover stamp with Jassi on it,” she shares.

Today, its network across South Asia includes six wholly-owned offices in key Indian metros, and a strong affiliate footprint in over 200 others - including neighbouring countries Sri Lanka, Bangladesh, Nepal, Bhutan, and Myanmar.

One of the defining moments of its journey was the merger with Burson-Marsteller. Upon establishing great chemistry with one of the clients that Burson-Marsteller’s then India affiliates were handling, the client insisted that Bill Rylance, who was heading BM for APAC, to meet with Genesis. One thing led to another, and Prema found herself having lunch with Harold Burson in New York. “What started as a conversation on 10 percent and 15 percent stake, eventually became an acquisition. For me, it was important to be all in or all out, and not be somewhere in between. In December 2005, we finally signed the papers,” she says.

This merger gave Genesis a considerable boost, as it benefited from an extended family of partners and colleagues across the globe. Prema remains the Principal and Founder of Genesis Burson-Marsteller, besides being the Vice Chair for Burson-Marsteller’s Asia Pacific business, and part of its global leadership team.

They are now a 300-strong team. “Our national and international footprint is well established and scalable. All we need to do is keep to the values that we started with — spirit of entrepreneurship, curiosity, agility, and most importantly, ethics and integrity," she says, signing off.