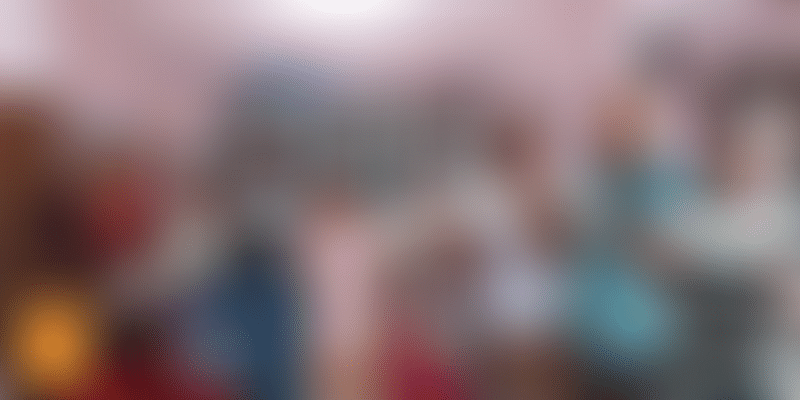 Rag Innovations has built a machine that produces low-cost sanitary napkins to make menstrual hygiene more affordable and accessible for women, and is now selling these machines abroad.

Ever since Padma Shri Arunachalam Muruganantham invented a low-cost sanitary pad making machine two decades ago, a menstrual hygiene revolution seems to be brewing across India. Apart from Muruganantham’s Jayaashree Industries, non-profit organisations such as Aakar Innovations, Goonj NJPC, and EcoFemme have made low-cost sanitary pads and menstrual cups more accessible to women across the country. In fact, most of them have been selling sanitary napkins for as low as Rs 1-2 per piece.

One such startup is Rag Innovations that has built a 5,000-square feet manufacturing setup in the Manepura village in Bhind district of Madhya Pradesh. Here, sanitary napkins are produced in thousands using a unique machine that reduces the cost of production. As a result, women can buy these for just Rs 1.5 per piece.

Moreover, the patent-pending process is gum-free, and the machine is powered by solar energy. Rag Innovations has sold 150 machines in various parts of the country where NGOs, Panchayats, and self-help groups are empowering women with better menstrual hygiene.

The machine can produce 2,000 to 5,000 sanitary pads per day (in eight to 10-hour shifts) and one manufacturing unit takes a minimum of three people to manage it.

Inspired by the Padman

Hailing from Bhind, Anurag understands the challenges women face in this part of the state. Seven years ago, he had visited BAREFOOT – an organisation in Jaipur where he saw a low-cost pad manufacturing machine invented by Muruganantham, popularly known as the Padman.

“I felt like the Padman’s machine was good as a first-level low-cost machine. However, it could be further improved. I began researching on the raw material to simplify the process. We did two important changes. One, we eliminated the need for a pulveriser and the cake-making machine. Two, we came up with a glue formula that worked better than the gum. The machine itself makes it convenient to put in various layers of the napkin, so the end-product is exactly of the same quality and shape as available in the market. But this took months of testing,” he explains.

Rag Innovations’ machine setup involves an air compressor, pneumatic sealing, a compression machine, and a UV steriliser. The pads are made up of non-woven cloth, a net sheet, a wood pulp sheet, a sap sheet, and a back sheet with tape at the back.

“The setting up cost of the machine is Rs 2 lakh, including installation, transportation, and training. Noted sanitary pad companies don’t supply napkins into these villages due to lack of awareness and pricing. In villages, women are compelled to use non-hygienic and homemade pads, which can cause diseases. We decided to bridge this gap by inventing a low-cost machine and supplying pads at the lowest price possible,” shares Co-founder Anurag Bohare (31).

Along with his brother Virag (28), Anurag founded Rag Innovations in 2015, while Virag’s classmate Palak Tiwari (26) joined them a year ago as the third co-founder.

Anurag has worked at a power plant in Gajraula, Uttar Pradesh, and was working as a lab assistant at the National Institute of Technical Teacher Training and Research (NITTTR) in Bhopal before this idea hit him.

The challenge of the cities

Virag says, “We had initially set up our machine in a small unit in Bhopal. But we couldn’t bring down the cost of labour and couldn’t find any investors. So, we had to move our manufacturing unit to Manepura village.”

Palak adds, “Another challenge was that we needed more land to expand our business and the cost of land was just not affordable in Bhopal.”

Setting up a production unit in a village comes with its own share of challenges. “There’s no dearth of talent in villages. However, there’s no mentorship here, and power cuts are frequent. We need to constantly train our labourers, but we are happy that it helps us generate employment in the village,” says Palak.

Eventually, a year ago, the trio set up a small office at B-Nest Incubation Centre in Bhopal for mentorship and networking.

“The women workers now are well aware of the different layers of the pad and are able to produce these pads at the unit independently. They also know how many pads they need each month for the village and produce as per the need,” adds Palak.

Rag Innovations pays these women from the sale of machines, pads, and raw material. In addition to the production unit, the startup runs a non-profit called Rag Charity Foundation, which helps spread awareness about the importance of menstrual hygiene.

“Through our NGO, we sensitise women and the community about maintaining hygiene during that time of the month. We have done this at all the places where we have supplied the machine,” says Anurag.

These pads have now reached 200 villages across India and have impacted 3,000 women in Madhya Pradesh, Chhattisgarh, Tamil Nadu, Manipur, Assam, Odisha, and Sikkim, among others.

Gopesh Bhakta (35), who runs non-profit Arya Health Centre in Kolkata, says, “We definitely could not afford these machines at all, but I felt that just spreading awareness about menstrual hygiene wasn’t enough. We needed to supply these napkins to women in low cost. So, when I learnt about Rag Innovations, I couldn’t believe that the machine could be so affordable. Ever since we installed, we have been able to produce the required number of napkins for the women folk in surrounding villages.”

Rag Innovations has a team of 15 members, including the three founders. “We have managed their salaries from the profit of the machine setup and raw material, which we sell,” Anurag says. The founders claim that the startup has had a growth of 20-25 percent year-on-year since 2015.

Understanding the ‘truth’ about menstruation, Delhi-based TruCup urges women to switch to menst...

Since setting up office at the incubation centre, Rag Innovations has received opportunities to present its business idea before various organisations and companies.

“We have received orders from Adani Enterprise Limited Foundation and National Thermal Power Corporation (NTPC) Foundation under their CSR initiatives. We have installed machines for these companies at Ambikapur, Chhattisgarh and Tanda, Uttar Pradesh,” says Virag.

“We are now trying to contact more corporates to invest under their CSR initiatives. We also need funds to be able to produce more machines and raw material along with spreading awareness,” he adds.

Apart from Indian villages, Rag Innovations has installed machines in Nepal and Bhutan, and has received orders from Sudan, Bangladesh, Pakistan, and a few African countries.

“We cannot invest in marketing at the moment. Most of our machine and raw material orders come through our YouTube channel and Twitter,” says Virag.

“We have also installed machines in the Mahila Ward of the Central Jail in Jalpaiguri, West Bengal and Katni, Madhya Pradesh. We are reaching out to more jail authorities to add sanitary pad production as a part of their vocational training in the premises,” he adds.

According to the National Family Health Survey (2015-16), 52 percent of girls and women in India are forced to follow unhygienic menstrual practices. The Indian sanitary napkin market reached $511.5 million in 2018, and is expected to grow to $992.8 million by 2024 at a CAGR of more than 12 percent during 2019-2024, according to IMARC report.

How these IIT alumni built a decentralised manufacturing unit to help rural women get access to...