Connecting aspirations with skills: How India is preparing its youth today for tomorrow’s careers 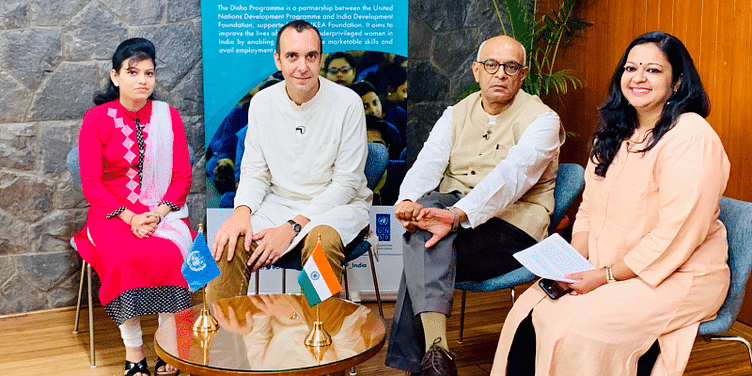 With the recent launch of Kaushal Yuva Samvaad and Let’s Talk Skills Campaign, to mark World Youth Skills Day on July 15, the Government and UNDP aim to initiate an open dialogue with India’s youth and gain their insights on gaps in current skill development programmes and solutions

We all know the truism about teaching a man to fish and equipping him to eat for a lifetime, versus giving him a fish that would suffice for one meal.

The relevance of skilling a future-ready workforce is even more important today, given that by 2020, India is set to have the world’s youngest population.

In fact, in the next 20 years, the labour force in the industrialised world is expected to decline by 4 per cent, while in India it will increase by 32 per cent.

A Government of India skills gap analysis shows that by 2022, the country will need an additional 109 million skilled workers in 24 key sectors of the economy.

These statistics set the context and highlight the urgent need to enhance the existing skills sets of millions of youngsters, to ease their transition from an academic to a professional life, and make them competent and confident to be a part of a global workforce.

Not only is high-quality, market-relevant skill training crucial to make India’s youth more financially independent, it is also the need of the hour to help them adapt to new roles and professions in a world where technologies such as automation and artificial intelligence are becoming more common.

Getting the perspective of youth to match their aspirations

To close this crucial skills gap and equip over 40 crore Indians with market-relevant training and skills by the year 2022, Prime Minister Narendra Modi had launched the Skill India Mission in 2015. Since then, the Mission has been playing a significant role in creating various skilling initiatives in the country, spearheaded by different government departments and stakeholders. Every year, nearly one crore youth are trained under various programmes of the Skill India Mission.

The Mission recently celebrated its fourth anniversary on July 15, to coincide with World Youth Skills Day.

To mark the occasion, the Ministry of Skill Development and Entrepreneurship (MSDE) launched the Kaushal Yuva Samvaad, a programme to facilitate open dialogue with the youth being trained in various skilling centers across India. This one-on-one feedback aims to identify gaps in the current skill development programmes, and use their inputs and recommendations to scale and improve them to align them with current demands.

Speaking on the occasion, Dr Pandey said, “Over the last five years, the Government has been able to successfully create the foundation for skill development in the country. We have more than one crore youth joining the mission annually. It is equally imperative for us to understand the perspective of our youth, who are our biggest target group. Kaushal Yuva Samvaad will be the platform to discuss potential issues and solutions from the candidates' perspective and will give us the perspective to match aspirations of the youth with the offerings of Skill India.”

Commenting on the decision to launch the Kaushal Yuva Samvaad, Dr KP Krishnan, Secretary, MSDE, said, “The youth of this country is the most important resource. By engaging with them, we are able to meet their aspirations as well as meet the demand of the market. It is through this engagement that we can gauge the perspective of the youth. This gives us an opportunity to create a feedback mechanism that feeds into the entire process of improving the overall ecosystem, that in turn, benefits the youth looking for satisfactory employment and the industry looking for skilled youth.”

Among the youngsters who shared their views were Ranjan Pradhan, a youth from Jharkhand and Kritika Singh from Chhattisgarh. Ranjan’s suggestions for enhancing the skilling initiatives included setting up a review and rating system for the various skilling centres and training youngsters on sustainable activities (such as water harvesting, clean air). Kritika spoke about how training at the PMKK centre had opened up opportunities for her in the form of scholarships, and how the personality development courses were empowering youngsters like her with more confidence, thereby making them more employable.

Another initiative launched to celebrate World Youth Skills Day was the Let’s Talk Skills campaign. The aim of the campaign, jointly launched by Skill India and UNDP, is to create awareness about the various skilling initiatives and create a dialogue with the youth to get their ideas and solutions for skilling in the present day. The initiative also specially focuses on the aspirations of young girls.

In India, UNDP has been working on the economic empowerment of women through Project Disha, which aims to empower and enable 1 million underprivileged women with employable and entrepreneurial skills. This project is supported by IKEA Foundation.

On World Youth Skills Day, MSDE and UNDP joined hands to organise a Facebook Live session in association with YourStory, to discuss the aspirations of young girls. Participating in the Facebook Live session, Clement Chauvet, Chief, Skills & Business Development, UNDP said, “The fact that India has such a big young population, we need to skill them so that the demographic dividend benefits the country which is why it is important to discuss their aspirations and fulfil it. This led us to start this campaign. We need to hear young people’s ideas and their voices on what they think are important skills for the future. We don’t know what technical skills will be needed 20-30 years from now, so we need to give an opportunity to young people to acquire transferable and cognitive skills, which will also be a link between education and jobs, and discuss these issues as much as we can in the skilling ecosystem.”

Dr Krishnan, who also participated in the Facebook Live session, shared his perspective on the aspirations of girls. “Historically, women have got a raw deal in India when it comes to skilling. It is for this reason that if women make up half the population, then 75 percent of the resources set up for skilling have to be focused on women, towards evening out the playing field. For example, historically, an auto-mechanic needed physical strength and the job involved more manual labour. But now, the role has become more cerebral. Job roles are getting rewritten as technology is evolving. It has become much easier for women to take up roles that have traditionally been in the male domain. Making the skilling ecosystem more female-friendly brings with it a lot of opportunity. We have already begun this journey. UNDP’s Project Disha is also doing a great job of enabling women with skills by creating the necessary processes and procedures. More organizations should follow this example as women have a lot to bring to the table.”

One among the thousands of young girls who have benefitted from UNDP’s Disha, is 22-year-old Meenakshi, who works as a Quality Analyst in iEnergizer, who shared her experience during the Facebook Live session. “My aspiration was to work in an IT company, and I didn’t know how to fulfil my dreams. So, I enrolled myself in an ITI and went through a counselling session through Project Disha, which also increased my confidence and helped me crack my interview. I think every girl should know her aspirations and desires so that we can discuss that and create solutions. It also empowers us girls,” she said.

Sharing an important message for the youth, Finance Minister Nirmala Seetharaman said, “Do not settle for something just because it is easy, strive for what you want, put your heart to it and you will achieve it. Earlier it was not easy to look for opportunities, but now the government has created an ecosystem for training. I would urge each one of you to utilise whatever opportunity is given to you by the government.”