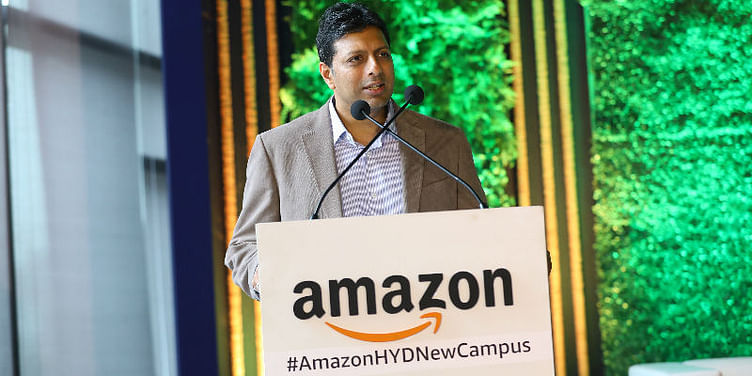 It is the only Amazon-owned campus outside the US and will house over 15,000 employees of its 62,000+ employee base in India.

US-based ecommerce giant Amazon on Wednesday inaugurated its single-largest campus in the world in Hyderabad.

It is the only Amazon-owned campus outside the US and will house over 15,000 employees of its over 62,000 employee base in India, the company announced in a statement.

"With 15,000 work points across 1.8 million sq ft in office space, built on three million sq ft of construction area, this is Amazon's single largest building in the world in terms of total area," it said.

The US company had laid the foundation stone of this campus over three years ago on March 30, 2016.

"We are excited to inaugurate our largest campus building globally here in India at Hyderabad. Over these last 15 years, we have invested significantly in India across 30 office spaces, the AWS APAC Region in Mumbai, 50 Fulfilment Centres in 13 states of India as well as hundreds of delivery stations and sort centres, creating nearly 200,000 jobs in India. This new Amazon campus building is a tangible commitment to that long-term thinking and our plans for India.”

Thousands of employees in the campus will benefit from Amazon’s agile work environment. Here, they can select from a variety of workspaces to suit their needs. It features casual, collaborative workspaces, as well as private areas for concentration and confidentiality.

The campus has interfaith prayer rooms, mothers’ room, quiet rooms, showers, a helipad, and an all-day open cafeteria, designed to facilitate inclusion and diversity. Every detail is aimed at improving well-being and efficiency, from Destination Control Systems to manage elevators that can move 972 people simultaneously. It also has 290 conference rooms and three scrum areas per floor to foster collaboration.

Amazon first started its India operations in 2004 from Hyderabad. At present, Telangana is home to a third of the company's total India employee base across six offices, including the new campus building.