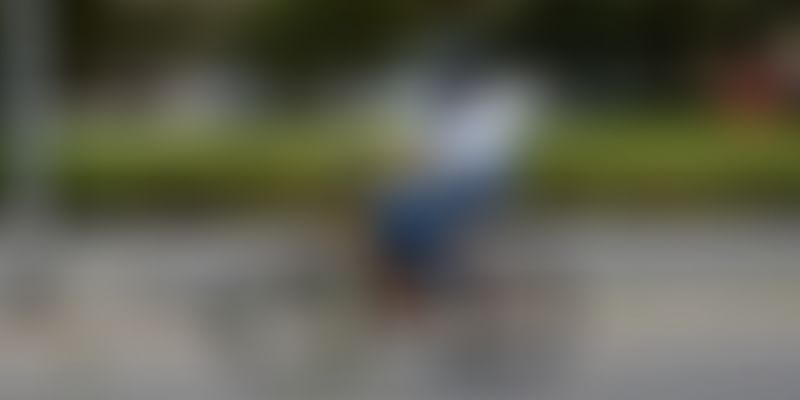 Tilt, a bike-sharing startup with offices in Bengaluru and Nashik, has identified a “niche” in the shared mobility space, and wants to “monopolise” it real fast. Here’s how it plans to grow.

Like many successful startups, Tilt took off as a campus project in 2016.

Back then, it was called ‘Pedal’.

Founder Deepak VS, who was pursuing engineering at Chennai’s SRM Institute of Science and Technology, was inspired by “good transportation solutions” and the public bike-sharing system in cities like Boston and Paris. He wanted to emulate that in Indian cities.

This was also the time when bike-sharing was booming in China, with startups like Ofo, Mobike, and others garnering rave reviews.

But, “shared mobility” was yet to become a trend in India. So, Deepak started small. He created a pool of bikes for commuting within the “huge” SRM campus.

In 2016, Deepak got along with some of his SRM batchmates, and started prototyping, building proofs of concept and testing a range of hardware components to come up with an in-campus shared biking system.

“We even raised a small amount from the university and reached out to a cycle manufacturing company in Chennai. They gave us our first fleet of bikes, and we ran the initial pilot for nine months,” Deepak tells YourStory.

“The pilot helped us refine our idea of what a bike-sharing system should look like. We did a lot of surveys to understand if people really wanted to use bikes, what their needs were, what colours they preferred, and so on,” he says.

But, building a hardware product turned out to be “significantly more difficult” than making software. “It was slow-moving process and needed a more meticulous approach,” Deepak shares. “There was a lot of R&D to be done. Buying components and fabricating prototypes (in small quantities) was expensive,” he adds.

Fortunately, the team came in touch with the head of digital initiatives at TCS Foundation. By early 2017, Pedal was incubated at Digital Impact Square (a TCS Foundation Initiative) in Nashik, Maharashtra.

Deepak says, “We raised a small amount and moved to Nashik to work closely with the Tata Group. They had the idea of a green and sustainable mobility business."

Between 2017 and 2019, Tilt ran successful “micro-pilots” with the Nashik Municipal Corporation and the Nashik Smart City Development Corporation. The startup also deployed its fleet at the Tata Motors campus in Pune, the Tata Steel campus and Jubilee Park in Jamshedpur, Palava Smart City in Navi Mumbai, and several other locations.

In the process, Pedal became Tilt.

“By early 2018, we had evolved our vision from just bike-sharing to a larger solution for integrated mobility. Simultaneously, we added electric vehicles to our fleet. This broader vision prompted the evolution of our brand from Pedal to Tilt.”

Today, Tilt is live in campuses across the country and is “growing very quickly”. It has recorded over 60,000 hours of cycling with over 25,000 users in the last eight months. It accounts for six bike rides per day per user. The startup also claims to have doubled its asset utilisation rate.

In the first two months itself, 100+ employees at Tata Motors took over 2,000 rides with just five bikes. Soon, several departments from across the plant requested for the project to be scaled up, and “we received a purchase order from Tata Motors to deploy the first phase of 30 bikes within the campus,” Deepak shares.

“We’re also experimenting with a bunch of features and seeing if we can incentivise shorter trips to make users take more trips,” he adds.

Unlike most shared mobility startups in India, Tilt is a B2B2c company that works with enterprises, corporations, and townships, which use its system to deploy bikes. Employees or residents can unlock the bikes with their ID cards.

“Campus is a huge opportunity. There are more than 10,000 office campuses in India, and nobody is targeting it. We have created a niche monopoly there and built a value proposition that works. We’re working with many corporates we reached out to via the Tata Group.”

Tilt’s fleet is, what the founder calls, “a heterogeneous mix” of cycles, e-cycles, e-scooters, shuttle buses, and so on. He says, “Every administration and campus has a different need. It cannot be a one-size-fits-all approach. Different users have different needs across different weather conditions.”

By the end of 2019, the startup plans to expand its fleet to over 1,000 vehicles, 30-40 percent of which would be EVs. It has also filed for technology patents that are currently pending approval.

The bootstrapped startup earns revenues from both campuses (through a subscription model) where it deploys its fleet as well as from end users, who use the Tilt app to book rides, and are incentivised for being “good users”.

Funding and the shared mobility landscape

A few angel investors have already expressed interest in the 13-member startup, but Tilt is not too keen on equity dilution.

“We are looking at a strategic investment,” Deepak says, adding, “We don’t want to create a valuation bubble. We want to build a solid, sustainable business instead.”

The shared mobility market is on an upsurge currently. By 2030, Morgan Stanley expects shared miles to account for 35 percent of all the miles travelled in India, and this will further rise to 50 percent by 2040. App-based services are also bringing about serious changes to the transportation industry.

Even though several bike-sharing startups, including Alibaba-backed Ofo, have exited India after struggling to make money, Tilt believes that its B2B model for campuses will create “exponential growth”.

“While various other companies followed the Chinese dockless model of dumping cycles recklessly on the streets of Indian cities, we took an approach of responsible growth that ensured value creation for our stakeholders,” the founder signs off.