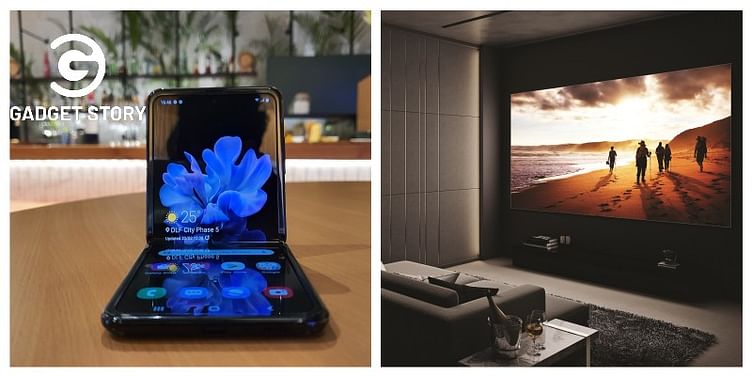 Over the past few months, Samsung has come out with two luxury products, The Wall and Galaxy Z Flip, which have made the competition sit up and take notice

Over the past few months, ﻿Samsung Venture﻿has come out with two new luxury products - The Wall and Galaxy Z Flip - with stunning designs that have made the competition sit up and take notice.

Apart from reaching staggering revenues, Samsung has committed itself to innovation. In the smartphone segment, it already has two flagship devices – S-series and Note-series – which are selling like hotcakes and have swelled up the company’s balance sheets. But beyond that, it’s the innovation that leads to better products, more avenues for revenue, and eventually trickles down to the average consumer.

Innovative devices like the Curd Maestro Refrigerator gives Samsung an advantage in getting to know first-hand what the consumer likes and dislikes.

Foldables is one set of devices that are just about coming into the fold. Huawei has one (but they can’t sell it across most of the world) and so does Motorola (pricey and under-specced). Samsung, on the other hand, has not one, but two. The world is getting ready to adapt to foldable smartphones, and Samsung is leading the charge. It’s a one-of-a-kind product with technology that will hopefully trickle down to smaller sizes and cheaper price points.

Concept devices don’t usually sell in India as brands aren’t prepared to dip their toes in the price-sensitive Indian market. Devices that have a potential in the short-term (a year or two) do sell in small quantities so brands can get consumer data on them. An example is ﻿Xiaomi﻿Mi Mix 2, which was available in India but not the Mi Mix 3 nor The Mi Mix Alpha.

Samsung isn’t hoping these devices to be massive best-sellers but rather expects them to be more commonplace in the future.

Here’s a look at two luxury products that are priced way out of the average consumer’s budget.

Galaxy Z Flip: A costly flip-phone for the ages

This is what Samsung has been pushing for when it comes to smartphone design, but with the screen. The Galaxy Z Flip is a proper flip phone unlike the Galaxy Fold, which was a phone plus tablet.

What will catch the eye of the discerning user is not the interface (many apps are still not optimised for the ‘flipping’ future) nor the tiny screen on the front, which can also be used to click selfies. It’s the design of the smartphone. It is a smartphone that feels incredible in the hand. It’s premium from start to finish and has the shine to carry it off. The flip on the Galaxy Z Flip feels extremely satisfactory and not at all clunky.

The problem though is two-fold, and goes beyond the stunning design of the Galaxy Z Flip. First, the software needs work. Yes, it is running on Android 10, the latest mobile OS from Google, but most of the apps aren’t yet updated to take advantage of the ‘dual’ screen. Second, the outer glass covering of the Galaxy Z Flip is very fragile. One drop from the pocket and it’ll crack. The glass screen on the inside though is well-protected, thanks to the raised bumper/edges.

When folded, the Galaxy Z Flip is thick, as thick as two Galaxy Note 10’s stacked together. It is very easy to keep in one’s pocket. Unfold the device and you’ll get to see and use the 6.7-inch Infinity Flex Display with a 21.9:9 aspect ratio. It’s a little narrower than most phones in the market, but that makes it easier to use with a single hand.

The dynamic AMOLED display comes with excellent viewing angles and colours that pop. There’s a cutout in the display that holds the selfie camera. However, the one downside is that it doesn’t get as bright as any of the other conventional Samsung smartphones on the market. Samsung has added a protective layer on top of the 30-micrometre thin layer of glass.

All in all, the Galaxy Z Flip is a good second attempt at a foldable device and certainly cheaper and more specced out than Motorola’s Moto Razr, but it is priced out of the reach of most consumers. Not many people would want to pay over one lakh rupees to own a device that is just learning how to navigate the market.

Wait for foldable smartphones to become more refined and more commonplace before you decide to spend your hard-earned money on one.

The Wall: A gigantic and immersive TV for the rich

It was at the end of December last year when Samsung launched The Wall in India. It’s 100 percent a luxury product and is squarely aimed at the uber-rich.

MicroLED is the new TV technology from Samsung. It’s based on their own Cinema Screen technology that is designed for movie theatres. MicroLED can create gigantic screens for the home theatres.

It is really big, indeed. Coming in three sizes – 146-inch, 219-inch and 292-inch – with the latter pumping out 8K content. The 146-inch version is an immersive experience that I got to check out at Samsung’s Executive Briefing Centre in Gurugram. It’s a TV that is over 10 feet wide, and almost six feet tall. It’s meant for cinema and gaming but can also be used to display art.

When switched to the ambient mode, The Wall can display pre-set digital art or even your pictures. You can even add frames to the art. Finally, it can even blend in seamlessly with the wall next to it.

MicroLED basically uses an array of tiny LEDs – millions of individual tiny LEDs – to create the immersive image. MicroLED means that the black areas of an image are completely black because there isn’t any light being emitted by their pixels. Samsung says the 146-inch size complies with the standard ceiling height.

The Wall has a peak brightness of 2,000 nits. Add to that AI upscaling, Quantum HDR technology and 120Hz refresh rate and with HDR+ content, you get breathtaking images that literally pop.

Samsung has said that The Wall optimises the picture quality scene-by-scene, regardless of the original source format. It uses its own Quantum Processor Flex alongside the AI-picture quality engine.

Samsung has put a lot of effort into The Wall and it shows. One gets lost into the world as the images become larger than life. It’s an experience like no other, but one that is out of reach of the average consumer. While playing video games like Forza Horizon or watching movie trailers or even seeing Messi curve the ball into the net, one feels like a part of the action.

Starting at a colossal Rs 3.5 crore for the 146-inch 4K version and going all the way up to Rs 12 crore for the 8K version, one wonders as to just who the clientele will be. Maybe it’s best-suited for commercial spaces like stadiums/arenas, hotels or even retail outlets. Having one at home though is something most people would give an easy pass, unless you like to be ostentatious.

It’s not just the cost. It’s the gigantic size of the TV that most homes in India can’t accommodate. Maybe Samsung can adopt this technology to smaller screen sizes, reduce the price, and then pitch it to the consumer?

Until then, The Wall from Samsung remains too high for the average consumer to climb.