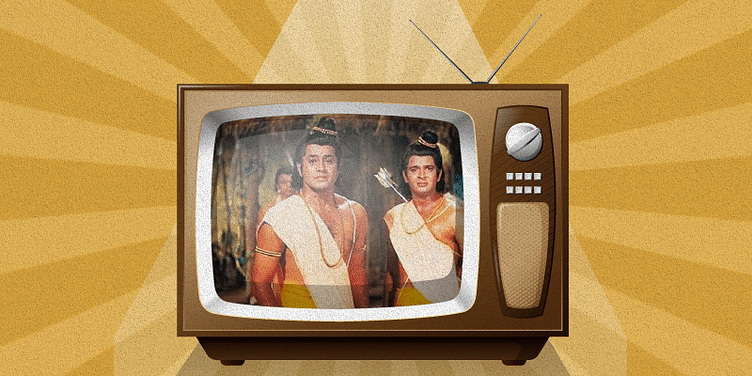 Doordarshan is rediscovering its lost glory amidst the lockdown. After nearly three decades of ceding ground to cable TV, it is India's most-watched channel again riding on reruns of old shows.

“It is strange how we hold on to the pieces of the past while we wait for our futures.”

India’s state-owned broadcaster Doordarshan has taken people on a nostalgic trip during the coronavirus lockdown. It has made us revisit our collective past with reruns of iconic shows from the 80s and 90s.

Back then, the world was slower, entertainment choices were limited, and leisure mostly meant a family gathering in front of the TV set. Doordarshan was integral to Indian lives. Be it news, learning or entertainment — it was the only source.

The tide turned with the advent of satellite television in the mid-90s, and the explosive growth of private television channels that ensued. Nearly three decades on, DD is rediscovering its time in the sun.

From much-celebrated adaptations of epics like Ramayan and Mahabharat to other mythological shows such as Shri Krishna, Uttar Ramayan, Vishnu Puran, and Chanakya, it has gone all out to entertain millions of people locked indoors.

Not only has Doordarshan succeeded in attaining record viewership in the last few weeks, but it has also generated massive online chatter ranging from memes and video grabs to nostalgia posts from viewers.

The buzz around these shows and the social media reactions have led to an increased brand recall for Doordarshan. In April, 'Ramayan' also became India's most searched term in the entertainment category, according to SEMrush (an online visibility management platform).

"The current buzz around Doordarshan has resulted due to rise in viewership driven by the reruns of the immensely popular mythological shows. The high emotional and nostalgic value attached to these shows, the lack of fresh content on mainstream channels owing to a halt in the production, along with the scarcity of other outdoor family entertainment options are the key reasons for their popularity in current times.”

In the very first week of reruns, Ramayan episodes got 42.6 million tune-ins and garnered 6.9 billion viewing minutes on average, according to Nielsen and the Broadcast Audience Research Council (BARC).

DD National also became the highest-watched channel in India for the week ended April 3. Since then, Doordarshan’s leadership position among Hindi General Entertainment Channels (GECs), which account for a lion’s share of the TV viewership in India, has continued unabated.

Riding on reruns, Hindi GECs have witnessed an all-time high of 8.5 billion impressions in the last three weeks, according to BARC-Nielsen. Doordarshan has witnessed a whopping 40,000 percent jump in viewership since the reruns began.

In fact, Ramayan viewership is now being compared to that of the IPL, which is typically a trendsetter on TV and OTT platforms in India.

On April 17, Prasar Bharati (the parent body of DD and All India Radio) announced in a tweet that Ramayan was the highest-watched entertainment programme globally, recording a viewership of 77 million. Mythological shows have been watched by a record 353 million viewers for an astounding 109 billion minutes so far.

Many of these shows are also being broadcast in non-primetime slots. In fact, non-primetime viewing has increased by a huge 79 percent since the lockdown. As a result, advertisers are flocking to national television all over again. Since April 1, Ramayan and Mahabharat recorded a 14X and 12X jump in advertiser count respectively.

Even though increased advertising is a delectable proposition for DD, it has irked a few viewers who want uninterrupted content. They’ve taken to social media to call for curbs on ads. In response, Prasar Bharati CEO Shashi Shekhar wrote in a tweet,

"Would request everyone's patience with the advertisements. Brands reaching out to a large audience spurs consumption and economic activity at this critical juncture. Also, every rupee of commercial revenue to DD is a rupee of taxpayer money saved."

What is attracting audiences

Communications consultant Karthik Srinivasan (formerly National Lead at [email protected]) believes that the rise in viewership is due to a combination of factors.

“The fact that most adults are stuck at home and are constantly looking for ways to keep themselves engaged, and also the lack of new content on TV. The reach of OTTs is much limited compared to DD/satellite TV in any case. Plus, the lure of nostalgia, particularly for the adults who grew up in the period when these older shows were first aired.”

Surely, nostalgia is a great pull. Many young parents have admittedly taken to watching reruns to educate their kids about Indian epics and mythological texts.

Raju PP, who runs a technology portal in Bengaluru, says, “We watched Mahabharat primarily for introducing it to our four-year-old daughter. My wife had been telling her stories of Lord Krishna, so she was very fascinated to see the story on TV.”

For startup professional Adit S (name changed), watching Ramayan reruns has served as the ideal lockdown pastime. “I got addicted to the show,” he says, “And then, out of curiosity, I even followed the actors on social media, and went on YouTube to watch all the related content, actor interviews, etc.”

So, what is it about Ramayan that enthuses a 30-something techie, who’s mostly bred on a diet of cable TV and digital media?

“I think Ramayan had a very strong emotional connect. There was a lot of family bonding on display too. There’s much to learn from the way Lord Ram expresses his anger and handles different situations. Mahabharat, on the other hand, is more about strategy and battles and friend-versus-enemy.”

These are universal themes, of course, and will find relevance at any point. But when you add a dash of nostalgia, the results can be phenomenal.

Going beyond epics; catering to demand

When I&B Minister Prakash Javadekar had first hinted at the re-telecast of Ramayan during the lockdown, he was immediately pilloried for trying to deflect attention from a global crisis and perhaps even pandering to an increasingly right-wing citizenry.

But in the weeks that followed, public sentiments reversed.

The oldies caught on for nostalgia sake, and the young ones dipped into it to get glimpses of a bygone era. New demands from filmmakers, political leaders, and the public started pouring in.

In a letter to the I&B Ministry, he said these shows “will help people develop curiosity about our history and our Constitution”.

He also requested the Centre to obtain highly-acclaimed international science documentaries and shows like Cosmos: A Personal Voyage by Carl Sagan and Cosmos: A Spacetime Odyssey by Neil deGrasse Tyson for telecast on Doordarshan. Some viewers have even asked for a rerun of Malgudi Days (based on RK Narayan’s cult novel).

Does it make business sense?

Despite the roaring popularity Doordarshan enjoys right now, a question that plagues media buyers and analysts is: Can it sustain the audience interest, especially after the lockdown is lifted and people resume their routines?

A 46 percent drop in viewership has been reported as Ramayan transitioned to Uttar Ramayan this week. This is primarily because of no repeat telecast of the latter show, according to BARC-Nielsen.

KPMG’s Girish says, “Once the situation normalises, reruns of shows are unlikely to garner similar viewership levels. In order to remain relevant for advertisers in the longer run, Doordarshan would need to have a robust and compelling fresh content pipeline to be able to sustain user interest and viewership.”

Unless DD manages to monetise the old content, survival could be a challenge. Despite the increased advertisers on the shows, the cost per second rates are quite low compared to usual television standards.

For instance, a 10-second ad spot on Ramayan costs anywhere between Rs 60,000 to Rs 70,000. A similar ad spot on cable TV, on the other hand, could cost a few lakhs and double that on private sports channels. Also, there’s the undeniable aspect of HD-fed millennial viewers finding retro visuals below par.

Once fresh content is readily available on satellite channels and OTT platforms, would they still tune into gaudy bow-fight scenes?

Karthik doesn’t seem to think so. “Even I would probably cringe at the now-corny graphics of Ramayan, and so, my kids would perhaps find it even more silly, having been exposed to far more sophisticated storytelling meant for their ages,” he says.

“And, nostalgia is an age and time-specific phenomenon anyway; one person's nostalgia need not be another's,” he adds.

For Doordarshan, this is an unprecedented dream run that is likely to continue for a few more weeks, at least. But only time will tell if nostalgia can sell in the long run.