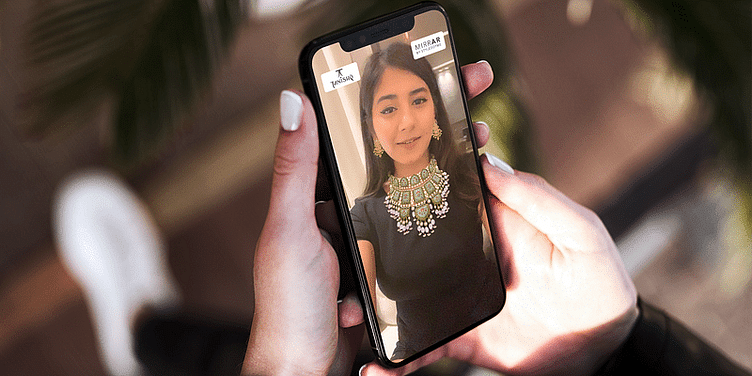 Working on a B2B SaaS model, StyleDotMe’s MirrAR enables clients such as PCJ and Tanishq to allow customers to virtually try on jewellery in real time.

Most customers are keen to try on high-worth goods such as gold and diamond jewellery before buying them. However, brands usually don’t have all their designs on display across stores. Graphic designer Meghna Saraogi noticed this pain point when she accompanied her mother for jewellery shopping in Indore.

“Indian jewellery stores have a tendency to showcase more designs through pamphlets and pictures, than physically,” she tells YourStory.

Meghna realised the influence of visual design on purchasing patterns, and went on to launch Augmented Reality-based fashiontech startup ﻿StyleDotMe﻿ in 2015.

In November 2017, the startup launched its cutting-edge AR product mirrAR 2017. The realtime product allows clients to provide access to a large inventory to its customers. This allows shoppers to try on jewellery on a digital platform, without having to actually wear these pieces.

MirrAR is currently being used by jewellery retailers, including PC Jewellers, Tanishq, Kalyan Jewellers, Amrapali, and Senco, among others.

An enthusiastic shopaholic, Meghna loves shopping but never alone. “I am always confused about what looks good on me. Previously I used to end up asking the salesgirl or send pictures to my friends via some social media,” she says.

In 2014, this personal pain point led Meghna to work on a solution.

Meghna, who worked as a graphic designer then, did a couple of freelancing projects to save up and start her own venture. With an initial investment of Rs 10 lakh, Meghna founded Gurugram-based StyleDotMe. The B2C product was simple -- it worked as an instant advising platform.

However, Meghna says, “The product was way ahead of its time.” While there was some traction, expanding a B2C business involved a lot of capital investment.

It was then that she decided to launch B2B SaaS product: MirrAR. “I always wanted to revolutionise the shopping experience,” she says.

In 2018, AR, artificial intelligence (AI), and crypto expert Akhil Tolani joined StyleDotMe as a Co-founder and CTO. He was a former UI/UX designer at WedMeGood. The team currently has about 30 employees.

MirrAR works in a plug-and-play manner. The SaaS product is available in two models: online and offline.

In the online model, MirrAR can be integrated with any platform, app, or website. The charge for this model is Rs 50 or $0.75 per SKU, per month. The initial set-up cost varies with client requirements and can range between Rs 15,000 and Rs 5,00,000.

In the offline or in-store model, MirrAR is plugged into any device, say an iPad or tablet. This allows customers visiting the store to try out jewellery not available in a particular store. The offline model is available on licensing, and the cost is Rs 1 lakh per device, per year.

“Once onboarded, brands need to digitise their inventory, which is then available in-store, on the web, and on the app, for customers to access and try on. The onboarding process takes only 30 minutes,” Meghna says.

The co-founder says the initial challenge of introducing MirrAR in the market was that traditional jewellers were hesitant to take their family business digital. “The product development of MirrAR is strongly driven by feedback from our partner clients and their customers,” Meghna says.

A report by Gartner Inc suggests that 100 million users will shop in AR, online and in-store, by the end of this year, giving scope for startups to venture out and succeed in the space. According to MarketsAndMarkets, the AR market in India is estimated to grow from $10.7 billion in 2019 to $72.7 billion by 2024, growing at a CAGR of 46.6 percent.

Over the last couple of years, players like YouCam and ModiFace have been focusing on AR in the beauty and makeup space. CaratLane was one of the first players to bring AR into the Indian jewellery space. It was later acquired by jewellery brand Tanishq. Other players operating in the AR space include Holition, Modiface, and Ditto.

However, StyleDotMe claims to have an USP. Meghna says, “MirrAR works automatically on digitised versions of jewellery in real time, while other products in the market require consumers to manually position the jewellery on themselves.”

MirrAR has been showcased at five national and international exhibitions, including JCK Las Vegas and Inhorgenta in Munich. Its first client was PC Jewellers and it currently serves more than 150 clients, in more than 28 Indian cities, New York, Singapore, and Dubai.

“We have grown our B2B customer base by over 200 percent year on year,” Meghna says. Compared to FY19, StyleDotMe has driven its product revenue by about 300 percent.

The AR-based startup recently raised Rs 3.5 crore in investments in its pre-Series A round. The round was led by Survam Partners, with participation from Bobby Kothari, Director of Jewelex India, and Indian Angel Network (IAN).

Prior to this, in May 2019, StyleDotMe had raised a bridge round of funding from IAN investors Ambarish Raghuvanshi, Ajay Gupta, Deval Tibrewalla, Hari Balasubramanian, Rajan Anandan, Saurabh Srivastava and Raman Roy. Angel investors Ritesh Malik of Innov8, former Hero Corporate President (Strategy and Finance) Rohit Charana, and Josh Talks Founders Supriya Paul and Shobhit Banga also participated in the round.

Going forward, Meghna says StyleDotMe aims to capture 50 percent of the market by 2025. The startup has also entered the eyewear and watches industry, and soon plans to make an official launch.