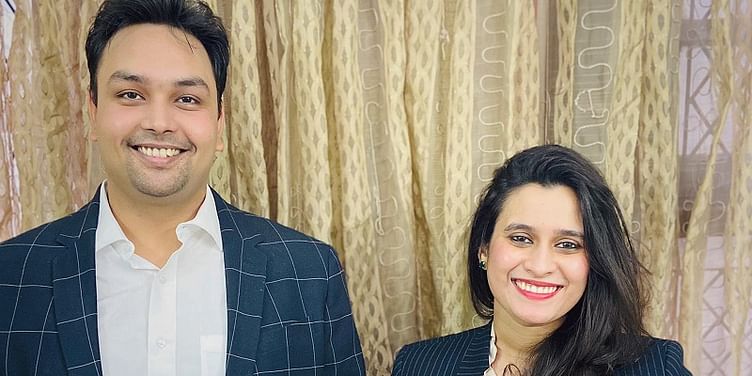 The history of drones can be traced to the mid-1800s when European armies used unmanned balloon aircraft to deliver bombs and win wars. Since then, the unmanned aerial vehicles have found various applications –geographic mapping of inaccessible terrain, search and rescue ops, law enforcement, border control surveillance, precision crop monitoring, storm tracking and forecasting, and more.

The end-to-end platform helps collect, process, visualise, and digest drone data to offer decision makers with deep learning-powered insights that to make maps meaningful. The drone-based solutions can be used across various industries, including agriculture and urban planning.

“We are also working with the Aditya Birla Group and SAP for a command and control centre deployment with volumetric analysis from drone-based maps. The idea is to have drone-based analytics work directly with their resource and project management processes,” Ayushi says.

As part of the Tech Emerge Resilience programme started by World Bank, the drone startup is offering its solution to SDMAs across the country to “build disaster preparedness and resilience with a robust drone 3D mapping solution to assess risk and coordinate first responder efforts on the ground”.

Utkarsh, a computer science graduate from Johns Hopkins University, discovered the extent of drone capabilities when he was working with the tech team at Johns Hopkins. His co-founder, Ayushi, also worked and studied at Johns Hopkins before moving to India.

The seeds of Drona Maps were laid when Utkarsh brought a drone back to India and deployed it during the 2016 Sawan Jhula mela in Ayodhya, which hosts nearly three million people during the festival.

The local government was tasked with creating urban infrastructure to manage this huge influx, and Utkarsh – using his drone to create 3D maps – helped them create exit/entry routes and identify areas to be cordoned off.

He helped the local bodies map the area in just three days – a task that would’ve taken much longer on foot or by using satellite images.

"The scale of impact that was possible with an off-the-shelf commodity, such as a small drone, is what drew us to this idea," Ayushi says.

Since then, the drone startup has deployed its tech in 100 Indian villages and 10 urban areas. The founders of the bootstrapped startup have invested more than $300,000 of their own money to date.

The many use cases

Over the last three or four years, a number of drone manufacturing companies have cropped up, each trying to create their own niche across sectors such as mining, energy, and oil and gas.

Drone Maps works with several such drone service partners who collect images for them. These images are then reconstructed into maps, using deep learning.

Drone-based maps – the kind Drona Maps produces – have found varied uses around the world. Developed countries use them in the agriculture and construction domains. Emerging countries, like China and India, often use them to strengthen defence and security.

Amidst the pandemic, Drona Maps has been able to leverage its technology by adding fields to its dashboard that are relevant in tracking the progress of the virus, along with other inputs.

"Providing a central dashboard that can aggregate and create reliable master geo-databases to provide an accurate estimate of the situation to decision-makers has turned our business into a complete war room solution, and we’re offering this for free.”

Consumer data from applications such as hyperlocal delivery services and mobile health clinics, among others, can also be integrated with the dashboard.

For their help in battling COVID-19 in India, the startup recently received an undisclosed grant from ACT, a Rs 100 crore initiative set up by the Indian VC ecosystem to fight the pandemic.

Over the next 18 months, the startup plans to provide coronavirus solutions – in partnerships with state authorities – for as many places across the country as possible.

Currently, Drona Maps’ coronavirus solution has already been implemented in Rajasthan, Punjab, Chhattisgarh, and Haryana, and is likely to be deployed in Karnataka and Andhra Pradesh soon.