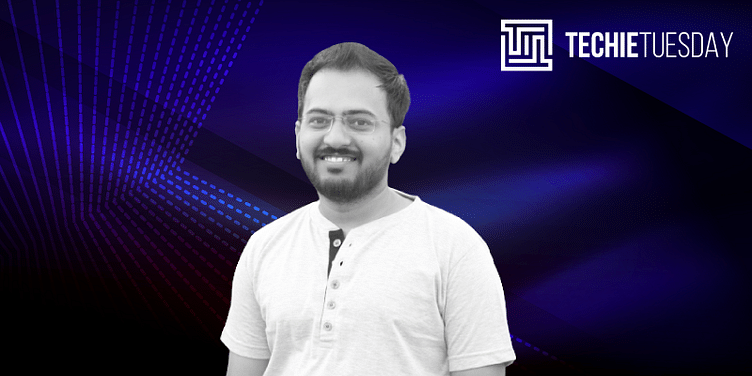 In this week’s Techie Tuesday we feature Prashant Borde, Co-founder and CTO of Recko. He had earlier launched Dropbox-like platform GridAnts, which aimed to revolutionise distributed computing and was acquired by Myntra.

Curiosity led Prashant Borde to start coding while at school.

The boy who chose to learn programming and coding on his own is now Co-founder and CTO of ﻿Recko﻿, a platform that enables AI-powered reconciliation of digital transactions. He believes technology has the power to connect dots and bring solutions that can sometimes be beyond basic comprehension.

“There wasn’t any particular reason why I liked coding or computers. I remember that two of my favourite things in school were computers and cricket,” says Prashant, who hails from Aurangabad.

In 2004, when his school introduced computers, he went an extra mile to learn new programs and coding languages.

When he was in Class 10, he was exposed to the world of IIT and JEE. “It wasn’t a common conversation, but I learnt by researching what my options after Class 10 and 12 were,” Prashant says.

In 2008, he got into IIT Gandhinagar; one of the few students who had coded and programmed before joining the course. His course at IIT further piqued his interest and he ended up taking several projects and side courses in Java and PhP, apart from his course curriculum.

Prashant started by building the website and apps for his college’s first tech fest. After that, people approached him for different projects.

By the time he reached his second year, he built an educational pop quiz app to help students learn different courses and subjects in a gamified manner.

In his third year, in 2011, his coding abilities landed him an internship at Caltech, one of the top universities for science and technology across the globe.

“At Caltech, I worked with a group of scientists building a technology that could detect earthquakes. This would help in taking immediate action and reducing secondary hazards,” Prashant says.

On returning to IIT, Prashant continued working on the project to build a system for Gujarat’s Bhuj region.

“During this time, I started working on distributed systems that allowed us to collect data from wider geographies,” Prashant says. Around 2011, he simultaneously also worked on another project where he built a biometric authentication system using Raspberry Pi.

“There were many new languages and I wanted to try and experiment with as many as possible,” he says. By 2012, he had also built a platform where college students could collect money for their gig projects.

College students looking to build a product out of their curriculum need funding.

“Most students talk to inter-departmental heads for funding. But many times, an interesting idea doesn’t take a lot of money to build. So I built something similar to Kickstarter. I had seen my batchmates get funding after several months for a small quick idea, and many college projects just don’t get started,” Prashant says.

The main problem was collecting money as few people in college had cards in 2012. Payment systems also weren’t as evolved as today.

“I got a small space inside an office, where people could come, deposit money, recharge their wallets, and transfer money into projects,” Prashant recalls.

Understanding the delivery in tech

However, the product didn’t kick off as he had hoped. So in 2012, the final year of college, he and a couple of friends started discussing business ideas.

All of them had experience in microcontrollers and coding, and they started building a system for kirana shops to accept delivery online.

“We had built an Android app. Consumers could order products, and details would be on Raspberry Pi in different kirana stores. It was a distributed inventory management system; data of all stores was online and consumers could access only on request,” he says.

The team didn’t have logistics in the flow; it relied on kirana owners for delivery.

The app was operational with local kiranas stores and restaurants, but didn’t have a long life. “We were techies; we built a great tech product but didn’t realise that the problem was that of delivery and operations, not technology alone,” Prashant recollects.

By 2014, several startups were focusing on hyperlocal delivery.

Understanding their weakness when it came to delivery, Prashant says they decided to pivot and build something like a ‘Dropbox’ but without a central server. By this time, people were becoming conscious about their data and its privacy.

“It was a play on decentralised setup. We would give a cube-like device to users, with a software on top - Cube OS, which could connect to multiple devices and synchronise data from across devices. It could open applications across devices. For example if you are on a Linux laptop that cannot run Photoshop, but have a windows system, it could connect the device and work across the systems,” Prashant explains.

The team, which had moved to Bengaluru by then, raised funding from Accel Partners and Helion Venture Partners.

The founders realised that the hardware component of the product couldn’t scale, and focused on software and acquiring users. This then pivoted into a productivity app, which could sync data across all devices. One could also open applications and integrate multiple data sources.

This was the birth of GridAnts.

“Multiple accounts across different platforms could be integrated and stored on a single account and operated from a single app. It was a super app for consuming and sharing content. This needed personalisation, so we worked a lot on machine learning and built chatbots. But for any social app, you need a high threshold of customer base for the network effects to trigger,” he says.

In 2015, there weren’t a lot of people thinking about content. Google had launched Google Now and Google Allo, which meant the Gridants team needed deeper pockets.

They were looking to work with multiple partners and this was the time when Myntra was building personalised feeds. In 2016, GridAnts was acquired by Myntra.

Looking at the world of fintech

By 2016, fintech was picking up, and Prashant was curious on how technology could work as a leveller. Keen to learn more, he joined Reliance Jio, which had a small team in Bengaluru.

“Jio had just launched 4G and had a massive user base, but didn’t have much to serve the user base. They were building internal payment gateways and their wallet, which is what I was working on,” Prashant says.

The team found that people were using the apps, but verification was often needed after payment as there were a lot of bugs. There also was the problem of integrated discount rates that would cause problems.

“I interacted with the finance team and learnt a lot about reconciliations and the problems in the space,” Prashant says. He went on to build a small portal to solve the problem while at Jio.

The problem got Prashant thinking, and he began speaking to several people to understand the many pain points.

He soon reconnected with a friend from college, Saurya Prakash Sinha, and the duo founded Recko in 2017.

The platform, which enables AI-powered reconciliation of digital transactions, has recently started working with banks, NBFCs, and insurance companies.

“We focused on helping finance teams understand and analyse different sources of data. The platform helps reconcile millions of transactions within hours, without writing a single line of code. The idea is to help companies keep track of the transaction lifecycle and commercial contracts for organisations,” he says.

Today, Prashant leads a team of over 78 engineers. While hiring techies for the team, he says he looks at the intent of the person.

“Do they really care about the problem, and can they work at the rate of a startup? Another thing is design ability…we don’t focus too much on data structure algorithms; we focus on practical solutions that work real time,” he says.

Advising all techies, Prashant says, “Try to build whatever you have learnt in coding. When you create something that works and is used even by a small number of people, it is a strong motivator.”