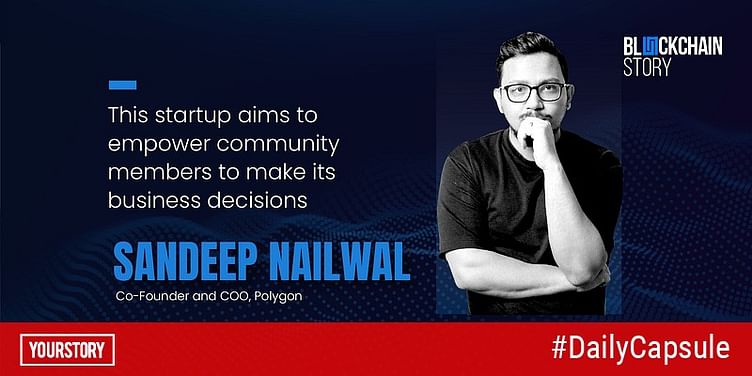 Essentially, DAO is an organisation where certain decisions are taken by communities of users or participants, and votes or actions are represented by some form of a blockchain transaction.

However, in August this year, in a first-of-its-kind move among Indian startups, Bengaluru-based blockchain firm ﻿Polygon ﻿(previously Matic Network) announced it is building a decentralised autonomous organisation (DAO).

In an interaction with BlockchainStory, Sandeep Nailwal, Co-founder and COO, Polygon, says:

“So far, the prominent way for humans to interact and communicate has been through centralised institutions such as banks, companies, government bodies, etc., but this has given rise to a number of instances of malpractice and corruption. DAOs are a radical, paradigm shift where everyone in the organisation can participate in decision-making transparently on blockchain.”

What is a DAO? Essentially, it is an organisation where certain decisions are taken by communities of users or participants, and votes or actions are represented by some form of a blockchain transaction.

Forming a DAO for Polygon’s decentralised finance (DeFi) ecosystem is "the next logical step" to aiding collaboration between blockchain-based systems, believe the founders.

A DeFi ecosystem is a network of financial products and services that are decentralised, don’t rely on centralised entities like banks and governments, and make use of blockchain technology.

Students in India often lack industry-relevant skills despite the presence of 50,000 higher education colleges across the country. Sunstone Eduversity, founded by Ashish Munjal and Piyush Nangru, is looking at bridging this very gap with a data-centric and scientific model.

The duo believes students are now looking for more outcome-based learning, which makes Sunstone an ideal choice. In this chat with YourStory, the Sunstone co-founders talk about their vision, evaluation metrics, growth, and more.

Ayurveda, which was once considered a “sunrise sector,” has today entered people’s daily vocabulary. Until a few years ago, the market only had a handful of prominent names such as Baidyanath, Patanjali, Emami, and Hamdard, but today, the scenario seems to be changing.

Launched in February 2020 by Ayush Aggarwal, Faridabad-based ﻿Rasayanam﻿ is an Ayurveda company that is navigating its way into this market. It manufactures and sells products such as Nano-curcumin, Kashmiri saffron, Ajwa dates, Ashwagandha, etc. Read more.

How Maavni Designs is promoting Odisha handicrafts and empowering artisans

Entrepreneur Smaranika Mohapatra has always been inclined towards handicrafts. After working for almost a decade in the IT sector in Bangalore with several companies, including TCS and JP Morgan Chase, she returned to her hometown, Bhubaneswar, and took the entrepreneurial plunge to work in the handicrafts segment.

With an aim to promote Odisha’s handicrafts across the country, Smaranika launched Bhubaneshwar-based ﻿Maavni Designs﻿ in 2019. Read more.

“Food is an important part of our cultural identity and we are in danger of losing a part of ourselves if we don't document those recipes. That is how Recipes For Life came along.”