India as a unicorn nation: Decoding the way for the next crop of billion-dollar phenomenons 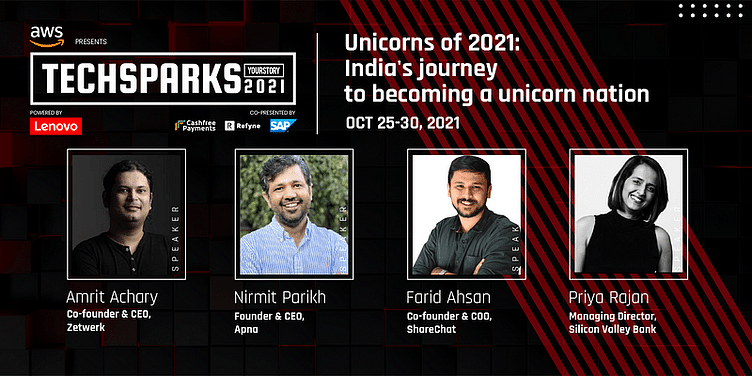 Unicorns of 2021- India's journey to becoming a unicorn nation.mp4 from YourStory Media on Vimeo.

India is home to nearly 40,000 startups, making it the third-largest startup ecosystem in the world. The country is also becoming a global unicorn hub. The number of unicorns India is producing has been increasing over the years.

From producing just one unicorn per year between 2011 and 2014 to seeing 33 new billion-dollar companies so far this year, the landscape has changed - and how! Since 2014, a total of 66 startups have made it to the prestigious unicorn club, collectively raising $50 billion across more than 3,700 deals. Clearly something incredible is happening in India’s startup ecosystem that warrants attention.

While we celebrate these achievements, we can’t overlook the ‘soonicorns’ waiting in the wings — the future unicorns — the ones who will continue to drive India’s growth.

To decode the way for India’s next crop of billion-dollar phenomenons and help understand what it takes to achieve the coveted billion-dollar status, three of India’s 2021 unicorn founders — Farid Ahsan, Co-founder and COO, ﻿ShareChat﻿; Nirmit Parikh, Founder and CEO, ﻿Apna﻿; and Amrit Acharya Co-founder and CEO at ﻿Zetwerk﻿, got in conversation with Priya Rajan, Managing Director at Silicon Valley Bank, at TechSparks 2021.

“In 10 months, we not only raised a record of $26 billion in VC funding between January and August, but we also saw an average of almost three unicorns from one, and we're seeing the trend continue,” said Priya, as she went on to ask the founders about how they exhibited their leadership in the segment to get ahead, what it took to break into the unicorn club, and the defining factors that helped them get there.

“The industry often tries to fit linear narratives on company building. But the reality is that it’s often like a big sinusoidal curve with so many ups and many downs. However, the number one thing that has helped us is that we were very clear about what we wanted to do. We saw a big opportunity in the market and manufacturing and focussed on it,” said Amrit, talking about the growth journey of Zetwerk — a lot of which happened during the pandemic.

“What helped us was keeping the core of our vision the same while expanding it in scope. That, combined with ambition and culture, brought us to where we are,” he said.

Contextualising his experience with ShareChat, Farid spoke about the importance of understanding the market, seizing opportunities, and having staying power.

“You need to figure out how big your market is going to be and spend a lot of time understanding the ins and outs of it,” he said.

“We've been in the game since late 2014. And if you can last long enough, you get a lot of opportunities, along with the ups and downs. It's important that you latch on to as many opportunities that come your way. Hard work compounds over quarters of execution, and it attains that valuation,” Farid added.

“It has been an interesting journey with mathematics and insane customer obsession for us,” said Nirmit about scaling Apna — the unicorn that replaced Udaan, a B2B ecommerce platform, as the youngest startup to reach the unicorn status.

India’s youngest unicorn Apna is hungry for more, aims to go global by touching more than 2B users

At Apna, it’s a network effect on steroids because it’s a marketplace marrying a social network.

“We have a constant habit of going undercover, I started up now by going undercover as an electrician and did a bunch of gigs. Today, all product managers do it as a part of their job. That's our level of insane customer obsession,” he added.

Farid attributes the inflection point in the ecosystem to the rapid growth of smartphone users, internet penetration, groundwork on delivery and logistics by startups like Flipkart, and the development of the Indian VC ecosystem. He also puts it down to execution.

“The ones who execute better will obviously win,” he said.

Beyond these inflection points, Nirmit cites the example of IRCTC coming online as an important point for India. This became the first point of digital transaction for India’s middle-class consumers, which gave them a ton of confidence to start transacting online and paved the way for further growth.

Amrit opines that timing and the quality of capital are also key factors in India’s unicorn growth phenomenon while advising founders on staying true to purpose.

“You're either in the business of creating a new market, which is working or shutting up not doing or, in our case, you're making the market more efficient. Both of these trends are supercharged,” he said.

“Move from a good-to-have to a default product or solution for your customers,” he added.

What’s next for India’s soonicorns

“It's a brilliant time to build a company. I think the timing is perfect; the ecosystem is perfect. What you just need is to come, take some bold bets, and come change the world with us,” he added.

“While you're riding the tide, the tide can also fall. Keep executing, no matter what,” advised Farid.

“Regardless of whether it’s a bull run or a bear run, only the companies that execute well will survive. So, just keep focusing on that,” he added.

“I can't imagine myself having a regular job anymore. Entrepreneurship is a very different experience,” said Amrit.

“To anyone who's tinkering with the thought of being an entrepreneur, I would say, go all in,” he added.