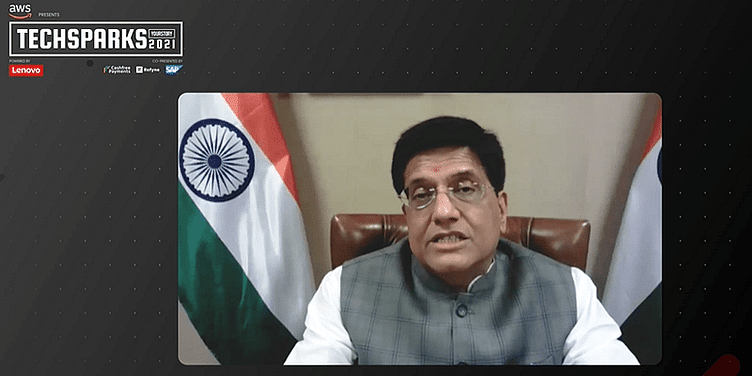 Speaking on Day 1 of TechSparks 2021, YourStory's flagship event, Piyush Goyal, Minister of Commerce and Industry, says India’s startup story is still in its infancy and the government remains committed to creating a conducive ecosystem so founders can aspire for ‘exponential growth’.

India’s startup story is the story of the moment.

The country has the third largest startup ecosystem in the world, with 57,000 DPIIT-recognised startups. With 66 unicorns today, 90 percent of them having entered the $1 billion valuation club only after 2015 and 33 in 2021 alone, the astounding growth figures may suggest that progress is peaking.

But Piyush Goyal, Honourable Minister of Commerce and Industry and Minister of Consumer Affairs, Food, Public Distribution, and Textiles, Government of India, and the Leader of the House in Rajya Sabha, believes otherwise.

Speaking on the opening day of YourStory's flagship event and India's largest and most influential tech-entrepreneurship conference, TechSparks 2021, the minister said India’s startup story is still in its infancy.

“With nearly 70 unicorns today in India, of which almost 90 percent have become unicorns after 2015, we really believe that our startup story is still in its infancy. It has huge potential to grow and makes us proud,” the minister said in his inaugural address at the 12th edition of TechSparks.

He added that India had seen the emergence of more than 22 unicorns in the last six months, averaging three unicorns a month, something “nobody in the world could have imagined”.

Minister Piyush Goyal hailed the power of storytelling in enabling the next generation of “entrepreneurs, disruptors, and innovators”, and encouraged sharing and listening of stories at forums such as TechSparks.

He commended YourStory Founder Shradha Sharma and the team for bringing hundreds of these stories to light, and harnessing the power of storytelling to empower connections, conversations, and collaborations that matter.

What you can expect on Day 1 of TechSparks 2021, India’s largest startup-tech conference

Piyush Goyal said the trend of the Indian startup ecosystem maturing and the growing appetite of investors, in the country and across the world, indicates India’s long-term vision to enable entrepreneurial dreams.

“Today, under Prime Minister Narendra Modi, India is committed to providing a conducive ecosystem to our startups, nurturing them, and enabling them to aspire for exponential growth and a bright future,” he said.

PM Modi had, in his Independence Day speech, said that startups were “the new wealth creators in India” and the government was standing behind them with “full vigour”.

Minister Goyal said the policies of the Central Government - from the National Education Policy and National Health Mission to the liberalised Drone Rules, 2021 - had been known to be favourable to startups, adding that a change in mindset among the populace had also fuelled the entrepreneurial fire.

He credited the spurt in India’s startup ecosystem to an attitudinal shift among India’s younger generation, which is no longer satisfied with job opportunities but would rather chart their own destiny and own their ideas, talent, and businesses. Innovation lies at the heart of this common dream.

“They [young entrepreneurs] want to innovate, invent, and disrupt existing systems. Starting from the local society where we live right up to space, I think startups are making an impact with their ideas, which is truly inspiring,” the Minister said at TechSparks 2021.

Minister Goyal revisited the idea of India as the land of stories, and again highlighted the storytelling prowess of the YourStory team, which has been consistently been showcasing startup stories and inspiring entrepreneurs and aspiring founders.

India has seen an explosion of startups in diverse sectors, ranging from fintech and edtech to agritech and adtech, among others. From taking the Olas and BYJU’S to the world to the Indian model of sustainable living, the startup world is tapping technology to produce viable solutions and targeting demographics and sectors hitherto untouched by tech.

The result is a combination of ideas “pushing progress and prosperity for humanity”, Minister Piyush Goyal emphasised.

“Biotech and the IT industry are combining to advance predictive and preventive healthcare. Communications, robotics, and fueltech are coming together to advance space exploration,” he said.

Of, by, and for India, it’s clear the startup ecosystem is not only staring at a future of exponential growth but also laying the foundation of a resilient economy.

The India innovation chapter has to take cognisance of multiple layers of progress in society and touch human lives in the truest and deepest sense, as only then will the Indian startup story achieve its real meaning, Piyush Goyal said.