How India's engineers have permeated tech in America 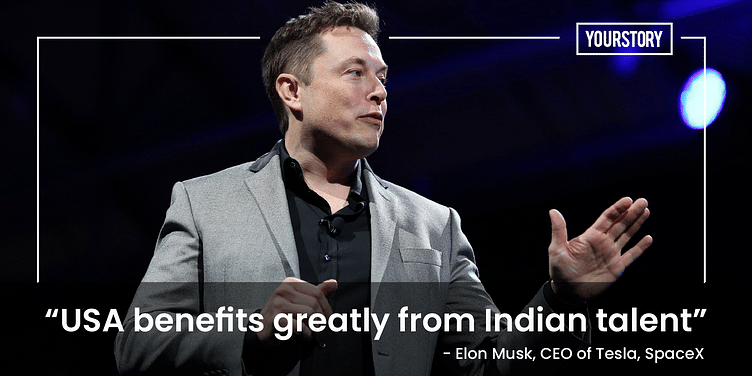 The spotlight is back on India as a hub for global engineering talent — and a feeder school of tech leaders.

A Twitter exchange on November 29 between Patrick Collison, CEO of Stripe, and the inimitable Elon Musk brought the spotlight on India as a hub of global engineering talent — a feeder school of tech leaders.

Musk's response sounded intuitive in the context of Parag Agrawal's ascent from CTO to CEO of Twitter. And, YourStory took note of the CEOs in global tech who are of Indian origin.

But India's contribution to global engineering has been subliminal, as YourStory explored and found. It is spread across various parts of the world's fastest-growing software product companies.

For starters, Patrick Collison's observation about Indian engineering is based on Stripe's actual experience.

Earlier this year, Jayanta Dey — a VMware veteran and grad of the Indian Institute of Technology (IIT) Madras — joined Stripe to head its engineering, and reliability business continuity architecture.

Further, Vishnu Challam, Head of APAC Engineering at Stripe, also hails from India, as does Madhu Kavikondala, Head of Engineering - Business Applications. Both joined Stripe in August this year.

In effect, Stripe is present in India with an engineering R&D centre. It has acquired a startup from here, and is beginning to invest in emerging startups, to back the best product and engineering talent.

For most new-age companies and global unicorns, setting up a development centre in India is now a no-brainer.

"The talent shortage in global companies' home markets is driving the demand for India, as the companies race to accelerate their go-to-market," says Lalit Ahuja, Founder and CEO, ANSR, which helps foreign companies set up R&D centres in India.

By his reckoning, there are at least 50 new-age companies that are in the process of setting up R&D centres in India.

In year one, each of these typically aims to hire between 75 and 100 engineers, ramp the number up to a steady state of 150 in year 2, and then add 10 each year thereafter.

"These product companies don't have outsourcing as an option because they are doing product development and the core strategic work," Lalit explains. "The only way they can have a global presence is through an owned R&D centre."

The straightforward benefit for technology companies in the US is the access to product engineers, who have grown in India's unicorns (Flipkart, Ola), and in the development centres of mature technology companies, like Microsoft, Google and Amazon, in the past decade.

In the past year, there has been an exodus from the development centres in India of Amazon and Google to the engineering R&D centres of fast-growing unicorns like Stripe.

"We were actually surprised that people were easily amenable to moving to new-age companies from established internet companies," Lalit says.

This is happening, he says, because the engineers get leadership positions — and the opportunity to guide the destiny of these new-age companies, which they don't have at the internet giants that have thousands of engineers.

By trade body Nasscom's estimate, there are already 1,300 engineering R&D centres of global companies in India.

Many of the heads of the India centres have grown to leadership positions in headquarters. For example, Ashish Grover, CIO of Chilean retail giant Falabella, headed its development centre in India for three years.

But a lot of the growth is also happening at headquarters in the US.

In the past year, Rajiv Ramaswami was at the centre of a lawsuit from VMware, which the $12-billion cloud computing and virtualisation technology company dropped recently.

Rajiv, an alumnus of the IIT Madras, was VMware's Chief Operating Officer for its Products and Cloud Services until December 2020. The friction with VMware occurred when he joined cloud computing company Nutanix as President and CEO.

But even keeping Rajiv Ramaswami aside, VMware's top management, led by Rangarajan Raghuram, has Sumit Dhawan, an IIT Roorkee graduate, as President.

There is Purnima Padmanabhan, Senior VP and General Manager - Cloud Management, VMware, who completed her engineering in Kota, Rajasthan, before moving to the US for higher studies.

Indian engineers have been permeating the senior management of the Googles, Amazons, and Microsofts since 2015. Now, many more product companies in the US are seeing the same happen in their senior management.

The big shift has happened because of the experience of Indian engineers in the world's fastest-growing product companies like Google and Microsoft, Lalit says. This has played out in the US — and offshore in India.

Since the outbreak of the COVID-19 pandemic, "work goes to where the people are," he adds.

All this is a distant echo of a much-cited article by Thomas Friedman in The New York Times, written in 2005.

"Globalisation 3.0 is not only going to be driven more by individuals but also by a much more diverse — non-Western, nonwhite — group of individuals. In Globalisation 3.0, you are going to see every color of the human rainbow take part," Friedman wrote.

At the time, Taiwan, China, and Vietnam were key locations for the global semiconductor industry. Japan and South Korea were synonymous with automotive engineering.

And the reading was India's software engineers will become vital for the global software industry boom.

The talent pool from and in India is now estimated to be 4.47 million engineers, 74 percent of whom are digitally-skilled, according to trade body Nasscom. Annual enrolment in STEM (science, technology, engineering, math) is at 2 million persons, according to the Nasscom Strategic Review 2021.

If the rhetoric in 2005 was about outsourcing tech to India, what has been proved spectacularly is that the finest engineers who studied in India are now rising in the echelons of global tech.