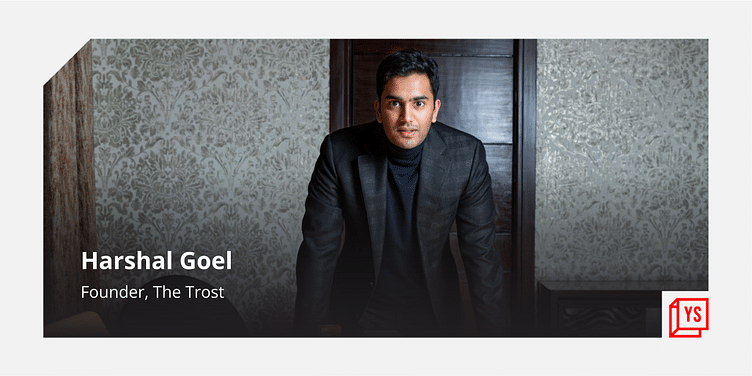 New Delhi-based cannabis startup The Trost offers hemp-based products such as hearts, hemp oil, powder, and CBD oils for better sleep, stress and pain relief, and health benefits. The most popular product, however, are hemp cigarettes.

Sometime in 2017, when Harshal Goel heard that Switzerland had legalised low-THC cannabis (which contains lower psychoactive compounds), he decided to visit the country and learn more about the plant and understand the legal infrastructure that had been set up to handle the decision.

Inspired by the innovation happening around the plant and its use in products such as chocolates, creams, gummies etc, the student at City University, London, decided to launch his own brand in a bid to join in on the conviviality.

The first product he launched in Switzerland was medicinal, herbal hemp cigarettes, and they instantly became a hit. Within three months of launching, the young entrepreneur sold out his entire stock, and saw pre-orders starting to come in for the next batch.

But Harshal turned to the budding hemp market in India — still in its infancy in many ways — and, on realising the growing demand for natural, plant-based products in the country, decided to return home and launch his hemp-based cigarettes here.

His startup, ﻿The Trost﻿ — German for ‘solace’ — sells hemp-based products such as hemp hearts, hemp oil, and hemp seed oil, as well as CBD oils for sleep, stress relief, and pain relief. But the most popular and unique product are hemp cigarettes, called ‘rollens’, that come in two flavours so far.

From BOHECO to India Hemp Organics, these 5 brands are making hemp-based products popular in India

Launched in September 2021, after two years of research and jumping through regulatory hoops, New Delhi-based Trost has been seeing solid demand for its tobacco-free hemp rollens, as well as its CBD oil.

Harshal says over 60 percent to 70 percent of his manufacturing inventory gets sold within a month via the startup’s website,

The D2C startup has raised a friends-and-family round, and is looking for Series A funding in the next two months.

While CBD oils and hemp-seeds and hearts-based products have been around in India for quite some time, hemp cigarettes are a relatively new concept.

Harshal says Trost’s hemp cigarettes — priced at Rs 420 for a pack of five sticks — are good replacements for tobacco-based cigarettes and follow the principles of ‘dhuma yoga’, an Ayurvedic formulation that combines five herbs including cannabis. The herbs are burned and the smoke is inhaled by the user through their mouths and noses.

“Dhuma yoga says the fastest, most potent way to deliver the benefits of these herbs is by smoke inhalation therapy. Our rollens not only help people combat their nicotine addictions, but also help deal with stress, sleep, and respiratory issues,” Harshal says.

He claims, citing Western research as well as Ayurvedic texts, that the burning of these herbs and the inhalation of smoke produced by their burning causes no harm.

The rolling paper that the herbs are packed in, and their filter tips are imported from Poland, and don’t produce any toxic gases when burned, making Trost’s hemp cigarettes a much better alternative to tobacco cigarettes, Harshal adds.

"We were required to furnish extensive toxicity reports to AYUSH to get permissions for our hemp cigarettes, and they agreed with our findings too."

Those who wish to buy these rollens, or any of The Trost’s products, for that matter, have to first complete a consultation with one of the startup’s in-house Ayurvedic doctors, who will then prescribe the appropriate products to treat their health issues.

The Trost is next looking to launch CBD gummies, a popular product in the US and other western countries, as well as expand its existing range of offerings.

With hemp and the cannabis plant gaining traction and followers around the world, the global industrial hemp market size is expected to hit $18.81 billion by 2025, from $3.53 billion in 2019, growing at a CAGR of 32.17 percent, a Valuates Reports stated.

The Asia-Pacific region is expected to hold the largest share of that market, the report added

"Our ultimate aim is to break the taboo around cannabis, even though it has been widely used across the world for decades. Since it is rarely ethically sourced, we aspire to change that perception and create a platform that makes the benefits of cannabis easily accessible for everyone," Harshal says.