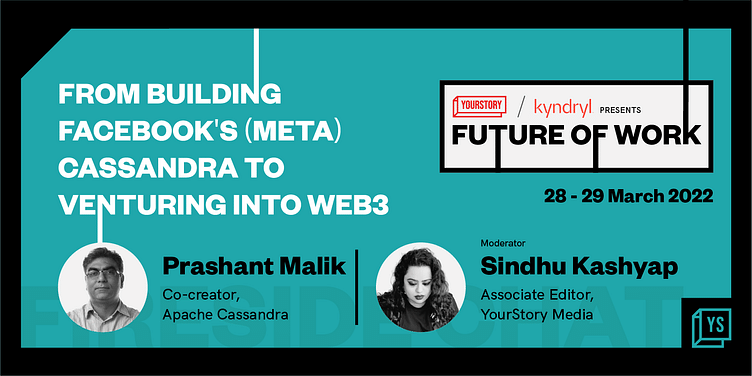 Prashant Malik, is a known name in the global tech and open source community. As the co-creator of Cassandara, a NoSQL database management system, Prashant is known to have built the system that powers the likes of - Facebook (Meta), Instagram, Netflix, and Apple.

“Technology is about transformation and change and it is ever evolving. When I came back to India, I built a startup and was mentoring and advising a few blockchain startups and after a few investments I decided to invest in a few startups in the space, and build Tykhe Block Ventures,” Prashant said at YourStory’s Future of Work 2022 summit.

He explained the world of Web 3.0 is transforming how we look at everything. And that was the cusp for web 2.0 when he along with Avinash Lakshman built Cassandara.

“The idea of building something with NoSQL and later open sourcing it was completely unheard of, and many within the team itself were wary of whether it would work. In fact there was another team working on BigTable, but that couldn’t pan out,” Prashant said.

He explained when the duo were building Cassandara, everything was to be built from scratch. “Nothing like that ever existed, and we didn’t know if it was even manageable and if it could work. But we also knew in our gut it was something new and different. And could change the way we operate, and that is what today Web 3.0 can do.”

The duo had  built the database management system to help manage the growing number of users on Meta, then Facebook. After the system was built, the team put it up on the open source network.

“It wasn’t very common to put things on the Open Source. Facebook (Meta), always believed in Open Source. I never realised the scale the platform would take, but then soon everyone needed a database management system that could take in volumes of users,” shared Prashant.

It was his experience of building Cassandara that opened Prashant to the idea of building newer systems and products. “If the product can solve a large enough problem and change the way systems work, it can create a unique method of working and building and also transform what organisations, and consumers can do,” he said.

The idea he added was to open up systems and democratise the database systems making it easy for anyone to build and scale on top of, and that is what the new era of Web 3.0 is all about. It is about creating open environments where people can thrive.

“Within six months of my joining in 2007, we opened Facebook to the world. Anybody with an email ID could now join Facebook. Those were the days when we would end the day with 10 million new users, and begin the next day with 15 to 20 million users. As the days passed, people were coming in hordes, systems kept breaking, and we had to build batches over and over again, every six hours.”

“We were a small team then and we didn’t know the scale of what we were building. From the universities the platform had started grabbing eyeballs and was onboarding more users, this meant we needed a database that could accommodate more users,” explained Prashant.

The software database needed to be upgraded in order to accommodate more users. “While there already was Google’s Big Table we knew we needed a database infrastructure that did not follow the rules and norms that were then present.” It was this shift that got him to look at building Cassandra.

At that point in time, there was only MySQL, which didn’t scale that fast. Prashant says Mark kept mentioning there was a need for a system like BigTable, and they started building on a similar architecture.

Soon, Prashant was joined by Avinash Lakshman, who had worked on the Dynamo Project at Amazon, which hadn’t seen production scale, and was theoretical in nature. But the core concepts were strong.

“When both of us got together, something magical happened. We thought why not bring BigTable on top of Dynamo? This led to the beginning of building Cassandra. We had named it after an oracle in Greek mythology. We thought it would become bigger than Oracle. And I don’t think anywhere else in the world we could build that kind of project as nobody would trust two guys to go and build something this big. But Facebook had that DNA - to give people super challenging projects,” reminisced Prashant.

He stressed that a techie’s heart must always be into building and learning continuously.

“The world around us is fast evolving and changing. We need to keep pace with this ever evolving and growing change.”