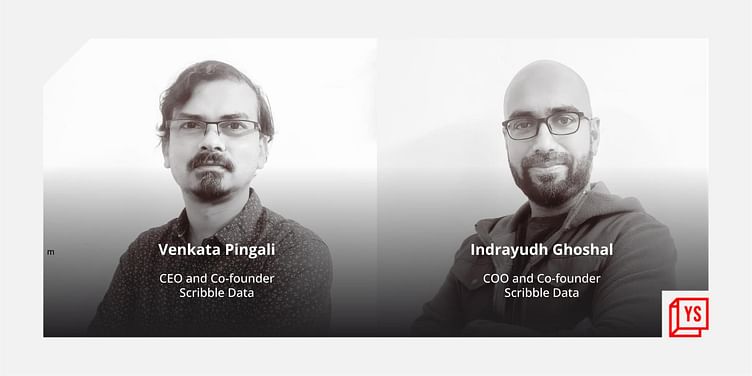 A visit to DMart or Reliance Retail in India on any given day would make one think about Black Friday sales. The limited manpower in stores often falls short to tend to the swarm of shoppers in Indian retail stores.

To solve the issue, ﻿Scribble Data﻿ strives to provide automated and customised solutions for retail businesses to tend to the demand and needs of every customer that walks in through their door.

Some of the apps in the store include dashboards, intelligent reports, and search interfaces that simplify, standardise, and speed up the machine learning models for organisations to deploy in the market. ‘Enrich’ competes with the likes of Google’s Vertex AI, Amazon’s SageMaker, Databricks, Uber’s Michelangelo, and Facebook’s FBLearner.

The startup’s clientele also include companies from sectors such as fintech, edutech, healthcare, and consumer packaged goods.

“Data is driving the world today,” Venkata Pingali, Co-founder of Scribble Data tells YourStory. “Today, most organisations rely on machine learning applications for their daily operations. But these applications are complex and need high-quality datasets. Teams often do not have a long time, a huge team or an enormous budget to build such complex stuff. Scribble Data helps them to build their required applications in a short period and with comparatively fewer resources.”

However, Venkata changed gears and decided to focus on the practicality of software engineering when he met Indrayudh Ghoshal, a McGill University alum who shared his passion for data software. The two data enthusiasts were working on different projects during a campaign when they looked at the organisations such as Facebook, Amazon, Netflix, and Google that develop ML products and applications. They realised that there was a dearth of clean and efficient data to run ML programmes.

So, they decided to found Scribble Data in 2017.

Venkata says, “These big companies have a clear sight of their end goal and what kind of applications they want. But there is no way of verifying that they are using the correct datasets for their apps to run efficiently. It is only when the output is in front of them, after almost a year, do they determine its success or failure. Today, teams do not have that much time and they want their results quickly. The simple feature apps of Enrich solve this problem.”

Although Venkata and Indrayudh co-founded Scribble Data in 2017, it took them two years to come up with the idea of their features’ store ‘Enrich’ in 2019.

Today, the startup has a team of 11 people operating from two offices – Bengaluru and Toronto, Canada, and catering to a clientele across India, Europe, and Africa, including some Fortune 100 customer packaged goods companies and e-commerce majors.

Over the past year, the team saw 300 percent revenue growth with their typical customer engagement being around  $25,000 - 50,000 per use case per year.

Venkata says that an Indian company competing with big names in Silicon Valley as an ML feature store comes with its own perks and challenges. Exploring a niche segment called sub-ML within machine learning to build the feature apps meant the team did not have any predecessors whom they could reference.

“We didn’t have enough guidance while building our final product. Although we came together in 2017, the clarity about our feature store came only in 2019. Most of the work was based on intuition and experience with potential clients in the market,” says Venkata.

The pandemic also posed a challenge in the hiring process and the adaptability to the new remote work environment. However, it also boosted the demand for the platform as most organisations were looking for easy-to-build ML models to ensure smooth operations despite being spread across remote locations.

“We have witnessed tremendous changes in terms of demand and use cases of ML in the past five years. Companies are understanding the value of maintaining good data sets for ML models to work efficiently. This, in turn, increases the demand for features stores like that of Scribble Data,” reflects Venkata.

He believes that the use cases of machine learning would boom 50 to 100X. Scribble Data plans to scale up its marketing and invest in strengthening the team. The company is keeping North America as the target market space.