Empowering people is my dharma: Arundhati Bhattacharya of Salesforce 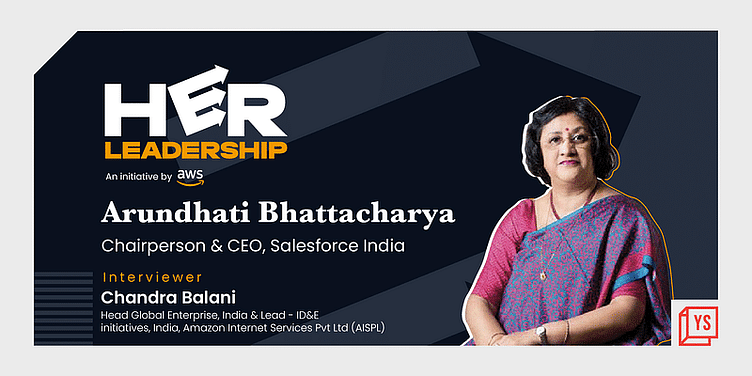 The banking boss shares what it means to be an influential leader, lessons from her childhood, digital transformation, diversity and inclusion, and more.

From being the first woman to chair the 210-year-old State Bank of India, to being among the board of directors of companies such as Wipro and Reliance, to now heading a SaaS behemoth, Arundhati Bhattacharya, Chairperson and CEO of Salesforce India, has influenced generations. A veteran state banker and leader with more than four decades of experience, Arundhati is an author, a role model, and a global influencer.

Speaking with YourStory at the opening episode of the HER Leadership series, Arundhati shares her insights on empathetic leadership, value of empowering people especially women, essence of diversity and inclusion, and more. Powered by AWS, the conversation was steered by Chandra Balani, Head Global Enterprise India & Lead - ID&E initiatives, India, AISPL. HER Leadership puts the spotlight on some of the most successful and prominent enterprise business leaders in India.

Empower yourself and others

Equating her ‘dharma’ [moral duty] to empowering people, Arundhati wants people to realise and achieve their full potential. “Being powerful is having the ability to empower others. The more you empower others, the more powerful you actually are,” Arundhati tells YourStory, explaining her interpretation of being among the most powerful business leaders in the world and being featured on multiple power lists throughout her career.

Arundhati’s deep passion for creating a positive impact and being a role model comes from her strong upbringing. Her growing up years have been greatly influenced by her mother and aunt who were strong, self-made women. “My mother used to tell me that it is very important to build an identity for yourself. She told me that you are not just somebody’s daughter, mother, wife, etc. You are yourself,” she says, highlighting how her mother always emphasised on never developing a victim syndrome ever. Arundhati stresses that it is important to look within and learn from failures and challenges.

“My mother also ingrained in me the importance of speaking up when you are faced with an unpleasant or uncomfortable situation,” she adds.

Through her work and the position she has gained over the years, Arundhati wants to be a voice for thousands of people, especially women. She feels that women often have “divided loyalties” and worry that they aren’t fully ready for a job. “The only way to get past these moments of self doubt is to go ahead with the notion of ‘I can do it’ and ‘I will do it’,” she quips.

Boasting an illustrious career spanning across 40+ years, six companies, and generations, Arundhati highlights important lessons that have helped her and should be followed by professionals and organisations at large for sustainable growth.

Explaining that diversity is broader than gender, she mentions that people should become conscious about unconscious bias and avoid stereotyping people without knowing or working with them.

“We need to increase the empathy quotient and it’s important to align personal and organisational aspirations,” adds Arundhati, highlighting that organisations need to be well-versed with the aspects of diversity and inclusion.

Expanding the importance of understanding empathy, she speaks about moving beyond oneself and thinking about humanity and global interests. “It bothers me that people have narrow interests and are very focused on just their immediate environment,” she says.

In her quest of inspiring more and more people to think beyond just their needs and goals, Arundhati also talks about people and moments that have inspired her in her journey so far. “Getting the Chairman’s position at SBI and becoming the first woman to do so is genuinely unforgettable. Another moment I truly savoured was receiving a medal from President Pranab Mukherjee (during his tenure) for integrating the maximum number of differently-abled people into fully serving roles at SBI,” she adds.

Spearheading the digital transformation at SBI

“I realised very early on, during my banking days, that in a country like India, only digital technology can enable you to deliver [products and services] to millions of people,” says Arundhati, recalling the time when she had to explain to her team that how digital transformation goes beyond just providing internet banking services.

Learning about cutting-edge tech solutions and everyday tech-enabled jobs during the pandemic, she says, “In earlier meetings, I noticed how people used a lot of acronyms and I was left wondering about their full forms. One day, at the risk of sounding stupid, I asked a colleague and even he was unaware,” she laughs, adding that it’s exciting to learn the new languages and functions of the IT industry.

Despite being a trailblazer herself, Arundhati seeks motivation from people who have battled against all odds to emerge victorious, small entrepreneurs, especially women, who have been breaking the glass ceiling. “I get inspired by people who have had humble beginnings. I remember the story of this woman who started a saree business by getting six plain sarees from a local saree shop and reselling them after painting them herself. It later became a business with a turnover of Rs 1 crore a month and today she employs more women like her,” she reminisces.