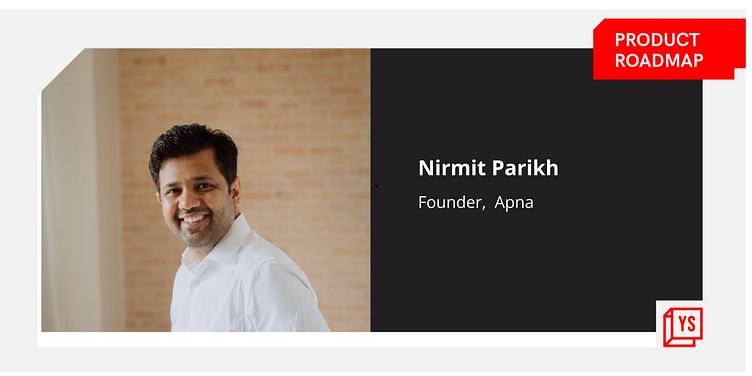 In this week’s Product Roadmap, we feature Apna, a job platform for the blue-collared workforce.

In 2019, serial entrepreneur Nirmit Parikh decided to pose as an electrician and floor manager to understand the problems faced by the blue-collar workers in India.

Nirmit had heard his friends and family talk about the cumbersome process of hiring the rising working class in India. It was a puzzling yet intriguing problem statement for Nirmit, who wondered how there could be a shortage of workers in a country like India, where millions of people were always on the lookout for jobs.

From his undercover stint as an electrician and plumber in his hometown Ahmedabad, Nirmit realised a couple of key issues that plague the informal job ecosystem in India - reliance on resumes, informal referral networks for hiring, and lack of a scalable tech infrastructure to connect workers with employers.

Close to 80 percent of informal jobs in India come from social aids and connections, leading to job opportunities being limited to people only in the know. With no scalable tech infrastructure in place to solve this issue, it was a clear to Nirmit that his idea was worth getting off the ground, and he launched ﻿Apna﻿ a job platform dedicated to blue-collared workers.

[Tech50] India’s youngest unicorn Apna is hungry for more, aims to go global by touching more than 2B users

Apna helps blue-collar job seekers by setting up simple profiles requiring basic demographic and education details. It then generates a virtual business card for them, and leverages its machine learning (ML)-powered job matching algorithm to find and showcase the most relevant job opportunities for the user.

A candidate who applies for a job on Apna is first put through a basic screening test, after which he/she can be hired by any verified employer on the platform. If a candidate fails this initial test, Apna upskills the person in 24 hours and then helps them reapply for the job.

This process ensures that candidates are able to secure job roles which are most suited to their interests and skills, while employers get the most qualified candidates in the shortest time possible.

“We believe long term career success needs an ongoing investment. Apna is targeting the twin problems of helping users build their professional networks and getting upskilled to find their next dream job,” says Karna Chokshi, Chief Operating Officer, Apna, in a conversation with YourStory.

He adds that Apna has over 70 vertical communities of interest, where groups for skilled professionals like electricians, carpenters, plumbers, beauticians, telecallers etc. can network with peers and learn from industry experts.

Explaining how they deal with the volume, Karna says, “We ship our products fast, learn from our users and iterate on to the next improved version. This has been codified into Apna’s DNA from Day 0. Our prototype was an Android app with basic UI which our team built in a matter of few days where users could apply to the initial set of jobs.”

He recalls how the founding team personally visited slum areas, NGOs and IT parks in Mumbai to nudge users to manually install the app on their phones (as they had not launched it on Play Store as yet), and observed their interaction with the app.

“For the first nine months of Apna’s existence, our lead founding team stayed and built together in an apartment in suburban Mumbai. We wanted a test market that would offer enough depth and diversity of roles in the informal job market, and Mumbai was the perfect fit!” says Karna.

This experience led to two critical learnings - importance of shorter feedback loops in product development and a willingness to listen to users. Within three months, the product team created over 30 versions of the mobile app, continuing to improve with each version.

“This extreme bias for action helped us cover a one-year journey in just a quarter. It also gave us innumerable valuable insights which we channeled into later product iterations, with a few of them becoming our key competitive moats. For instance, the immersive multilingual language experience on the app. User research and data insights showed us that users prefer to experience the app in a mix of English and their regional language. We cover all major official languages of India, and this has turned out to be a hit with our users,” explains Karna.

Any entrepreneur would tell you that to get from the minimum viable product (MVP) stage to product market fit (PMF), one needs as much actionable feedback as possible from customers / users. For Apna, this journey lasted three months. During its MVP phase, job interviews on the platform quadrupled every month. As job applications grew significantly, users started to demand peer to peer networking opportunities which led the team to launch a V0 version of community chat, which at the time was WhatsApp-styled group chats.

“To encode user feedback into our processes as we scale, we set up a user insights and success team, who kept our ear firmly to the ground, even when we were taking giant leaps on the product front,” adds Karna.

As the team crossed multiple inflection points in a short period, they grew over 100 percent month-on-month. But this is when scalability challenges began, and it was time for the next stage of evolution.

Apna’s community chat product quickly outgrew its group chat phase. They then transitioned to a news feed (similar to social media platforms) and 1:1 chat platform, which enabled richer and deeper learning conversations between peers and mentors.

In categories like telecaller, sales, marketing etc., which require a niche set of technical and soft skills, the team realised that a lot of job applications had started to happen organically. To ensure the best industry experience for these users, Apna enabled a tech-powered assessment layer, which ensured only a filtered list of candidates reached the employer in virtually no time. This also accentuated employer delight.

“With an increasing set of jobs on the platform (scaled 10X within a year), we also decided to move from a heuristics-based approach to a ML-driven approach with great results. We were also able to reduce our response times for generating the user-specific and relevant list of jobs by 70 percent,” says Karna.

User feedback continues to play a pivotal role at Apna. Today, the  user insights and success team comprises 50 members who interact with a thousand users daily to understand their delights and pain points, all of which is rapidly channeled back into the app via weekly feature releases.

“Apna’s career expert Isha has established herself as a guide in our users’ professional lives and shares relevant jobs and resolves 100,000+ career-related queries every day,” says Karna.

“With our shorter feedback loops, we had consistent learnings from the market. Some of these learnings were quite specific to the user base we were targeting while some were specific to our business model,” he adds.

Apps that run well on low bandwidth internet, consume less battery and are smaller in bite size are most popular with users of this demographic. “These critical insights have become a part of our tech DNA and every new feature decision the team makes has to pass this test before it gets considered for development,” says Karna.

Right from the beginning, Apna has been a highly data-driven company, maintaining an end-to-end data lake since Day 0.

The team strongly believes in democratising data access across the organisation, which has led them to find patterns in user behaviour, and understand the core of their requirements.

Despite being a product-first company, the team has kept its geographical scaling quite deliberate as they want to provide the best personalised user experience in a new city before they  launch the product in another city.

“Pre-launch, our business teams spend a lot of time analysing the job market in the city and onboard enough relevant employers and users to ensure a delightful experience for both sides. Once our business teams are ready with the launch plan, our idea is to increase our growth in those cities. To serve this purpose, we have codified unwritten knowledge on how to launch a new geography into live playbooks, and new city launches are now executed end-to-end in just one day. Our brand awareness (even in smaller cities) enables us to drive over 10,000+ interviews there within two days of launch,” says Karna.

Scaling the user base

Even when the user base scaled 100X+ in just a few months, the team soldiered on as they had already set up devops teams.

“We also moved from our legacy monolith code proactively to microservices architecture with a standardised tech stack to cope with expected scalability issues. Since we follow a rigorous weekly app release cycle, we have also automated our QA and testing mechanism to allow for quicker iterations.”

Karna elaborates, “One of the critical legacy systems that we had to let go of was our initial reliance on external vendors to support our targeted notifications system. Considering it was vital for us to communicate with our user base daily to help them find the right jobs, we decided to build our own notification system from scratch. Not only did it give us outsized returns in terms of reduced tech issues, but we can also now support 200 million + targeted notifications daily.”

The team has noticed users want to upskill themselves for a better tomorrow. Apart from learning and upskilling opportunities, the team wants to chart a skill-tech trajectory, which could be a combination of in-house curriculum and curation from existing creators and companies.

“We are striving to build an end-to-end solution that has the potential to help individuals over the course of their career and not just in a single job-search related interaction. We strongly believe that our skill-tech opportunity has the potential to become an independent, multibillion-dollar company,” claims Karna.

He adds, “While we are a 100 percent made in India product, we are building for the world. We are committed to discovery and creation of opportunities to a billion livelihoods, across geographies. As we continue to strengthen our leadership position in India, we have concrete plans to expand to international markets at the right time. There is tremendous scope by unlocking talent and opportunity for this user globally, which will also help usher in the age of ‘reverse brain drain’,” he concludes.