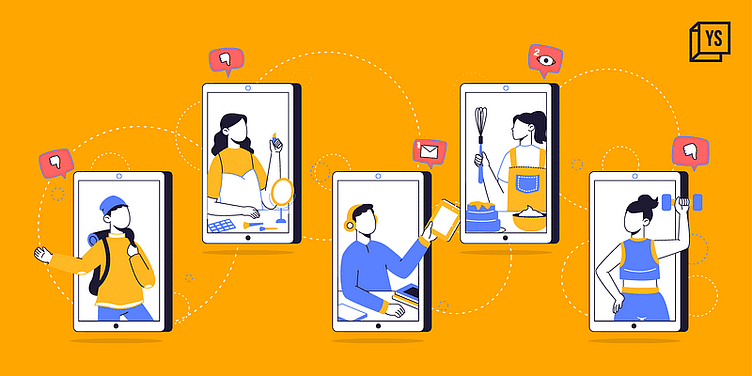 Both old and new crop of creators started posting short videos to gain followers during the pandemic. But in the post pandemic world, creators seem to have reduced their number of posts or quit creating videos altogether.

Zorawar Ahluwalia wanted to shift gears from his decade-long corporate stint to become a content creator in 2020. Inclined towards being a disc jockey (DJ) since his college days, Zorawar says the pandemic pushed him to finally take the plunge towards the end of 2020.

“I heard this quote somewhere--if not now, then when? And it really stuck with me,” Zorawar tells YourStory.

A former employee with alcohol-beverage giant Diageo, Zorawar dabbled with content creation for six months and then switched to doing that full time in 2021. With over 76,000 followers on Instagram, he says he makes much more money as a creator than he did in his corporate job.

As the pandemic accelerated the digital transformation of our society, consuming content through social media became a favourite pastime for people. It also gave a boost to the creator economy.

According to a report by Forbes, global online content consumption doubled in 2020 to nearly 7 hours daily.

The same year, Meta-owned Instagram shifted its focus from being a photo-sharing only app to allow users to build new experiences with its short video feature, ‘Reels’.

With TikTok and other Chinese apps banned in India just weeks earlier, Reels rapidly gained popularity, drawing in both viewers and creators. But constantly changing algorithms and the need to keep feeding posts to be on top of search results is leading to yet another wave of creator burnout.

“Do Reels as much as possible,” singer Armaan Malik told Film Companion when asked to advice creators to increase their reach. “Reels is blowing up and it will definitely bring a lot of people to your page,” said Armaan, who did song requests over Reels and has over 13 million followers on Instagram.

Tanmay Bhat on the potential of creator economy: Utility-driven creators will be able to extract more revenue

As first-time creators started going viral with their Reels, others, who were already popular, were hired by companies to reach new, wider audiences and sell their products.

Thirty-three-year-old Kusha Kapila’s Punjabi humour content not only got her multiple brand deals, but also be a judge for an online fashion show with designer Manish Malhotra, among other shows.

Before March 2020, the creator ecosystem in India was small due to low internet penetration and lack of digital marketing by brands.

For instance, Ashish, Kusha, and Tanmay started with YouTube as the Google-owned platform would share ad revenues with creators.

But YouTube is majorly used for long-form content, a 5-10-minute video. This means, creators have to invest more time, come up with ideas suitable for the format, and they need more budget to produce the video.

Whereas Reels are between 15-30 seconds, and production also does not necessarily need to be extravagant. All it needs is a clean background, good quality audio, ring light, and a stable internet connection.

As of now, India has around 80 million creators, according to Kalaari Capital. These include influencers, bloggers, video streamers, creators on streaming platforms, and essentially anyone building a community around their niche.

With short-format videos gaining traction, Shreyaa would post static posts as well as Reels at least 4-5 times a week. So did Zorawar.

Instagram creator Viraj Ghelani would also post funny videos on everyday life, sometimes even 2-3 in a day. “Jab bhi ideas aa jaate the toh video bana ke post kar deta tha,” (whenever I would get ideas, I would record videos and post them), he says.

It was a time when any video had a chance of going viral, says Shreyaa. But as the lockdown was lifted across the country, viewers got busy.

“People are spending a lot of time on social media because it is very addictive. But strangely, their attention span has become really short,” says Ishita Mangal, a fashion content creator.

Pushppal Singh, who has been a creator since 2016 with his wife under @that.couplethough, says, sometimes the engagement on short videos is as low as five seconds, and even on YouTube, it does not go beyond a few minutes.

Yamini Rameshh, who has more than 14,000 followers on Instagram, also had a similar experience. “During the pandemic, I was posting as much as I felt like and I do so even now. But even with a similar number of posts, my followers are dropping almost every quarter,” she says.

She point out that she posts content at a leisurely pace as content creation is more of a side hustle. "If I was to rely on this (content creation) as my only income source, I can imagine being stressed out due to moody algorithms, hoping my Reels to get organic visibility,” Yamini adds.

Creators also seem to be reaching a saturation point with Instagram consistently changing its algorithms.

As creators around the US, India, and China, among other countries, started increasing, Instagram made them the focal point of its growth and rolled out new features and made algorithm changes to support them.

From the chronological order of picture viewing, Instagram’s algorithm has now become much more sophisticated and customised for every user. For instance, if the algorithm thinks someone likes cats, k-pop, and travel content, the app will show you Reels and posts related to those topics. Another algo, which was updated in April 2022, would rank original content higher than reshares from other platforms.

The Meta-owned app also tinkers with TikTok-like features. One of them was rolled out in May 2022, where a Reel video would take up the entire screen space similar to TikTok. Another one would show content of creators a user doesn’t even follow, which created a huge backlash, with users pushing to return to the old chronological post viewing order.

“The platform will always try to stay ahead of you (a creator). They don’t want you to figure the platform out because they want you to keep using it as long as possible. The best way to stay ahead on Instagram is to use all of its features,” says Sonia Thomas, who has been a social media manager and consultant for over five years.

The need to keep feeding posts to be on top of search is resulting in burnout among creators.

“Constantly posting on Instagram gets to me a lot. Even if I am tired and want to take about 2-3 days off from social media, my reach drops,” says Vitasta Bhat, who creates content on lifestyle and fashion.

Veena Jain, a counseling psychologist and relationship coach with Jagruth and Indian Airforce, has treated at least three people who identified themselves as creators. “In one of the cases, there was a huge loss of self-worth. This person’s following and likes skyrocketed during the pandemic. But when the engagement and the following slowed down, it was very hard for them to stay motivated,” says Veena.

More than half a dozen creators YourStory spoke to say it is very hard to figure out Instagram’s algorithm. “If you keep thinking about algorithms, then you will lose your mind,” says Shreyaa, who takes a break every weekend. Even Zorawar takes breaks from time-to-time.

“I think creators have stopped worrying as much about how their engagement numbers pan out,” says Sonia. But Veena says there should be more conversations and education around handling the instant success creators get if they want to survive in this space for the long term.

Viraj and Shreyaa claim they post only about 2-4 times a week now, while Kareema Barry, who went viral for affluent aunty impressions, is also not very regular with posting original Reels.

The reduction in engagement and saturation has led to creators to find new avenues to monetise themselves.

While Viraj started selling his merchandise in 2019, and he is also in the process of hiring writers and editors, among others, to set up his own production house. The creator is also finding acting gigs.

Kareema, who recently graduated from Hindu College, has already starred in the latest season of Masaba Masaba.

Shreyaa is also focusing on creating videos on YouTube and expanding presence over LinkedIn, and macro creators, including Team Naach, Ranveer Allahbadia, who goes by BeerBicep, and Tanmay Bhat have usually had a monetisation channel outside of creating content.

“That high of only being an Instagram creator is gone. The engagement was high in the last two years because people were killing time. Now we have gone back to our normal lives. No one has as much time," says Aashish Maini, Founder of Silly Entertainment and Media Pvt. Ltd., a content production and creator management company.

"I know so many creators who are either taking breaks, seeking therapy, or have dropped out completely due to the pressure of constant creation,” he adds.

According to Aashish, only those who have something unique to offer through their content will find an audience.