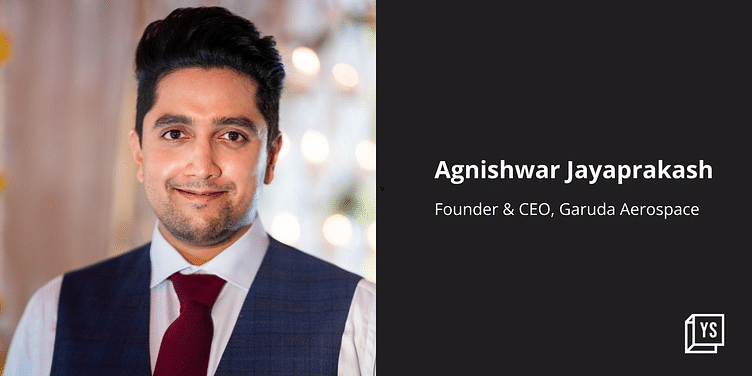 Chennai-based Garuda is one of the first Indian drone startups to partner with foreign aerospace firm Lockheed Martin on drone service solutions.

Under the given terms, Garuda Aerospace will provide drone hardware while Lockheed will provide the software infrastructure for defence and commercial purposes. The companies are also looking to expand upon the partnership and develop data processing capabilities and joint algorithm solutions in sectors as diverse as defence, agriculture, mining, large scale mapping, and industrial inspection.

Founded in 2015, Garuda has a dual focus on manufacturing drones at a large scale and building drones for the Indian agricultural and defence sectors. Earlier this year, the company sold 4,000 drones to Africa, and CEO Agnishwar Jayaprakash told YourStory that the company aims to build 6 Lakh drones by 2025.

Garuda was also the first company whose kisan drones were approved for subsidies upon purchase by MSME agri-drone service firms in July, with support from the public-backed Agri Infra Fund. From a defense perspective, the company was enlisted as the first private startup to provide drone-as-a-service (DaaS) support to the National Disaster Response Force (NDRF) last week.

In a first, Agri Infra Fund will facilitate loans to SMBs to buy startup drones

The company claims to be in the midst of raising $30 million, in a round that would value Garuda Aerospace at $250 million. If the round closes at those numbers, it would make the company the highest valued drone startup in India, and put them well on their way to Agnishwar's dream of becoming India's first drone unicorn within a couple of years.