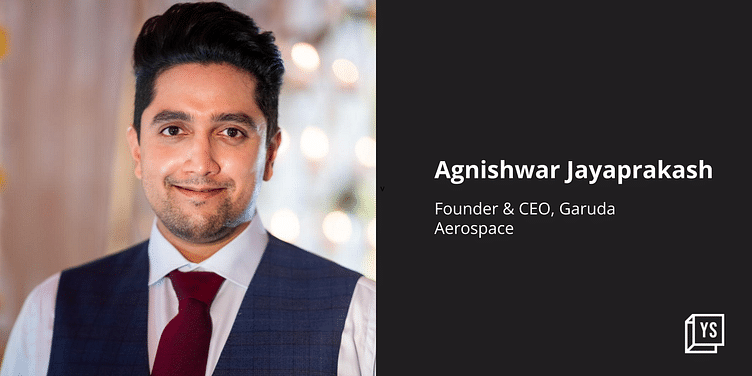 With the acquired funds, Garuda Aerospace said it will focus on building advanced drone solutions for the Indian Armed Forces in collaboration with global giants from the defence and aerospace sectors.

Chennai-based drone startup ﻿Garuda Aerospace﻿ has secured $5 million in funding from a large infra development company, a group of HNI and angel investors from India, the UAE, and Singapore.

With the new capital, Garuda Aerospace plans to focus on building advanced drone solutions for the Indian Armed Forces, in collaboration with global giants from the defence and aerospace sectors.

Jyotiraditya Scindia, Union Minister of Civil Aviation of India, recently tweeted and encouraged Garuda Aerospace for their developments and the importance of drones used in the agricultural sector. The company, which operates in the agri drone and industry 4.0 services segment, has demonstrated the use of drones to farmers for surveillance of crops, mapping of land, crop health, and crop yield mitigation. It said it continues to create awareness of the importance of drone usage across India.

Speaking on the funding round, Agnishwar Jayaprakash, Founder and CEO, Garuda Aerospace, said,

“Since the Prime Minister flagged off the Kisan drones yatra, Garuda Aerospace has been consistent in bagging orders and growing the team, adding to our overall growth and revenue. We are motivated by the acknowledgement received by Shri Jyotiraditya Scindia’s tweet for creating an impact in the agri-drone sector. Garuda Aerospace is an asset-light, recession-proof, and market-agnostic company that is backed by its consumers.”

“At a time when other unicorn startups are downsizing, Garuda is hiring because growth is based on profitability, sustainability and revenues. We have a stellar order book in contracts with three years of exclusivity, thus being cash-positive. We have a 24% net profit margin. Our ESG footprint has grabbed the attention of several large-impact investment firms. Given all of this, Garuda Aerospace is currently the most valuable Indian drone company at $250 million,” added Agnishwar.

Garuda Aerospace claims to have inked long-term partnerships with Lockheed Martin, Elbit Systems, Indian Institute of Science, IIT-M, and MIT Boston. It currently boasts a drone fleet of 400 drones and a growing team of more than 500 pilots across 26 different cities.

Former Indian cricket team captain Mahendra Singh Dhoni has invested and is also the brand ambassador of the company. He recently launched a drone named Droni manufactured by Garuda Aerospace.