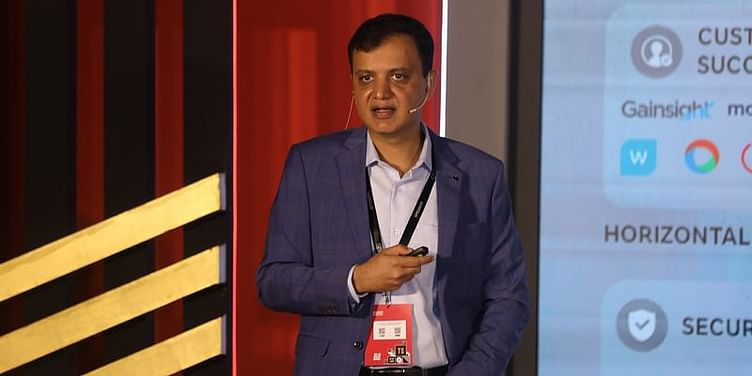 Sunil Gopinath, CEO, Rakuten India shares tips about how to build your GTM with a laser-sharp focus on the customer, at a keynote at TechSparks 2022, India’s most influential startup-tech event.

In an era where consumers are spoilt for choice, businesses need a go-to-market (GTM) strategy that cuts through the clutter, especially when it comes to SaaS.

Rakuten India is the largest among Rakuten’s nine technology hubs outside Japan. It has been an important tech hub for developing solutions for Rakuten’s global ecosystem of more than 70 diverse businesses and 1.6 billion members, serving users worldwide through businesses based in 30 countries and regions.

As the Rakuten Group leverages its expertise and expands into B2B technology products, Sunil Gopinath, CEO, Rakuten India spoke about how to build your GTM with a laser-sharp focus on the customer, at a keynote at TechSparks 2022, India’s most influential startup-tech event.

Drawing from Rakuten’s global ecosystem of more than 1.6 billion members, Sunil spoke about one of its flagship products for ecommerce players - Rakuten Senjutsu, designed to help brands stay competitive with SaaS.

“If you’re an ecommerce company of any kind, from any geography, having a competitive intelligence platform that feeds you strategic intelligence on the breath, pricing, quality and other factors on your platform vis-a-vis your competitors, can be a powerful edge in a competitive market,” he said.

Rakuten Senjutsu, which is now available as a SaaS product works agnostic of business verticals, and can help ecommerce players with closing the product and price gaps, AI-based product matching engine, insights into brands, merchants and campaigns from competition, bridging online offline purchase flows, and more. “Having a ready-made go-to tool like this can add enormous value especially for a new ecommerce player,” he added.

Leveraging the power of data and AI

Sunil also spoke about how Rakuten Knowledge Graph can help brands leverage the power of data and AI for contextual recognition of customer needs, purchase decisions, customer loyalty and expansion, among other things.

Having distilled the insights from Rakuten’s 70+ global businesses, 50,000+ merchants, 360 million products and items and 100+ million customers on a daily basis, Rakuten Knowledge Graph can be yet another key enabler for ecommerce players.

“The product knowledge graph is non-negotiable in the ecommerce space, and the Rakuten Knowledge Graph is built to help with identifying various brand synergies. These include intelligence on which brand(s) of shoes a user is more likely to buy depending on their previous purchases, forecasting consumer’s design and colour preferences with cross-category compatibility forecasting, and much more,” he said.

Mobile networks to date have been dependent on dedicated hardware. Rakuten Mobile has taken a different approach, utilising virtualisation technologies to disaggregate network hardware and software. The network runs on general purpose hardware, which has enabled dramatic cost reductions.

Traditional outdoor base stations feature a large number of components. By moving the radio access functions to data centres, Rakuten Mobile has been able to simplify and reduce the footprint of its base stations. This allows for greater freedom and flexibility in deployment and significantly reduces construction and operations costs.

“One of the unique features of Rakuten data is that we have purchasers’ data. Who buys a certain product is information that’s more credible than other marketing insights,” he said.

“Customer DNA can not only provide the list of purchasers in Rakuten, but it will also come up with the list of users who are similar, hence likely to buy the product. The intelligent target prospecting component on the tool ensures that the right set of customers are contacted with the right content and at the right time,” he added.

The prescription for healthy infra

Each of Rakuten's 70+ businesses has a minimum of 1,000 microservices each running at any given point of time producing 100s of petabytes of data on a weekly basis.

Rakuten's application process monitoring tool helps businesses gain a 360-degree view of their applications with Site24x7 APM. It also enables them to achieve end-to-end observability by tracking key application performance metrics to monitor and optimise the performance of your application in real-time with a scalable, AI-powered, full-stack monitoring solution.

“All of this comes with full transparency of what AI is doing in the backend with a cognitive machine that facilitates validation as customers help the ML algo learn,” he said.

“The tool also has forecasting capabilities for better preparedness in terms of reducing losses that have occurred in the past due to unknown unknowns, and segregating the bad anomalies from the expected ones. All this, in a system that’s proactive, reactive and auto-healing,” he added.