From India setting the global EV agenda to teaching kids about money: A recap of Day 1 at TechSparks 2022 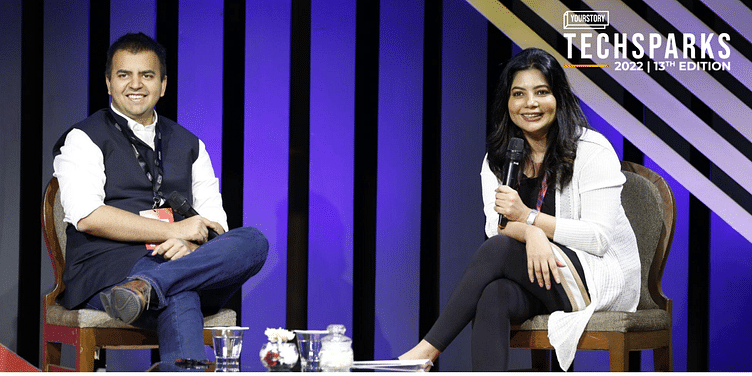 Here's a quick look at everything that happened on Day 1 at TechSparks 2022, back for its 13th year in an offline avatar. Today's star-studded lineup included Zerodha's Nithin Kamath, Ola's Bhavish Aggarwal, OPEN's Mabel Chacko, and OYO's Ritesh Agarwal, among other prominent personalities.

"Sabka time aayega," began YourStory's CEO and Founder, Shradha Sharma, flagging off the 13th edition of TechSparks 2022, adding "no one can take away from what you're due" in an inspiring opening note that set the tone for the day.

Since 2010, TechSparks has been the go-to place to discover the startups, entrepreneurs, and innovations set to shape the future of everything. This year’s theme is “Building On India’s Tech Agenda”, and it brings together architects and early adopters across the innovation ecosystem of the country.

From cutting-edge technologies to audacious ideas, from path-breaking disruptions to deep humane conversations, TechSparks 2022 is the destination for deliberating, deep-diving, and understanding the promise of India’s tech agenda.

In the first of many introspective discussions of the day, ﻿Zerodha﻿'s Nithin Kamath talked money--something he's best known for in the financial technology space. Nithin said while he does not eschew making money and creating wealth, he does believe too much money can complicate things, especially for startups.

Stop overselling to investors, it's a treadmill, says Nithin Kamath to founders

"Taking money from someone to build a business is an obligation, and not money that you made. For us, valuation is just money in the bank."

Nithin cautioned that it has now become much harder for startups to raise money mostly because private market corrections have set in. However, this is a good correction because it brings resilience to the ecosystem, he added.

Next, ﻿Ola﻿'s Bhavish Aggarwal, who has attended TechSparks five times now and calls himself a "TechSparks veteran and fanboy", took to the stage to talk about his electric vehicle dream for India, saying the US no longer sets the agenda for the EV market, but India has the potential to.

He recalls that when he set out to build Ola Electric in 2018, many had said it was “too early” to do so. Some had also asked him why he was in a hurry to build electric vehicles. But Bhavish being Bhavish did not think it was an idea conceived too soon.

Bhavish also spoke about safety at Ola, saying the company has built a culture of safety across the design, engineering, and customer stages, and that the one incident that happened with one of its scooters was in the spotlight because EVs are a new phenomenon.

Co-founder and CEO of ﻿Meesho﻿Vidit Aatrey spoke next about growth at the Bharat-focused ecommerce startup, saying he now wants to grow the business through advertising revenues from small and medium sellers on the platform.

“When we started out, we did not start as a zero commission platform,” Vidit said, adding that that strategy led to an increasingly higher number of sellers on the platform coming in from the fashion and accessories category, which commands the highest margin.

“When we met these businesses, they said the category made enough margin to pay commissions to the platform and to bear the shipping cost. We decided it did not work and removed commissions for sellers. That brought many unique small sellers and a lot of unique products onto the platform,” Vidit added.

Darpan Sanghvi, Founder and CEO of ﻿The Good Glamm Group﻿, spoke about the challenges of acquiring over 10 brands between August 2021 and March 2022, including seamless integration.

“The integration is a challenge that we have learnt to power through with time,” Darpan said. It also poses the risk of the group losing the core focus—creating one large brand with consumer-focused and complementary businesses, he added.

He also noted that companies implementing this model must be mindful of the end goal while ensuring that each business offers value to other companies.

For The Good Glamm Group, it was “innocent optimism” that helped it maintain a synergy between different companies under one roof and change the way the beauty business operates in India, Darpan said.

Influencers Bhuvan Bam and Ankur Warikoo then spoke about their lives and how social media has evolved since they started out.

Bhuvan said he thinks today it's not a creator-based universe anymore, but one based on algorithms. He added that social media is a hit-or-a-miss game, and that the only way to remain sane is by doing whatever you want at your own pace.

"The end goal is to stay true to the stories," he said.

Ankur Warikoo, during his session, confessed that he'd made several mistakes during his entrepreneurial journey and got caught in the hustle of it all—chasing growth while ignoring profitability—all while entering a cocoon of his own.

Recalling his days as the founder of Nearbuy, a hyperlocal experience discovery platform, Ankur shared an anecdote about bagging a $17-million cheque from Sequoia. "In my head, it was lower than what we should have raised," he said.

In a panel discussion titled, 'Making The Startup Playground Equal', Mabel Chacko, Co-founder and COO of Open Technologies, and Priyanka Gill, Co-founder of The Good Glamm Group, spoke about tackling self-doubt, work-life balance, and how to change the equation.

“We keep second-guessing whether we are the right people to do (something important)," Mabel said, adding, "It’s heartening that things have been changing over the past few years."

Priyanka said these issues were systemic and needed to be addressed at a grassroots level.

“If you look at a Class XI classroom, how many girls pick up STEM subjects like mathematics or the sciences. That’s where a lot of our tech entrepreneurs come from. Are fathers in family businesses talking to their daughters at the dinner table? I think women do not have the same access to the networks men have,” she said.

A multi-pronged approach should be used to attract more women entrepreneurs including getting more women in the fields of science and business. “Signalling really matters. Until there is equality, we need to make an outsized effort," Priyanka noted.

Another important highlight of TechSparks 2022 was the unveiling of this year’s Tech30—a specially curated list of India’s 30 most promising startups. Earlier winners include Freshworks﻿, Chargebee﻿, and Innovaccer that now rank among India's biggest tech companies with a global footprint.

The 30 most promising Indian startups of 2022

Later in the evening, Tony Fadell, co-creater of the iPhone and creator of the iPad, addressed the gathering virtually. On the iconic iPod that was discontinued in May, Tony appeared unperturbed: “The iPod, it may be gone, but it will never be forgotten, because Apple... it won’t be the Apple of today without the iPod."

Tomorrow, we have a heady lineup of the startup ecosystem's who's-who, including edtech founder Byju Raveendran, followed by Dunzo's Kabeer Biswas, and Snapdeal CEO and investor Kunal Bahl.