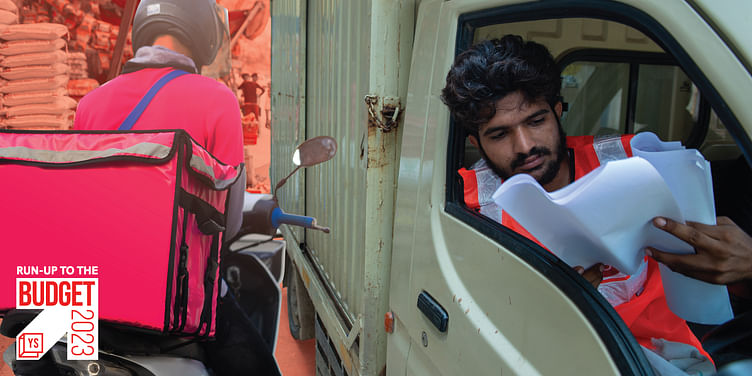 Stakeholders in the gig economy hope for social security cover, regulatory intervention for minimum wages, upskilling, and documented contracts for the workforce from the Union Budget for 2023-24.

As the gig economy expands, the concerns of its rapidly growing workforce must be addressed. Stakeholders expect the upcoming Union Budget to deliver on four major aspects—social security, minimum wage, tax relief, and upskilling, to help formalise this large but informal workforce.

“A set of clear and supportive frameworks for gig and blue and grey-collar workers is imperative to help formalise this informal workforce as they play a vital role in the success of our economy,” says Ajay Kumar Singh, Chief Business Officer, Billion Careers, a Quess subsidiary and a job portal for gig and blue-grey collar jobs.

Many gig jobs and blue- and grey-collar jobs in India do not provide proper statutory benefits, provident fund accounts, and a safe working environment for workers. Workers are also deprived of employee benefits and growth opportunities and face challenges such as payment volatility, which furthers economic inequality.

The budget must address these issues, say industry observers. It should focus on schemes that encourage MSMEs and enterprises that employ gig workers and implement social security programmes that provide access to healthcare and retirement benefits.

“The government should consider the writ petition filed by the Indian Federation of App-based Transport Workers in September 2021," urges Ajay.

"The government should also work on the implementation of labour codes state-wide,” he says.

As the gig economy witnesses growth, it is critical to have policies like soft loans for gig workers (educational and housing loans) depending on the minimum tenure they work for a particular company, suggests Visakh Sasikumar, CEO and Co-founder ﻿Fyn Mobility﻿, a vertically integrated EV-as-a-Service platform for last-mile logistics and commute applications.

Since the gig economy is a relatively new concept, the rules governing gig workers are not fully developed and they are not entitled to various benefits (minimum wages, insurance, fixed number of paid leaves, etc) that traditional employees are.

"This stratum of blue-collared workers suffers all the more on account of the lack of such provisions/safety net,” says Tamanna Gupta, Virtual CMO and Founder of ﻿Umanshi Marketing﻿.

“It would be great to have the gig economy workers under the Minimum Wages Act to provide them with their rightful compensation for their labour,” she recommends.

Given that most businesses prefer to hire tech-savvy employees, Union Budget 2023 should place emphasis on the upskilling of gig workers, most of whom are young, say stakeholders.

Youth participation in the gig economy of India has seen an eight-fold increase between 2019 and 2022, according to a report by gig work platform Taskmo. A majority of the youth opting for gig job roles belong to Tier I cities such as Bengaluru, Delhi, Mumbai, Hyderabad, and Chennai, and they would greatly benefit from upskilling initiatives.

“By investing in the grey-collar remote workforce, India has the potential to create new jobs, generate more income for low-income households, and provide financial security to those contracted in the gig economy,” says Rajesh Bernard, Co-founder and CEO of ﻿VOIZ﻿, a marketplace for gig work professionals.

According to Pravin Agarwala, Co-founder and Group CEO, ﻿Betterplace﻿, a technology platform for blue-collar workforce management, provisions need to be made for private firms to be part of the government's digital infrastructure such as the Pradhan Mantri Kaushal Vikas Yojana and NREGASoft, a local language enabled workflow-based e-governance system, to help formalise and gainfully employ a large pool of frontline workers in India.

“A good 20% of the CSR funds should be dedicated towards setting up of skilling and skill initiatives, which will further allow the gig workers to grow as individuals and capture more and better work opportunities for themselves,” he says.

In addition to the above measures, tax incentives, grants and special status to gig workers would greatly benefit the gig economy, say experts.

Providing relief on sales and service tax would boost the confidence of smaller organisations, and they will subsequently invest in hiring more people, says Ajay.

“To better the gig workers' wellbeing and further steer the economy, income below Rs 10 lakh should be made tax-free,” opines Pravin. “The 2023 Union Budget should also focus on tax benefits for enterprises, for going to a minimum wage structure. Incentivising enterprises to go to this structure might do the trick,” he adds.

Gig could be the future

Last year saw trends such as the great resignation, moonlighting, and layoffs steering the job market towards flexible hiring and work policies. This led to the gig economy gaining impetus in the country, and the momentum is expected to continue in the coming year.

Startups are playing a huge role in the unprecedented rise of gig economy workers, such as food delivery personnel and cab drivers, who are essential to the ecosystem’s operations, especially in developing nations.

Participation in the gig economy is higher in developing countries (5-12%) compared to developed economies (1-4%), according to research by Boston Consulting Group. Most of the gig workers are employed in lower-income jobs such as deliveries, ridesharing, and wellness and care.

Going forward, with labour reforms and formalisation of the gig workforce, the gig model could take over traditional forms of employment. The Union Budget must take note of this and push for the gig economy's social protection and provide requisite safety nets.