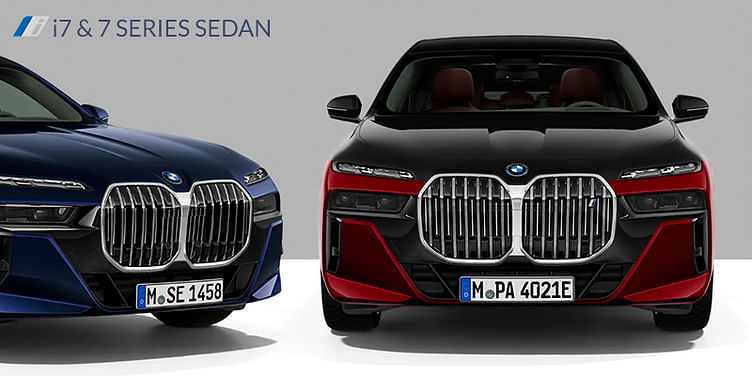 Based on a heavily revised version of the CLAR architecture, the new BMW 7 Series rivals Audi A8L and Mercedes Benz S-Class, and the all-electric i7 takes on Mercedes Benz EQS.

Offered in a single, fully-loaded 740i variant, the new 7 Series is now available as a petrol-powered limousine only. Its all-electric sibling is also offered in a single i7 xDrive 60 trim. Deliveries of both these models, which made their global debut in April last year, are expected to commence from March 2023 onwards.

The new 2023 7 Series wears a more radical exterior design as compared to its predecessor, flaunting a larger kidney grille upfront flanked by a split LED headlamp setup with a flat bumper, lending the car a more aggressive stance. An illuminated lighting element surrounding the kidney grille adds to appeal.

On the sides, the clean and understated look goes well with the sedan’s proportions while a prominent shoulder line runs through the length of the vehicle. It now features flush-fitted door handles with an internal touchpad and electronic mechanism, replacing the traditional handles. The new 7 Series rolls on 19-inch five-spoke, dual-tone alloy wheels with the option to upgrade to 22-inch units.

At the back, the horizontal taillights are sleeker than the outgoing model, while the bumper has been reprofiled too. Flaunting BMW’s new design philosophy, which made its debut in the facelifted X7 SUV, the new 7 Series retains the traditional three-box sedan design. The all-electric i7 is identical to its petrol-powered sibling barring a few EV-specific blue elements on the bumpers and side skirts seen in the former.

Inside the cabin, the new-gen 7 Series is a complete overhaul from the outgoing model. It features a layered-dashboard layout hosting a new central touchscreen display and digital instrument cluster in a free-standing single-piece curved unit while the centre console houses new touch-sensitive controls. The control panel also gets a gear selector and a traditional rotary iDrive controller.

The limousine benefits from a long list of creature comforts. Some of the prominent features on offer include a 12.3-inch digital instrument cluster, a 14.9-inch touchscreen infotainment unit, a 31.3-inch theatre screen mounted on the roof for rear seat occupants, 5.5-inch touchscreens on rear door pads, a panoramic sunroof with LED lighting elements, ambient lighting, and soft closing doors.

Onboard entertainment can be accessed via Amazon Fire TV in 16:9, 21:9, and 32:9 formats. Complementing this is a Bowers and Wilkins surround sound system. Safety is assured thanks to six airbags, a rear-view camera, parking assist, and ADAS features, including blind spot monitoring, lane departure assist, and front collision warning.

Under the hood, the new BMW 7 Series features a 3.0-litre, inline six-cylinder turbocharged petrol engine paired with an eight-speed automatic gearbox as standard. This motor now comes with a mild-hybrid tech and dishes out 376 bhp and 520 Nm of peak torque. The big luxury saloon is no slouch in terms of performance as it can sprint 0-100 kmph in just 5.4 seconds and clock a top speed of 250 kmph.

On the other hand, the all-electric i7 is powered by a twin-motor setup driving all-four wheels and deriving energy from a 101.7kWh battery pack. This powertrain pumps out a peak output of 537 bhp and 735 Nm of torque. It claims a maximum range of 625 km, as per the WLTP cycle.

As for performance, the i7 can accelerate to 100 kmph from a standstill in a meagre 4.7 seconds and has an electronically limited top speed of 239 kmph. BMW is offering the option of two AC wall box chargers–11kW and 22kW that can fully charge the battery in 10.5 hours and 5 hours, respectively. Using a 95kW DC fast charger, the battery can be replenished from 10-80% in just 34 minutes.