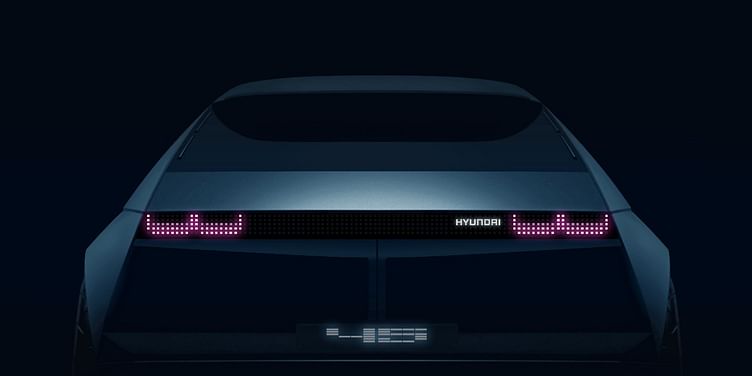 With the demand for electric cars being higher than ever, Hyundai comes up with its stunning new electric vehicle concept. Everything is unique about it including its name

Hyundai has released a teaser image of its new electric vehicle concept which will be released at Frankfurt Motor Show next month. The car is called『45』. Interestingly, it seems, the two brackets are part of the concept’s official name!

It was exactly 45 years ago that Hyundai’s first independently designed car was launched. Clear design cues from the 1975 fastback (Hyundai Pony) are clearly visible. The solid, sharp lines are continued. As per Hyundai, the new concept showcases the 'forward-driven design direction'.

Besides that, the concept explores the evolution of Hyundai’s ‘Sensuous Sportiness’ design language. Further, the teaser highlights the enhanced emotional values that customers can experience through design. Also ‘Sportiness’ is determined to implement those values through new and future ready mobility solutions.

The tail lamp of the new Hyundai electric car’s concept flaunts 'old school dot-matrix type layout'. Alongside the concept, the South Korean auto-maker will also showcase its vehicle connectivity concept at the Frankfurt Motor Show on September 10, 2019. Christened as Style Set Free, this technology will make its premiere in the new Hyundai Grand i10 (global version).

Hyundai retails its products across 200 countries. The car-maker employees 1.1 lakh people globally and its annual sales in 2018 stood at 4.5 million vehicles. Also, Hyundai launched its first all-electric product in India earlier in July 2019. The Hyundai Kona has a range of 452 km (ARAI certified) on a full charge. Besides that, the company claims Hyundai Kona’s running cost are as low as 1/5th of an internal combustion engine.