Porsche rolls out its fastest 911 with the GT3 RS 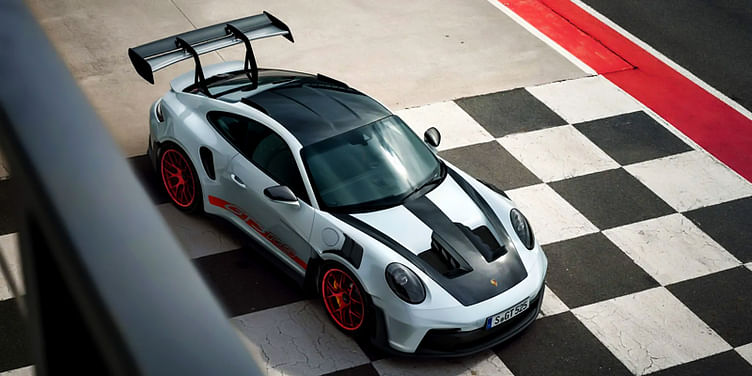 The new Porsche GT3 RS’ biggest visual highlight is its rear wing, which is higher than the car’s roof and also acts as an air brake

Porsche has unlocked its fastest car for the road in the form of the 911 GT3 RS.

Following its maiden global appearance through a worldwide digital premiere, the German marque added the sports car to its India lineup at a whopping Rs 3.25 crore (ex-showroom).

The latest iteration of the 992 generation GT3 is by far the fastest and most track-focussed 911 ever built, armed with a host of mechanical and aerodynamic upgrades.

Despite cosmetic updates, the 992 GT3 RS is an unmistakable Porsche 911 and shares a lot with its motorsport sibling the 911 GT3 R.

Porsche GT3 RS gets a superior aerodynamic package over the standard 911 GT3. The most significant is the central radiator that made its debut in the Le Mans class-winning 911 RSR and subsequently, in the 911 GT3 R.

The large angled radiator in the car’s nose– which previously offered luggage space, replaces the three-radiator layout seen in earlier models and allows for more active aero elements in the front bumper.

The car’s swan-neck-supported is a major design upgrade, larger in all dimensions, and has two parts— the fixed main wing and an upper, hydraulically adjustable wing.

Similar to Formula 1 cars, the latter acts as an active element for the drag reduction system (DRS). For the unversed, DRS allows the wings to be flattened out at the push of a button within a specific operating range.

Porsche has also added small fins on the roof to direct air outwards, ensuring cooler intake temperatures in the rear. Moreover, the side blades behind its air intake ensure the air is directed to the side of the vehicle.

These adjustable wing elements, along with other aerodynamic measures, provide a total downforce of 409 kg at 200 kmph and 860 kg at 285 kmph— almost twice as much as its predecessor and thrice the regular 911 GT3.

Its other notable exterior highlights include a new aggressive rear diffuser and carbon fibre doors that seamlessly matches the car’s front end, without interrupting the ventilation behind the front wheels. The new GT3 RS also gets a wider track thanks to much wider wheels, compared to the standard model.

Ensuring the suspension setup of its GT3 RS is in sync with the car’s overall aesthetics, Porsche has used a double-wishbone front axle with teardrop-shaped profiles and a multi-link setup at the rear with rear-axle steering.

The electronically adjustable suspension setup can be tweaked on the go which means rebound and compression of the front and rear units can be adjusted via switches in the driver’s cockpit.

As with all performance cars, the suspension has been kept on a stiffer side. Although the stiffness can be adjusted according to the driver’s preferences. Additionally, the rear differential can also be adjusted via a rotary dial on the steering wheel.

Complementing the hardware is a high-revving 4.0-litre six-cylinder naturally aspirated boxer engine with a slight bump in output.

The motor dishes out a mammoth 520 bhp and 465 Nm of peak torque while mated to a 7-speed Porsche Doppelkupplung (PKD) automatic transmission. The 15 bhp bump in power output is a result of new camshafts with modified cam profiles.

Porsche has shortened the gear ratios as compared to the standard GT3, enabling the car to hit 100 kmph from a standstill in just 3.2 seconds.

In Porsche 911 GT3 RS, stopping power is achieved from a six-piston 408mm disc up front and a four-piston 380mm disc at the rear.

The German performance marque is also offering a 410mm front disc and a 390mm rear disc made of composite ceramics as an option.

Porsche is offering two styling packages– Clubsport and Weissach. The former gets a roll cage as standard, making the drive safer.

Enthusiasts, who want to extract more out of their car by shaving off an extra eight kilos, can opt for the Weissach package at an additional cost.

Moreover, parts like the front lid, roof, rear wing and the upper shell of the exterior mirrors feature a carbon-weave finish in this accessory package.

The new GT3 RS is well-loaded with features, including a multi-functional steering wheel, a large central touchscreen infotainment unit, a digital instrument cluster and a pair of carbon-fibre bucket seats.

Its driver’s display is the same as the one offered in the regular GT3 but gets RS-specific graphics and two digital consoles flanking the analogue tachometer at the centre.

(Images and video courtesy of Porsche.)