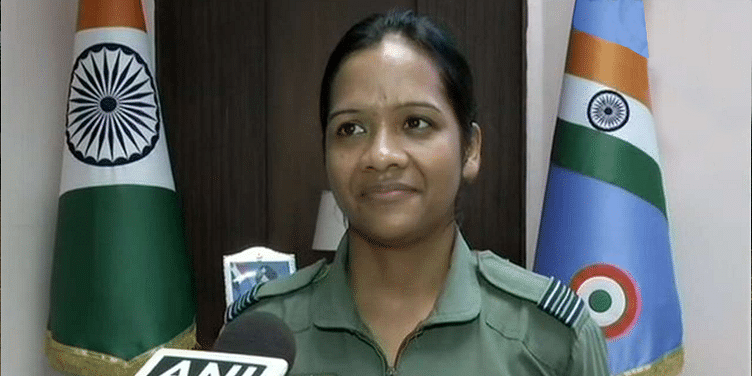 Indian Air Force Squadron Leader Minty Agarwal was part of seven fighter controller team on the morning of February 27. She guided the IAF's interception package which was launched to stop Pakistan's fighter jets.

For her service, Agarwal was awarded the Yudh Seva Medal on August 15. The Medal is awarded to recognise distinguished service of a high order during war, conflict, or hostilities. She is also the first woman to receive this honour.

While Squadron Leader Minty Agarwal has scaled heights with her service and accomplishments, women were only very recently allowed to take up combat positions in the Indian Air Force. The Government of India approved the induction of women fighter pilots in the IAF just four years ago, in October 2015.

Agarwal had alerted the IAF teams after she spotted a large package of Pakistani Air Force planes heading towards Nowshera area of Jammu and Kashmir on February 27, a day after India carried out Balakot strikes.

Speaking to ANI, she said,

"I participated in both the missions on 26th February as well as on 27th February. Wing Commander Abhinandan was in a two way communication with me when he was on air.”

The Squadron Leader said that she was the one providing Abhinandan with information about the air situation picture, ever since he was airborne. Agarwal had instructed Wing Commander Abhinandan Varthaman to turn back and return on February 27, but he could not hear her because the communication system was jammed.

“The F-16 was taken down by Wing Commander Abhinandan. That was a situation of intense battle. We saw the fading of F-16 blip from our screen,” she added.

Wing Commander Abhinandan Varthaman was awarded the Vir Chakra, which recognises acts of gallantry in the presence of the enemy, whether on land or at sea or in the air.

Along with Squadron Leader Minty Agarwal, others in the IAF were also awarded the Yudh Seva Medal as well as the Vayu Sena Medal. The IAF received a total of 13 awards.