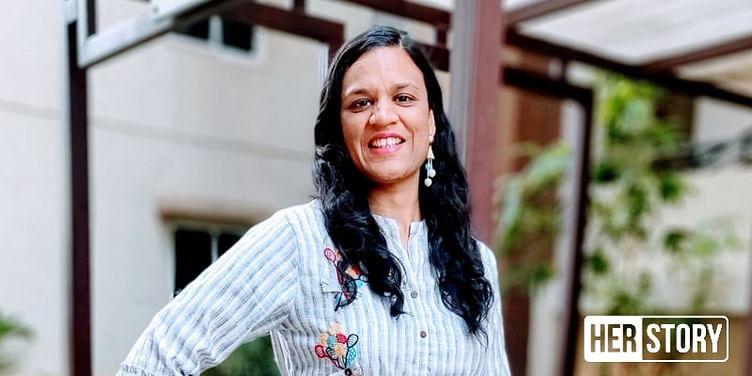 Hyderabad-based entrepreneur Anupama Dalmia quit her well-paying job at Infosys to establish three startups, and inspire girls and women. She is also the author of a bestselling e-novella, and is working on three more.

Success depends on a number of factors, chief among them being the right kind of support and encouragement one receives from family.

While Anupama Dalmia’s extended family was extremely patriarchal in nature, her parents believed in their children’s right to lead independent lives, dream big, and succeed on their own terms.

With engineering and MBA degrees, she secured a well-paying job at Infosys in 2006. However, she quit her job to pursue her passion for creativity. Today at 37, Anupama is a serial entrepreneur with three bootstrapped startups: Rhythms & Beats, Tingle Your Taste Buds, and Beyond the Box.

Speaking to HerStory, Anupama shares her journey as an entrepreneur, what keeps her motivated, and her dreams for the future.

When Anupama was born, her extended family mourned the birth of a daughter. Her parents were told not to spend too much money on her education because her fate was to get married and take care of her family. She says misogyny was all around her, with women not being encouraged to study, and having to learn how to cook just because they were women.

Fortunately for Anupama, her parents didn’t share the same mindset, and raised her without sexist restrictions.

She says, “I am fortunate that my parents knew better and raised my brother and me up equally. We didn’t have different rules. My mother tells me that the day I was born was the day she resolved that I would grow up to become successful and prove that it’s great to have a daughter.”

As life went by, Anupama pursued engineering and went on to graduate with an MBA degree, and in 2006, began working at Infosys. However, since she has always been creatively inclined, a corporate job wasn’t the right fit for her. She recalls,

“I was feeling the void of not doing something I’m really passionate about, so I decided to quit. It was a difficult decision because I was leaving a well-established job to start from scratch, and I wasn’t very sure of how I wanted to take things forward. But I just had to.”

How this woman entrepreneur from a Karnataka village is providing remote employment to youth fr...

Starting up in the Arts

After resigning in 2013, Anupama began conducting dance lessons. Trained in classical and western dance forms, she started small, teaching women and girls in her residential community. In 2017, she realised her venture was doing well and decided to establish it as a company. Named Rhythms & Beats, the startup conducts regular classes, workshops, and public events like dance relays and marathons.

While Anupama went after her own dreams, she realised her mother was passionate about cooking and had always wanted to make something of it. She soon started a small cookery page for her mother, and encouraged her to take it forward, teaching her the basics of social media and the internet.

The page, named Tingle Your Taste Buds, began gaining popularity, and the duo decided to turn it into a website in 2014. As its audience expanded, and the website began winning awards, Anupama decided to build a revenue model around it - earning from advertisements and collaborations. An original cookbook is also on its way into the mix.

Anupama’s third venture, and her personal favourite, is Beyond The Box. Launched in January this year, the startup takes online and offline classes for children and adults, in the field of creative writing.

As the author of bestselling e-novella Aarohi, and having her work featured in Muffled Moans, an international anthology about abuse, Anupama focuses most of her time and energy on this venture, helping students write better stories.

Through the startup, Anupama also recently conducted a contest - Write for Kindness - where she collaborated with Your Turn Now (YTN), a venture by author Rushabh Turakhia. The contest encouraged people to perform an act of kindness and write about it.

The startup is also working on an anthology with stories written by children, which is slated to be published soon.

“Through Beyond The Box, my intention is not just to make people write better, but also help them become more thoughtful individuals - especially with children. We focus a lot on their overall development, and that’s why I’m most passionate about this venture,” says Anupama.

Anupama admits that it is challenging to run three startups at the same time.

With Rhythms & Beats, her biggest challenge has been dividing her time between classes and taking care of her daughter. With the help and support of her family at home, she has been able to find her way.

The challenge with Tingle Your Taste Buds was to establish a subscriber base as there are multiple cookery websites out there. But she says that the simplicity of the recipes made them stand out, and appealed to people who didn’t know how to cook.

Since this startup runs only through its website, breaking even was another challenge.

"It took time to start earning through advertisements on the website. We overcame it by focusing on quality content, the right website design and consistent marketing," Anupama explains.

Beyond the Box, however, was the least challenging venture, since it did well right from day one, exceeding Anupama’s expectations.

“The challenge was to keep up with the pace at which things were growing and getting the right people to work with. However, I have found a wonderful team and am proud of them," she says.

Anupama says her daughter and husband have been her strongest pillars of support. Her husband has created the framework for her blog, and was very involved with setting up Tingle Your Taste Buds.

“He is also a great father who knows his responsibilities, because of which I have been able to do my work effectively over the past few years,” she adds.

But Anupama’s biggest source of inspiration and motivation is her daughter:

“I know she is watching and learning from me, and that’s why I always do my best. She understands my work even though she is just five years old. She feels proud when she sees her mama’s photo in a magazine or newspaper, or when I win an award. She says she wants to do the same kind of work when she grows up.”

Also keeping her on her feet is the recognition she receives for her work. Over the years, Anupama has won a number of awards, including Best Blogger of the Year Award 2018 at the Lady Boss Awards by Mompreneur Circle, and Best Food Blogger of the Year 2017 (Runner Up) at the Orange Flower Awards by Women's Web.

When asked where she sees herself in the next couple of years, Anupama says she hasn’t thought that far, and has always focused on the immediate next step - an approach which has worked in her favour.

To other women entrepreneurs trying to find their feet, Anupama offers some solid advice:

“Decide what your priorities are and stick by them. Plan your tasks accordingly. Spend time to learn about your line of work and industry scenario. Be aware and connect with your community. Collaboration over competition should be the mantra - support other women entrepreneurs.”

How Smita Bharti, a survivor of the domestic violence became a serial entrepreneur and social c...

The biggest factor in retaining women in tech is providing equality of opportunity, says Padmini Gopalakrishnan of AMD