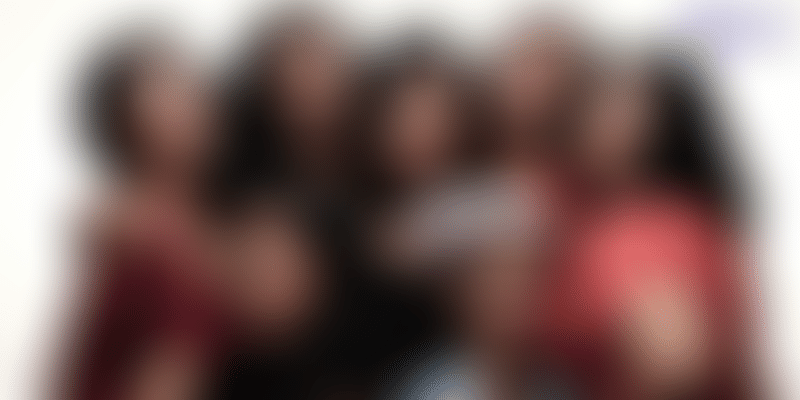 The Adamant Eves started with shows in Bengaluru in 2017 and are now set to perform at the Singapore Improv Festival. The group shares their fun and laughter-filled journey with HerStory.

Improv in India is at a nascent stage. It began to bloom at the same time as stand-up comedy but hasn’t caught up in terms of popularity. While stand-up is rehearsed and then performed, improv is an unscripted, spontaneous theatre form, says Balasree Vishwanath, the Artistic Director of The Adamant Eves, India’s first and only all-women improv troupe.

Everything that is performed on stage is from prompts and experiences of the audiences.

The Adamant Eves is made of six active members who work as full-time employees and theatre professionals by day who transform into improv theatre performers in their leisure hours.

The sextet is a part of a larger group, the Improv Comedy Bangalore. In mid-2017, they decided to experiment with an all-female cast after they noticed audiences would give gendered suggestions when they had a man and a woman perform on stage. This led to the experiment of The Adamant Eves that has now performed at several full house shows across the city, and in Mumbai, and Chennai.

Their most recent achievement for the group is being invited to perform at the Singapore Improv Festival, which will be held in November this year. They are one of only three Indian groups to be invited to the festival.

Balasree’s first tryst with improv when she was in the US pursuing a Master’s degree. She went to one of the improv workshops and was instantly hooked. She currently works as an analyst for a venture capital fund.

Aarti Shastry is a sales and marketing professional for whom improv is all about being vulnerable and showing that on stage.

“It has taught me lessons that I will take with me throughout my life. Improv to me is being powerful and embracing that which is not in my control,” she says.

Shweta Bhat is a psychological counsellor who started improv to have fun. Her interest piqued because to her the actor and the audience share the same amount of fun. After her time with The Adamant Eves, she believes improv is not merely a comedic effort but an opportunity to share and listen to much-needed stories, to share beliefs and conflicts with society, to be vulnerable and in the process, have fun and bond deeply.

A SEO analyst by profession, Laxmi Priya is also a playback theatre actor, facilitator, and tutor. She calls the improv troupe as “a group of women who are highly talented, in improv and otherwise and highly intelligent - you MUST hear some of our conversations” adding that she the journey is filled with laughter, tears and “many, many puns.”

Kavya Srinivasan, a theatre actor, playwright, and storyteller who teaches theatre to children and non-actors of all ages. The reminder to stay in the present is what motivates her to keep coming back to improv.

“In the last two years of performing, I have begun to see improv as a way of looking after myself while performing stellar shows for audiences,” she says.

Madhu Shukla is also a theatre practitioner along with being a coach and storyteller. She describes The Adamant Eves as a group of women who owned their creative expression and committed to co-creating and lifting each other’s strengths and mastery.

With their day jobs occupying most of their time, the rest is spent in either rehearsing, planning or doing improv shows. The group meets every Tuesday and Thursday for a couple of hours at one of the member’s houses for rehearsal.

But what does a rehearsal look like, for a performance that is made up on the spot?

“In tennis, you need to know how to play the back hand. However, during the match you don’t know what combination of shots you will have to make to win the match.” Similarly, the group practises various skills and formats of improv. Like the principle of ‘yes-anding’, which is essentially continuing the cue from one performer’s dialogue and adding to it. Just like sport requires hours of training to perfect a shot, delivery, layup or more, improv requires one to polish their skills frequently so as to be comfortable and confident when on stage.

With the popularity of the improv show, Whose Line is It Anyway?, improv is considered to be just comic improv. The troupe also experiments with theatrical improv. This has led the team to go past just delivering laughs and tackle social issues like casual sexism, gender discrimination, and give it a turn that they wish would happen even in the real world.

Do they face gender discrimination?

Not outright, they admit, Balasree says, “There is the unspoken expectation that we are a feminist improv comedy groups and that all of our shows are going to be men bashing. We have had people ask us questions like are men allowed to come to the show because we are an all-female group or are you going to be bashing men throughout the show.” Which is not true in either case.

Apart from quitting their day jobs and making improv their only source of income, the troupe has other plans too. Improv doesn’t pay enough right now, admits Balasree.

The Adamant Eves wants to bring improv closer to the Indian audience, include more theatrical improv, work with more formats, structures and bring more laughter to the audience.