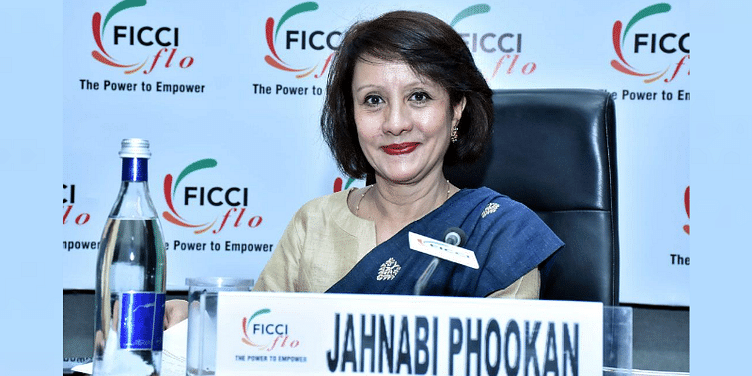 National President of FICCI FLO Jahnabi Phookan, who has more than three decades of entrepreneurial experience, speaks on sustainability as the way forward, digital inclusion of women, and more.

While the new normal of remote working across the world is hailed for increased opportunity for women to join the workforce, the COVID-19 pandemic has increased the burden of household responsibility.

Sheryl Sandberg, Chief Operating Officer, ﻿Facebook﻿and Founder of Lean In, a global community for women, reflected the sentiment during a media interaction and said, “We know that when things get hard, women get hit the hardest. We know that when there’s more work to be done like caregiving, women do it more. The double whammy of challenges in the workforce and challenges on the home front has never been higher.”

Jahnabi Phookan, who assumed responsibility as the President of FICCI Ladies Organisation (FLO) on May 21, 2020, says her vision for the decade is to prioritise sustainable practices and livelihoods for women. With COVID-19 pandemic breaking out in India in March, she emphasises that sustainability has become a priority like never before.

Taking on the role from Harjinder Kaul Talwar during the digitally held 36th FLO Annual Session, ‘Rising Above COVID-19 Challenges’, Jahnabi spelt out her aim of creating sustainable livelihoods for women by promoting entrepreneurship and professional excellence.

Despite being an organisation representing over 8,000 women entrepreneurs, Jahnabi shares, “It is a great organisation to belong to but there is so much to do. In fact, the first thing I told my team is that all of us are in a privileged position and we owe it to the country to do more.”

In the new normal of managing work digitally, Jahnabi is busier than ever before and says the positive outcome of COVID-19 and social distancing is being able to reach pan India through most of the organisation’s initiatives. This includes initiatives like the Eminent Women Series where they interact with inspirational figures like Zia Mody and Zainab Salbi, among others.

Jahnabi believes that promoting digital literacy can bring the economy back to entire India from the few metro cities of the country. Many educated women who are confined to their homes and unemployed can build businesses by finding the right networks online and new opportunities.

The organisation is currently focussed on driving digital literacy for women in the middle-income group through workshops on building businesses and mentoring them further along the way.

More recently, for many migrant workers who were rendered jobless in their homes in Tier II and III cities and who previously worked at malls, regional chapters of FLO have started an initiative to train groups of 20 women every month on two-wheeler riding. They are then tied up with e-commerce sites to cater to their marketing and other services.

“While there was no luck in Ahmedabad because women are not allowed to drive there, there has been an interesting transformation of mindsets among the family members when women become the bread-winner in such difficult times. It is really a case of ‘educate a woman, educate a village’,” she says.

At the same time, Jahnabi emphasised on the need for mental health support amid prolonged impact of COVID-19, especially in rural areas. Currently, most efforts are taking place at an independent level in various regional chapters with hospital counselling visits as well as sharing stories to raise awareness on mental health through radio communication.

“Discussions around mental health are more prevalent at upper middle-class level and we are trying to start the conversation in rural areas as well. We are also trying to work with NIMHANS to carry out the programme across different chapters in India,” Janhabi says.

The organisation is also pushing forward more women entrepreneurs to connect with potential investors and raise funds to scale their venture. Jahnabi also states that the organisation is also helping women occupy leadership positions in boardrooms and elsewhere including in the family businesses. This is done through a special programme with IIM Bangalore, aimed at helping women become competent directors or assume other leadership roles.

She adds that it is also for women who are already directors in PSUs to upskill and for entrepreneurs who aspire to assume such roles.

Born and raised in Kolkata, Jahnabi started Jungle Travels India in 1989 when terms like entrepreneurship and startup were not very familiar. However, she found her calling in entrepreneurship and went on to launch a river cruise company Assam Bengal Navigation in 2003 and KONYAK, a platform showcasing rich cultures of handicrafts and artefacts in the Northeast in 2008.

A member of the National Board of Indian Institute of Entrepreneurship (IIE) and a passionate advocate of women entrepreneurship, she founded the Northeast chapter of FLO in 2007.

She says, “Just as we say that a bird with one wing cannot fly, women that make up more than half the population of India must also be part of the growth story. And the new India of digital growth and Atmanirbhar must definitely pull it off.”