From COVID-19 vaccine architects to Nobel laureates in science, meet 7 women in STEM who made history 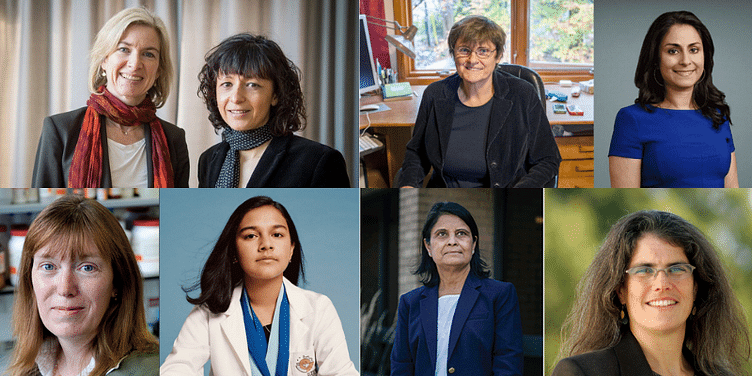 From a teen innovator to women scientists leading all the three major COVID-19 vaccines, these women in STEM are marking a giant leap for womankind.

In 1985 communist Hungary, Katalin Kariko lost her job at University of Szeged’s Biological Research Centre, where she was researching her newfound interest in RNA. The biochemist secured a job at Temple University in the US, boarded a one-way flight with money stuffed in her two-year-old’s teddy bear to escape the communist rule that did not allow taking money abroad.

In the US, she continued her research in RNA and 40 years later today, it has made one of the few leading vaccines against the COVID-19 pandemic possible.

In Sojitra village in the Indian state of Gujarat, four-year-old Nita Patel’s father was diagnosed with Tuberculosis. The father advised Nita to become a doctor and find a cure to such a disease. Today, in Maryland, US, she is at the forefront of leading an all-women team developing a vaccine to control the pandemic.

Then, meet 15-year-old scientist and innovator Gitanjali Rao who believes kindness and technology go hand in hand and can’t see it any other way.

For women in science, these are slow but steady and definite progress that the pandemic-stricken year brought to the fore.

Hailing from different backgrounds and across age groups, women have played critical roles in leading global vaccine development efforts, advising leaders on ways to contain the disease, and making breakthrough innovation in rewriting the code of life – a feat that made Emmanuelle Charpentier and Jennifer A Doudna the first all-women team to bag the Nobel Prize for Chemistry.

Lauding these achievements alone is good enough a reason to celebrate but there is more to it as seeing role models in what is considered a predominantly male bastion goes a long way in encouraging young girls to follow the footsteps in science and innovation as well.

As 2020 draws to a close, here is a look at women in science whose grit, perseverance, and using science for good is inspiring generations of young girls to believe that gender is not a barrier to success.

Emmanuelle Charpentier and Jennifer A Doudna

Emmanuelle Charpentier, a biochemist at UC Berkeley and Jennifer A Doudna, a researcher at Max Planck Institute took home the Nobel Prize in Chemistry in October this year. The duo was recognised for developing CRISPR/Cas9 genetic scissors, which is regarded as one of the sharpest tools in gene technology.

They met at a science conference and collaborated after Emmanuelle had published a landmark discovery on genetic scissors in 2011.

In what was called an epoch-making experiment, the duo reprogrammed genetic scissors and made it possible to rewrite the code of life.

The discovery in 2012 is credited to have helped with many other areas including curing inherited diseases, clinical trials in cancer therapy, and developing crops that withstand mould, pests and drought.

They are now the first all-female Nobel Prize winner for Chemistry.

“It is very important to provide a message that the ultimate recognitions are independent of the gender and that I think it’s most likely a very positive message for the girls and the young women who wish to start science, continue in science, that it is possible to achieve ultimate recognition even if you are female,” Emmanuelle has said.

56-year-old Nita Patel is leading an all-women team to develop the global COVID-19 vaccine as the senior director at late-stage biotechnology firm Novavax, based in Gaithersburg, Maryland in the US. She is also experienced in ground research for immunology, virology, and antibody development.

The immigrant’s journey from Sojitra, a farming village in Gujarat to leading what could be a potential end to a pandemic is nothing short of inspiring. When she was four years old, her father fell ill with tuberculosis (TB), unable to work and the family lived in poverty. His wish, however, was that Nita grows up to become a doctor and find a cure.

Nita too left no stones unturned – from reading her neighbour’s newspaper daily to begging them for bus fare to go to school and earning scholarships to pursue further studies.

Now, she holds two masters from Sardar Patel University in Gujarat and John Hopkins University in Baltimore, Maryland, and was earlier associated with MedImmune for over two decades.

Katalin Kariko is the woman behind the development of Pfizer BioNTech vaccine for COVID-19 that has been rolled out in countries like the UK and US, and others, including Mexico and Israel, will soon begin the doses.

Today, the Senior VP at BioNTech RNA Pharmaceuticals, Kariko grew up in the town of Szolnok in central Hungary and was always fascinated by science as a child.

The 65-year-old developed an interest in RNA while working at the University of Szeged’s Biological Research Centre, where she obtained her PhD.

In 1985, she lost her job at the university but continued to dwell on her interest as a post-doctoral researcher at the Temple University in the US. Forty years later, it has culminated into a vaccine with 95 percent accuracy to defeat the coronavirus.

The same year, Kalatin sold off her family car, hid the money in her two-year-old daughter’s teddy bear, and left the then communist Hungary for good with a one-way ticket to the US.

Astronomer and professor in the Department of Physics and Astronomy at the University of California, Los Angeles Andrea M Ghez became the fourth woman to receive the Nobel Prize in Physics.

While her fascination with the amount of information a star has to offer has taken her far professionally, Andrea considers it an opportunity and a responsibility to encourage the next generation of young women to become scientists.

A professor of vaccinology at Oxford University’s Jenner Institute, Sarah Gilbert is the woman architect of the Oxford-AstraZeneca vaccine that claims to be 70 percent effective to fight against COVID-19.

In 1994, she began working with professor Adrian Hill on a malaria parasite called plasmodium and eventually developed the ‘universal’ flu vaccine tackling influenza, Like Lassa, Nipah, CCHF, and Middle East Respiratory Syndrome (MERS), which is also caused by a coronavirus.

She is also the co-founder of Vaccitech, the institute’s spin-out company that develops immunotherapies and vaccines, founded in 2016.

Born in Kettering, Northamptonshire, the 58-year-old vaccinologist is also mother to triplets.

Celine Gounder dons several hats as an infectious disease physician, epidemiologist, filmmaker, and medical journalist and was appointed to Joe Biden’s National Pandemic Taskforce last month as a member of the Biden-Harris Transition COVID-19 Advisory Board.

A clinical assistant professor of Medicine at New York University's Grossman School of Medicine, Celine studied TB and HIV in South Africa, Lesotho, Malawi, Ethiopia and Brazil for over a decade between 1998 and 2012, and has served in various capacities in the medical community.

It was in the late 1960s that her father Raj Natarajan Gounder moved from Perumapalayam, a nondescript village in Tamil Nadu to the US. He pursued a doctorate in Materials Science and Engineering at Northwestern University in Illinois, and later worked at the Boeing Company.

Staying close to her father’s native village, she established the Raj Gounder Foundation to promote education through scholarships in 2018.

The teen scientist and innovator made headlines as the first-ever TIME magazine’s Kid of the Year from over 5,000 nominees. Gitanjali’s noteworthy work includes tech-based solutions to tackle contaminated water, cyberbullying, and opioid addiction.

The 15-year-old said that her generation is tasked with solving unprecedented problems and the existing issues of human rights violence, climate change, and the pandemic.

Gitanjali’s mission is to create a community of young innovators and problem-solvers around the world.