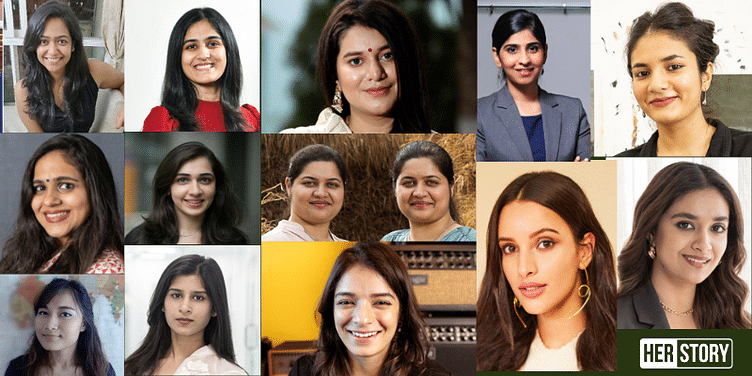 From YouTuber Niyati Mavinkurve to entrepreneur Neelam Jain creating inclusive workplace for LGBTQ+ community and actors Tripti Dimri and Keerthy Suresh, here are the women in Forbes India’s 30 Under 30.

Forbes India on Thursday recognised the young and enterprising talent of the country by releasing its list of 30 Under 30. Recognising personalities from across areas of entrepreneurship, digital content, art and law, the magazine said these achievers have taken on "challenges of a relentless year head on.”

Here is a closer look at the women who made it to the list:

Shefali Vijaywargiya (28): Shefali Vijaywargiya is the brand manager for Amul Kool with a keen focus on advertising, marketing, production and distribution. An MBA graduate from the Institute of Rural Management, Anand, Shefali joined Amul as an area sales manager in 2016.

Niharika Kapoor (28): As the APAC lead for YouTube community and social media operations, Niharika Kapoor is the youngest and first woman to lead a vertical business at YouTube India. An economics graduate from Lady Shri Ram College,  Niharika started her career as an associate account strategist at Google India in 2013. Two years later, she joined YouTube India as a partner manager.

Nishita Baliarsingh and Nikita Baliarsingh (both 23): Twin sisters Nishita and Nikita aim to power up electric vehicles with biodegradable batteries made from crop residue. The duo are making this dream for the e-mobility sector come true through their Bhubaneswar-based Nexus Power.

Niyati Mavinkurve (29): Niyati is one-half of Abhi&Niyu, whose informative videos have been engaging over a million followers on current affairs and prompting discussions on important topics like mental health and the ongoing farmer’s protest.

Poulomi Pavini Shukla (28): Supreme Court lawyer, author, and social worker, Poulomi Pavini Shukla from Lucknow is known for ensuring access of education to orphans . The author of Weakest on Earth- Orphans of India has been committed and working towards the cause for over a decade now.

Keerthy Suresh (28): Keerthy is a national award winning actor and daughter of producer G Suresh Kumar and actor Menaka Kumar. Witha keen interest in fashion designing, Keerthy is known for her roles in regional films like Mahanati, Geethanjali, and Idhu Enna Maayam, among others.

Tripti Dimri (26): Actor Tripti may be just three-films young but she has earned critical praise for her role in Netflix’s Bulbbul and Laila Majnu.

Keerthi Reddy Kotta (24): Keerthi aims to strengthen the supply chain to solve the problem of wastage when it comes to vaccine and food through her SAAS startup StaTwig, based in Hyderabad. She holds global masters in management from The London School of Economics and Political Science.

Vaishali Gupta (27): Vaishali Gupta is the co-founder and head of brand marketing at mCaffeine, a vegan personal care brand based in Mumbai. The entrepreneur holds a BTech in electronics and communication engineering from Indian School of Mines, Dhanbad.

Maalavika Manoj (27): Singer-songwriter and composer Maalavika, better known as Mali claims to be a storyteller and a musician. Based in Mumbai, she was earlier part of the underground band Bass-inBridge before going solo in 2011. She has sung for several Tamil films like Iru Mugan (2016) and Vivegam (2017).

Neelam Jain (26): A former financial analyst at Goldman Sachs, Neelam Jain is the Founder and CEO of PeriFerry, a platforms that empowers transgender people through training and employment. Founded in 2017, the Chennai-based venture strives to build inclusive workplaces.

Priyanka Das Rajkakati (29): With a penchant for creative expression, logical reasoning, and fascination with space, Priyanka is a PhD candidate specialising in aerospace engineering. Hailing from Assam, she has made headlines on several occasions. She was among the 75 women selected for Homeward Bound, a global initiative that conducts leadership expeditions for women in science to Antarctica.