In her second book of poems, Natasha Malpani Oswal explores the darker side of love, family, and ambition 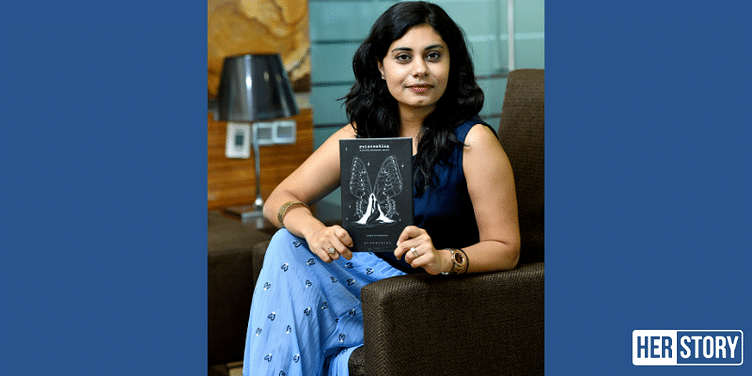 Poet-entrepreneur Natasha Malpani Oswal’s new book of poems, Reinvention, is all about coming of age, developing layers, shedding innocence, and learning about pain and betrayal.

In her first book of poems, Natasha Malpani Oswal encapsulated her journey of being away from her roots from the age of 20, discovering herself, and returning to where it all began.

The book took shape a year before her return to India, when she started writing little notes to herself capturing her thoughts, feelings, and emotions at that time. This led to Boundless, and an entry into a new chapter in her life.

In Reinvention, her second book of poems released last month, Natasha explores the darker side of growing up. She asks some pertinent questions like, “Can we preserve our identity, while building a family? What sacrifices do we have to make for success? Can we have it all, and keep it?”

Natasha calls herself a new-age storyteller, producer, and poet. She is the founder of Boundless Media, a production house dedicated to highlighting Indian stories that need to be at the forefront.

Previously, Natasha has worked at Dice Media, and been investor in London. She holds degrees from Oxford, Cambridge, and Stanford.

In a freewheeling chat with HerStory, Natasha Malpani Oswal talks about Reinvention, the book and of her life, and why we must celebrate being bold, colourful, and independent.

HerStory (HS) Your earlier book of poems, Boundless captured your journey of learning, losing, and loving. How did Reinvention come up?

Natasha Malpani Oswal (NMO): My first collection of poems, Boundless, captured my search for my own identity in my 20s as I built my career, and moved from India to London to California. I wrote Reinvention after moving back to India after 10 years of living abroad.

The transition has been both difficult and rewarding. I wrote these poems as I grappled with the idea of coming ‘home’ and ‘coming of age’.

Reinvention is my personal diary - it explores the darker side of love, family, and ambition. Can we preserve our identity, while being part of multiple families? What sacrifices do we have to make for success? Can we have it all - and keep it?

I titled the book Reinvention, because the book is about the power of embracing and leaning into change. Now I believe we can absolutely keep and amplify our voice - while staying connected to our roots. I think this is a bolder book, and hopefully reflects my own personal growth post Boundless.

HS: Can you describe your voice in the book?

NMO: At first, I worried about losing the identity I had worked so hard to build. Home didn’t feel anything like home when I moved back. I transitioned from being an investor to a producer and starting my own company and adjusting to two families. The chapters cover losing and rebuilding trust and relationships, and the dark side of home, love, and ambition, because this is what I was exploring at this time. The changes were huge - but have made me stronger.

I wrote the poems as notes to myself, because I wanted to keep the words as sharp and vulnerable as possible. I try to edit myself as little as possible. Poetry needs to capture your darkest thoughts and feelings. I put myself out there completely.

I have a very distinct style of writing - the words I use are hard-hitting, evocative, and have powerful imagery and rhythm, but are also very direct and simple. I think this maximises their impact. The poems are my truest voice - this is how I think.

HS: How important a role has reinvention played in your life?

NMO: I’m a big believer in the power of change. I love exploring new countries - I moved from India to London to California and back for my career - and ways of thinking - I transitioned from immunology to investing to doing an MBA at Stanford to media. Most of all, I love meeting new people and learning new things. I think you can absolutely shape your life, if you yourself are open to being changed.

I think the adage 'survival of the fittest’ is true - I want to stay adaptable and constantly evolve. I was a much more introverted child; I was so focused on pleasing others. It’s only when I began to embrace the power of change that I realised that life contracts or expands in accordance with your mindset.

HS: Was writing this book of poems a sort of catharsis? Has it helped you with healing of some sort?

NMO: Absolutely. I think poetry is the most honest and raw form of self-expression. I find the process very freeing - it’s a form of therapy. When you write down your darkest thoughts, feelings, and fears, you're able to see them from a distance.

This book is about coming of age - and all growing up is sad in a way. You’re developing layers, shedding your innocence, you learn to hide what you really think or feel, you learn pain, betrayal- but you also learn who you really are, who you can really trust, what you really want.

In ‘Boundless’, Natasha Oswal of Dice Media captures a decade of self-discovery and learning

HS: The book also has a brooding tone to it. Has the pandemic to do anything with the way you feel?

NMO: I wrote Princess, Starry Night, and Girl while I was trying to come to terms with how much more my looks, clothing, and appearance seemed to matter than my work or thoughts. We are too often expected to ‘smile’, look pretty, and ‘be nice’, rather than say and do what we really think or want to as women. These poems are a tongue-in-cheek response to society’s expectations, and a call for us to speak up.

It’s time we celebrated being bold and colourful and independent. I think my favorite poem might be Sparkle, because I only started discovering my own power when I stopped trying to fit in - and embraced standing out instead.

The pandemic has definitely given me perspective. It’s forced me to pause, and really look at my relationships. I think situations like these show you the importance of real friends and family. I think you have to be truly vulnerable; you have to bleed on to the paper.

HS: You also speak of bonds and ties? How important are they to you, personally, the cords of life?

NMO: I’ve intentionally called relationships ties and bonds in the last chapter. The people who love you and care for you want you to be there for them, to give to them. It’s what makes life worth living - but can also hold you down and back. You need to make space to grow, to think independently, take risks, and make your own path and decisions. I think building close relationships and a community while charting your own path is a very delicate balancing act.

HS: How important is storytelling to you? Do you find poetry a good medium for this?

NMO: Fiction is sometimes more real to me than my real life; I think the most truth lies in fiction. I’ve been writing since I was a child - I published my stories all through school and college. Hilariously, the first ‘book’ I wrote was an autobiography when I was four. I have no idea what stories I told to fill the pages, given how limited my life experience was. I’ve also always been an obsessive reader. Growing up, my punishment was having my library card taken away when I broke the rules. In retaliation, the first ‘startup’ I built was a library when I was nine.

Growing up, I mostly wrote short stories about coming of age, family, and friends. I also wrote articles for newspapers and online portals, and dabbled in poetry, but wasn’t bold enough to show the poems to anyone else. I wrote the poems under a pen name.

My favorite authors were Jhumpa Lahiri, Chimamanda Ngozi Adichie, Lionel Shriver, and Zadie Smith. I read The Namesake and Americanah so many times that I had paragraphs memorised. I enjoyed immigrant fiction even before I left the country - a part of me felt like an ‘outsider’ even before I left home. I’ve always enjoyed dark and twisted stories- it took me a while to learn that sometimes life can just be simple.

NMO: I run Boundless Media, a creative house. We make high-quality shows and films that are locally rooted but resonate globally. Our stories are for and by a new India. I’m very excited about the slate we have for this year - we have a dark comic show, a feminist film, and an animated film coming up soon.

We really pour ourselves into our creative projects because we believe stories resonate and connect with people when they have truth in them. I also have a podcast.